Nomination Day – As It Happened 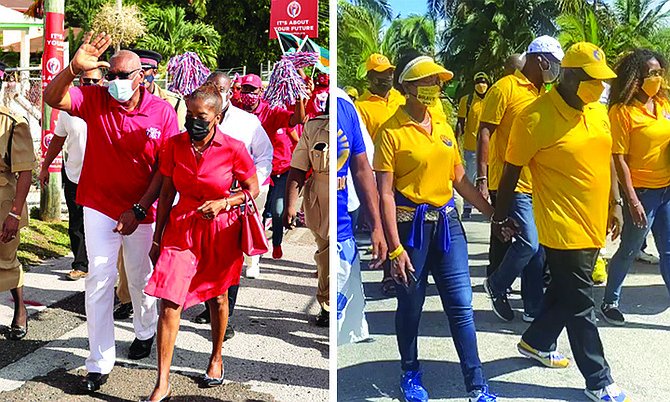 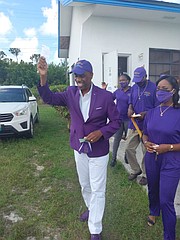 12.00pm: Frederick McAlpine nominating as an independent candidate in Pineridge. This means he is officially no longer a member of the Free National Movement. He had a large crowd of supporters with him. Photos by Denise Maycock.

11.30am: Motorcades for Mount Moriah MP Marvin Dames and PLP candidate for the constituency McKell Bonaby.

11.20am: Elizabeth MP Dr Duane Sands pictured below before and after nomination.

11.10am: PLP Leader Philip ‘Brave’ Davis after his nomination.

11.10am: Prime Minister Dr Hubert Minnis pictured during and after his nomination 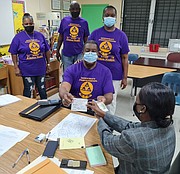 11.00am: PLP candidate for Killarney Ronald Duncombe and House Speaker Halson Moultrie, candidate for Nassau Village, pictured after their nominations.

10.30am: PLP Leader Philip ‘Brave’ Davis speaking before going in for nomination at Cat Island, Rum Cay and San Salvador.

Supporters on the street in Bamboo Town

10.30am: FNM and PLP supporters backing their respective candidates for the Bamboo Town constituency.

10.25am: Pallis Lockhart from the Kingdom Government Movement party arrives with supporters to nominate herself for the Bamboo Town constituency.

10.15am: Desmond Bannister's arrival (left) and his presentation of finances and documents by nine-year-old Tyronique Taylor, a Gerald Cash student (right).

10.05am: Prime Minister Dr Minnis has officially nominated. Asked why he called an election as cases surge, he said as the campaign rolls on the reasoning behind his decision would become evident.

10.00am: Patricia Deveaux and the PLP motorcade arrives at Carlton Francis Primary to nominate for the Bamboo Town constituency

9.55am: Prime Minister Dr Hubert Minnis arrives to nominate in his Killarney constituency.

9.45am: An FNM motorcade arrives at Carlton Francis Primary School to escort Renward Wells, as he officially nominates himself for the Bamboo Town constituency.

9.35am: The arrival and nomination of Keith Bell, the PLP's Candidate for Carmichael. (Photos by Tanya Smith-Cartwright)

9.30am: Arinthia Komolafe is officially nominated as the DNA Candidate for Carmichael while Junkanoo music roars outside (Photo by Tanya Smith-Cartwright)

Is the law limiting the total number of campaigners to 5 vaccinated individuals not applicable in this case? Or is covid less transmissible during nomination celebrations?

This article says so much while saying nothing. Very interesting. Free cowbells for everyone.

And the winner is COVID. Well done all those idiots who want to be MPs so bad they are willing to put peoples lives at risk. At least we know for sure you don't actually care about the Bahamian people.

Mean the whilst in Live Updates this Nomination Day — uphill in the Guardian's radio studio - The Revolution with the well-rested talkie show host, Comrade Juan McCartney, — (paid sponsored) by Thee Mr. Mnnnis's — Red Party. — The Bank of Bahamaland, and Sominex. — If Truthout, — you just don't have to make this stuff up.— Yes?

How many people signed their death warrant today with this madness

Expect the Covid cases to double next week and triple after election. Minnis led y’all to the slaughter! And Brave did no better. Get the refrigerated containers ready for dead bodies

@ComradeJohn, back during the late months of 2020 — Yours Truly, — was warning that unless the RedAuthority — was to alter their rotten COVID ways that — the COVID — 2021 deadeds' count — could very well be expected rise to the — Thousand+ count— Yes?

Obviously as long as you are a politician in the Bahamas you and your entourage not only you are immune to Covid but you are allowed to do as you wish. For the rest of us more restrictions and maybe a series of lockdowns may be necessary in the future. Do not forget all the decisions are made out of an abundance of precaution and after consultation with medical experts.

Can we get a vaccine to rid us of these terrible leaders we have? I will sign up for that tomorrow emergency use or not.