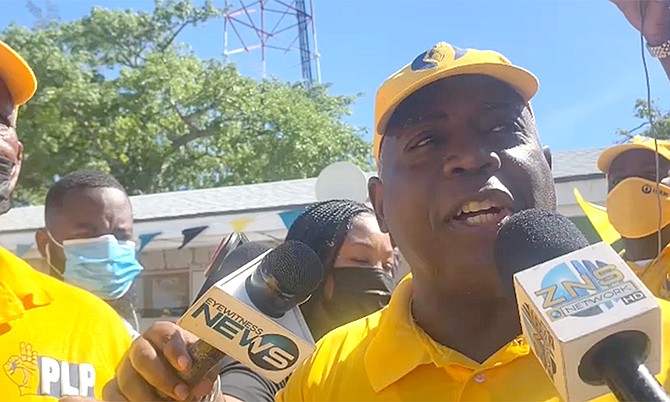 Mr Davis, who nominated himself on Friday for the Cat Island, Rum Cay and San Salvador constituency, expressed confidence in a general election victory.

“We are in a dark age right now and we are ready for the task,” Mr Davis said on Friday.

“I’m very confident that the country recognises a change is needed and the change that they need is right here,” he said, when asked about his chances of becoming prime minister.

“That’s why (I) invite the Bahamian people to get to know me. The Cat Island, San Salvador people, Rum Cay people, they know me. Get to know me as they know me and they will be assured their future and their livelihood will be in good hands.”

Mr Davis, along with other candidates—the Free National Movement’s Felicia Knowles and the Coalition of Independent’s Angelino Cooper—made their way at different times to the administrator’s office New Bight, Cat Island on nomination day.

With cowbells and music, the PLP leader came to the nomination site in style. There was a sea of yellow with supporters decked out in “A New Day'' shirts. Mr Davis was also accompanied by his family.

While speaking to reporters, he hit back at his detractors about infrastructure issues in his constituency by pointing to developments that were being done by the Christie administration, but stopped after the FNM won the 2017 election.

“If they are criticising me for the state of anything in this country, let them accept that I’ve done nothing but (what) have they done in the last four years?” he questioned.

“The state of this country, the state of this island and my constituency period is a direct result of the government targeting me but hurting our people and if you want to see the evidence of it let them take you to Orange Creek. No proper clinic and we were building a clinic - they stopped it. Go into Smith’s Bay - we were building a clinic. They stopped it…From four years now, asked them what have they done - nothing.”

He also raised concerns about the election in this period of COVID-19.

“We have to be safe, continue to be safe. We have to ensure that we do not allow this COVID experience to suppress the vote. The prime minister called a snap election at this time when the COVID-19 virus is surging. We need not to allow that to prevent people from going to the polls.

“I’m concerned that they set up the proper protocols so that even persons that are quarantined are able to vote safely - they can do it. Even those who have COVID and are not hospitalised they ought to be able to come and vote as well and done safely.”

Meanwhile one of his opponents said she is “ready to take these islands into the FNM party.”

“I have the support. I am a Cat Islander. I have family from the north to south…I’ve been (to) Cat Island every summer break. I come here every year. Not once a year, multiple times of the year. So stronghold it used to be and it’s not representative of a stronghold,” Ms Knowles said.

She added: “All this supposed stronghold needed was somebody who has a true love for the island, has an appreciation for the battle the people have been through for the past 20 years and who actually has a plan to bring this island and make it a jewel that is in The Bahamas.”

To show that she is serious, Ms Knowles even moved to Cat Island permanently.

She explained: “When I audited the islands and I recognised the need, I felt the only way you can improve that need is if you experience the issue with the people. So in order for that to improve if it’s impacting me - it’s impacting them.”

The Coalition’s nominee said the new group has support from older people.

Mr Cooper said: “I feel quite confident right now because as you know the country needs a change many persons think that nothing can take place but I always tell people this time is longer than rope and I believe that the PLP time is up in this country and especially in this constituency and The Bahamas has no choice but to go for change.”

We consulted a number of unbiased psychiatrists specializing in physiognomy who took a look at different photographs of Mr. Davis with the view towards assessing his character.

The uniform conclusion from these experts is that Mr. Davis is a dishonest man who cannot be trusted. Furthermore they said that they came to the conclusion by looking at his eyes which indicates dishonesty and the shape of his head.

When we told them that he was running for political office as the leader of a political party they all agreed that this man will be bribeable and amenable to seeking political kickbacks.

Where did you find the phydionomists? Interned in an asylum or through a ouija board?

Do you care to share the results for rensward and minnis so we can better judge the physionomists abilities?

Thanks for asking. We only sent photographs of Mr. Davis and Dr. Minnis.

The assessment of Dr. Minnis was that his face demonstrated the qualities of a true leader. The smile on his face indicated honesty, sincerity and insightfulness. They went on to say that the shape of his head showed that he was intelligent and educated.

They did say that because he was good looking he would be attractive to females. And this could be a problem for his wife.

Your consultation with Daffy Duck, Yosemite Sam, and Wile Coyote are very much appreciated!!

We ca all rest assured that although Brave Davis could not stop the dump fires for 5 years, he is now ready to resolve the entire countries post pandemic issues.

Just wondering what shape YOUR head is??

Bahamians are of no consequence in the "fool's game" of Politics in the Bahamas. Footstools, ascending street tugs, and some may say criminals to the highest state office; the five year game of transforming once nobodies into an elite class while opening opportunities for themselves and not the people they should serve.

The poor, old and dying sit by in awe as wealth and access becomes a spectacle in this "fools game" just one more time with the hope of something different. But only the abuse where there is no accountability takes a new face in the "fool's game" of Bahamian Politics.

We will not lite our torches this election. PLPs just need to come out strong.

Whomsoever wins be it PLP or FNM they all face the same problems of huge national debt and the difficulty of replacing decaying buildings. In fairness had the PLP been in power for the last three plus years can they state with absolute clarity how they would have handled the devastating hurricane and the equally devastating covid epidemic and done it without incurring massive debt. What the average Bahamian seems not to realise is that running a country comes down to basic financial maths. Income in - expenditure out. If you spend more than you earn then you have to borrow. Its that simple whoever you support.

The Queen's spoken — EligibleVotePopoulaces — is all ready for the much anticipated live 2-Hour leaders debate between the equally grammar deficient, unexcitable Thee Mr. Mnnis and Brave, — doesn't get to be, — yes?