Insight: The Lessons Of Afghanistan Should Not Go Unheeded 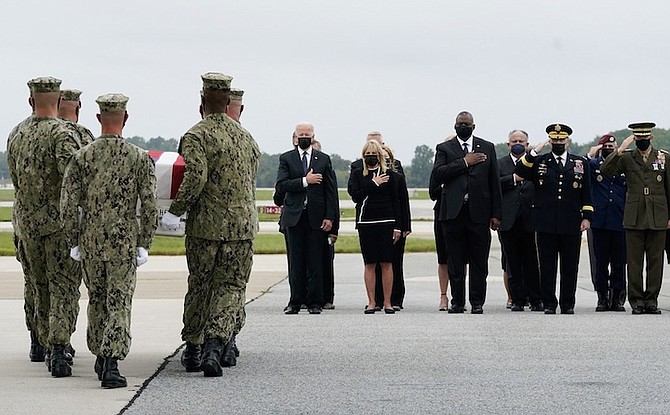 PRESIDENT Joe Biden watches as a Navy carry team moves a transfer case containing the remains of Navy Corpsman Maxton W Soviak, 22, of Berlin Heights, Ohio, at Dover Air Force Base, Delaware yesterday. According to the Department of Defense, Soviak died in an attack at Afghanistan’s Kabul airport, along with 12 other US service members. Photo: Manuel Balce Ceneta/AP

Chinese ambassador to The Bahamas

The heart-wrenching scenes in Afghanistan in recent days, which culminated in horrendous terrorist attacks in Kabul airport, sent shock waves across the world and generated much soul-searching in the West. The chaos, desperation, and uncertainty unleashed in the aftermath of Taliban’s rapid take-over of the country was rightfully interpreted as a drastic policy failure of its foreign occupiers.

Afghanistan hasn’t got its reputation of “graveyard of empires” for nothing. Following the footsteps of ancient Persians, Greeks and Arabs, the British, Russians and Americans in recent decades have one after another ran into a stone wall in Afghanistan. The country’s harsh terrains, inhospitable weather, fragmentation along religious, ethnic, tribal and warlord lines, coupled with a geo-strategically complicated neighbourhood, have made it hard enough to conquer but almost impossible to occupy.

Fighting terrorism through military occupation has backfired. And the attempt to bring western-style democracy as an underpinning for counter-terrorism failed. For all the intentions of outside troops to go in to “help”, the perception of the locals

is that foreigners are coming into their country to kill their people. This makes the military mission a self-defeating exercise. When bombs are dropped from the sky and doors are broken into at any time, what use is there to talk about protecting Afghan women and children?

The occupation has not produced self-sustaining governance or alleviated the sufferings of the Afghan people. For the majority of Afghans, supporting the Taliban and rejecting foreign intervention are two sides of the same coin. They chose the Taliban over foreign forces, not because everyone loves the Taliban, but because the Taliban is more preferable to foreign forces and their proxies who are seen as inept and corrupt. The Taliban in the meanwhile has changed tactics by reaching out to other ethnic groups and regional rulers to build support. It has also sent messages about inclusive government and more respect for women.

So far the soul-searching in the West has been largely focused on the lack of planning for the retreat and on not finding a more effective and less corrupt partner in the Afghan government who could resist the advancing Taliban.

Yet the fundamental issues are two-fold. First, what is the chance of success if one tries to simplistically apply foreign models to countries with completely different historical, cultural and national conditions?

It’s like plucking a flower from its roots and putting it in a vase for display. The flower may look equally fresh and appealing, yet once the water in the vase runs dry, it will wither away.

In fact, it’s hard to think of many success stories whereby replicating western-style governance without a proper institutional foundation has led to lasting peace, protection of human rights or prosperity for the local communities.

At the end of the day, it is up to the people of any country to explore the right political system and path of development suited to their national conditions. That’s the true spirit of democracy. Outsiders can provide constructive help, but not do the job for the locals or impose solutions.

And two, what is the chance of success if one fights terrorism without addressing the underlying needs of nation building?

According to Professor Jeffrey Sachs of Columbia University, only two percent of US spending in Afghanistan went into infrastructure and poverty reduction programmes. Such meagre generosity wouldn’t create a strong sense of stake among the local people in the success of the foreign-led mission.

Almost always, the cost of military intervention dwarfs the gains.

Despite two trillion US dollars funnelled to Afghanistan and 2400 military casualties, the number of terrorist organizations in Afghanistan increased from a single digit number to more than 20 in the past 20 years. Tens of thousands of ordinary Afghan people were killed in the name of counter-terrorism. More than 10 million became refugees in their own country, and economic losses were estimated at 60 million US dollars a day.

This shows that simplistic and arbitrary application of force can not tackle the root causes of terrorism, which has a lot to do with poverty, backwardness, and ethnic and sectarian strife. In a delicate international and external environment such as the one in which Afghanistan finds itself, moving in with overwhelming force is similar to unleashing a bull into a china shop. The rampage would trigger greater antagonism towards outside forces, makes extremist ideologies even more appealing, and end up creating more problems than they purport to solve.

At the end of the day, there is no magic cure to the terrorism scourge. It is a contest of strength, will and stamina. The perceived justness of the cause and support of the local people hold the key to counter-terrorism success. It has to be a people’s war underpinned by a combination of political, economic, security and social strategies that seek to address both symptoms and root causes. It must be led and owned by the country itself and supported by international cooperation.

The 30 million plus Afghan people deserve better. They have known nothing but turmoil and deprivation in the past four decades. With the Taliban in place, there is a real chance the Afghan-led, Afghan-owned process can be implemented on the ground.

For all the misgivings expressed about the Taliban, given the fast-evolving situation on the ground, the world should give it the benefit of the doubt and work with it to facilitate a peaceful transition and help with the reconstruction of the country while respecting the sovereignty and the will of the Afghan people.

The situation will remain fluid and uncertain for many months if not years to come. The key factors to look out for would be: one, whether the Taliban would be able to restore peace and put in place an open and inclusive political framework; two, whether it will follow moderate and steady policies; three, whether it will commit to fighting all terrorist organizations in the country, such as the IS-K (Islamic State-Khorasan) who perpetrated the deadly blasts at Kabul airport, and protect Afghanistan from again becoming a haven for terrorists.

The Taliban has its work cut out for it. The prospect of continued turbulence, localized civil wars and economic collapse are real and the risks are growing.

The pressing task at hand is for the United States as the dominant power who started all this to sort out the chaotic situation at Kabul airport and work with the international community to deliver emergency economic and humanitarian assistance. Rather than making a hasty retreat that will only be exploited by terrorist organizations, US and NATO forces should withdraw responsibly.

China’s State Councillor and Foreign Minister Wang Yi assured the US Secretary of State Anthony Blinken of China’s readiness to work with the United States to promote a soft landing of the situation. He urged the US to continue assisting Afghanistan in suppressing terrorist violence while respecting the country’s sovereignty and do so without applying double standards or a selective approach.

As a close neighbour and sincere friend of Afghanistan, China will continue to encourage peace and reconciliation in Afghanistan and provide whatever help within our capacity to facilitate economic recovery. Afghanistan’s other neighbours and the wider international community who all have a stake in a peaceful and stable Afghanistan also have a positive role to play through offering help and assistance.

This is not a time for a new geopolitical game in Afghanistan. The talk about a void opening up is premature, if not downright irresponsible, and it would be too early to predict the end of the international order as we know it. No one knows for sure what tomorrow will bring to this war-torn country. Yet it would be beneficial to the world if the lessons of Afghanistan are heeded and future tragedies avoided.

Not really sorry for the USA they have a bad habit of going into other people countries and forcing their way of life and thinking on persons, well the Taliban and Afghanistan showed them good, I can bet they didn't fly any rainbow flag there during the time they boldly flew it here, they bully weaker countries, so its good to see them get a taste of their own medicine and hang their heads in shame.

Just surreal, watched too many movies going back decades that resembled the news footage. was kinda unbelievable to see a tarmac full of native people fighting to get out with the Americans... in 2021

I guess we'll see what they want to be shortly