‘I’Ll Do My Best As Acting Pm’ 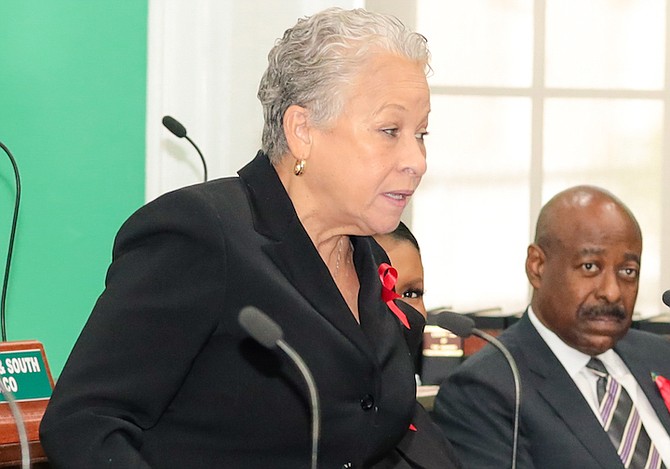 GLENYS Hanna Martin in the House of Assembly.

ACTING Prime Minister Glenys Hanna Martin says she plans to do her best serving as the country’s leader during the next few days.

“(It’s) very weighty and very serious even though it’s just for a fleeting moment in time,” Mrs Hanna Martin told reporters when asked how she felt about the role. “It’s a hefty obligation and I take it very seriously.

“I’ve been sitting in Cabinet now for several terms. This is my third term. This is an awesome experience. I haven’t had it yet. I’m going to go do it now, but I’m very respectful of where faith has brought me and I’ll do my best.”

On Monday, Prime Minister Phillip “Brave” Davis left the country to travel to Barbados to observe the nation’s transition to a republic. Foreign Affairs and Public Service Minister Fred Mitchell and Seabreeze MP Leslia Miller-Brice accompanied Mr Davis who is expected to return to the country on Friday.

Mitchell in Barbados to meet and tell Prince Charles that The Bahamas will also soon be seeking to transform itself into a Queenless Republic, and Cooper in Switzerland to open numbered banked accounts.

No need to worry though because Madame Atlas has the enormous weight of The Bahamas on her very capable shoulders. LOL

When the US President leaves the country does he name someone else as acting President? Is there really such a thing as an acting PM? Guess the operative word is acting. It is a pretend game

But all of this is to prepare her for one day becoming Governor-General after The Bahamas becomes a Monarchless Republic. LMAO

@ComradeMoncurcool, the risks that the Prez or even his vice face any time they travel just outside Washington presents such an increased security risk.
To have them both traveling abroad at the same time is a security risk that most administrations don't take -- that something tragic could happen to both of them, leaving the presidency in the hands of the third in the presidential line of succession. In this case, House Speaker, Nancy Pelosi.
Thank you but me think's, we own Popoulaces, would much prefer being temporarily ruled by this Madam. That Madam is goin' require some awakening to abide by new Law and Order before her House's rules the 38 MPs',― Yes?

Mrs Hanna Martin will do a great job. There are certain inborn qualities that no one can take away. she has those.

But definitely not innate! LOL

Already got their noses in the "benefits trough". All that time in Barbados and taking a wife to Switzerland plus all the add on individuals. No doubt first or business class and nice hotels and certainly a large daily allowance. Oh add in a very very cursory customs check upon return. Great work if you can get it.

Well as a sitting Cabinet Minister Mr. mitchell has the privilege of traveling to different countries for government business.

Let him Zoom and not bring us Omicron. LOL

Youse comrades soon goin' see if the House's Madam Speaker as one who aggressively demands respect for her office... So, will she or won't she...Extend as much respect to the House member for Englerston,and everything else like she's many rules on this and that by squinting her eyes as she addresses the honourable member as, Madam Prime Minister, ― Yes?