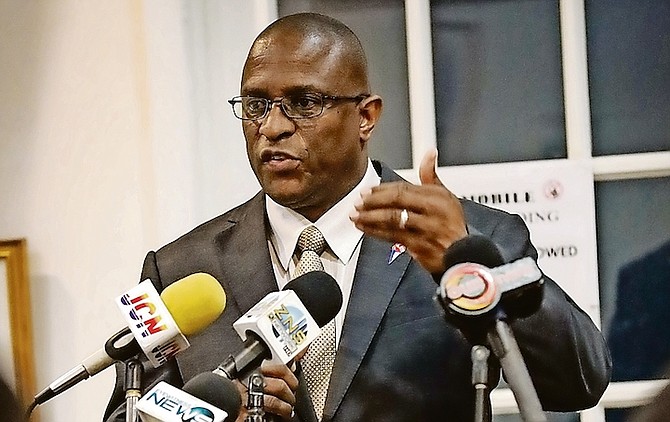 The entity is cancelling all contracts after an operational review raised numerous concerns about internal controls.

Officials say contractors who can comply with Know Your Customer rules will be paid.

Nonetheless, Mr Pintard said yesterday: “The government needs to be explicit. What is the timetable that they are going to follow to pay the Bahamians who have worked, some of them who have not been paid since July for the work that they have done maintaining parks and other facilities. It is absolutely important during this difficult period when many families are hurting for the government to be absolutely clear on when they intend to pay these Bahamians.”

Mr Pintard did not give an overall view of the report, which was conducted by K Christie and Co Chartered Accountants and made public on Friday.

“In January the government has promised to lay the final report,” he said at a press conference yesterday. “We are studying the report we received shortly after the members of the media received it. If you were to refer to Mr Cartwright’s comments in the House of Assembly, I thought he laid out a compelling case to explain some of the items that were already mentioned in the press briefing of the government. Once we have had a chance to study it, we intend line by line to offer a response to what has been contended in the report but by those persons speaking at the press conference as well.”

St Barnabas MP Shanendon Cartwright was Executive Chairman of the authority during the period of the review.

In a short statement yesterday, he said: “I note the contents of the distributed report. On assuming office as Executive Chairman of the Bahamas Public Parks and Public Beaches Authority in August of 2017, and throughout my tenure, established procedures were followed. Notably the report indicates that ‘most contracts adhered to the documentation requirements of the authority.’ I look forward to the completion of the government’s assessment on this matter at which point I will respond accordingly.”

Michael, please, read the brief. They g'un get paid if and when their contract is verified. That shouldn't take a while. Now, talk about who owes the government for breach of the verified agreements.

lol Pintard really is making the fnm look bad man. Like they gone from papa baby to lil baby lol.