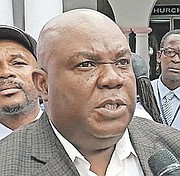 Bahamas Taxicab Union (BTCU) yesterday cautioned against price gouging in the sector, encouraging visitors to check the rates prior to getting into a taxi.

Wesley Ferguson, its president, told Tribune Business about price gouging he understands is taking place at the Sir Lynden International Airport (LPIA) -  but he doesn’t blame taxi drivers for this confusion.

He said: “Sometimes you have to figure out what the visitors did before they got to the hotel. It is not always what the visitors say and then sometimes these people get into these SUVs. This is one of the things we have a problem with; we are having a problem with these SUVs operating from the airport as taxis, because once tourists get in these SUVs they will overcharge these people: they don’t tell the people how much it is going to cost them until they get them to their destination.”

He added: “Then you have a situation where passengers may want a ride to Paradise Island and it may be five or six of them, but they have to understand that each additional person after the first two is $4. So you have to take that into consideration as well.

“Then sometimes these people make a bunch of stops. Sometimes they would stop to the liquor store or the food store and they figure it is the same price. So you have to find out if these people made stops on their ride from the airport or they had more than two passengers for the taxi ride. All of this adds to the cost.”

Calling the SUV issue a longstanding and “vexing” issue at the airport, Mr Ferguson said: “This is why we have been trying to get the government for years to regulate this system. So it could be a clear decisive system at the airport: What kind of car you are getting into, what you are paying to get where you’re going and so on and so forth.”

Mr Ferguson also said: “Let me explain it to you because a lot of people don’t understand, the average rate for a taxi van right now is $75 per hour. So that means that if you were in that taxi for an hour for whatever reason, notwithstanding traffic, but say for example I took a fare from the airport and we stopped to the liquor store and it was just for ten minutes, but by the time we got to the hotel you have spent an hour in my car that’s $75. This is just for a taxi, but it is $100 for the SUV even though they may cut the passenger a break on the fare.”

Visitors have to be careful when coming to the airport and deciding to take an SUV over a regular taxi, Mr Ferguson warned.

“They jam up at the door and they hustle you into their cars. They would offer you to ride in an SUV and as an unsuspecting tourist you may be tempted to take a ride in an SUV because they think it may be a taxi too, but when you get to the hotel the guy hits you with the $75 price despite taxi fares being advertised online as $35. The SUV driver won’t tell the tourists that he is just an SUV and not a taxi driver so the taxi drivers have to take the fall for that.”

The government needs to be more involved in the taxi system at the airport, Mr Ferguson lamented.

“They don’t see the urgency or the importance of regulating the system at the airport,” he said.

“We’ve been fighting with them for years, but for popularity and for fear of losing votes they have decided to let it ride and let it take care of itself, because if I am the minister and I make a powerful decision to do it right then I will not be popular anymore. So they would rather to remain popular than try to find a resolution to the matter at the airport taxi system.”

Right now taxis have a system where they line up and the first taxi in line gets the fare, but for the SUV’s they are supposed to have a special waiting area and if a tourist requests an SUV then they are called up from their designated waiting area.

Mr Ferguson said: “I want those SUVs to go and operate like they are supposed to in the holding area and not in front of the airport door, hustling for work. So when I come outside whoever is responsible will say we have taxis available, but if you want an SUV that is also available at a particular price and then give the tourists the price.”

Where? The entire island from Super Value to Atlantis price gouges. Where exactly are we worried? New providence is a resort. We live on a resort, everything is expensive.

bahamianson truth be told most taxi operators have been price gouging for over a decade especially the ones who have the vans and the luxury SUVs. For instance I remember one time when a came from the family island and I hiked a taxi because my father was unable to pick me up however the taxi driver ended up charging me $60 from the Airport all the way to Cable Beach which I'm pretty sure isn't an hour ride.

"The government needs to be more involved in the taxi system at the airport, Mr Ferguson lamented.". ABSOLUTELY!

A taxi driver wanted to charge me $26 to go from domestic arrival to Jet Nassau Aviation.

The government needs to reimplement a mandatory metering system.