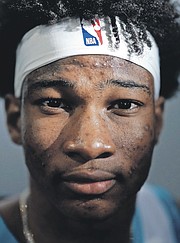 KAI Jones is currently in the midst of a productive stretch with the Greensboro Swarm in the NBA G-League. (AP)

KAI Jones has fluctuated between the Charlotte Hornets’ main roster and the G-League affiliate Greensboro Swarm for much of the season.

Jones is currently in the midst of a productive stretch with the Swarm and finished with 11 points, six rebounds and a team high three blocks in 27 minutes of a 113-103 loss to the Iowa Wolves Tuesday night in the AT and T Showcase at the Mandalay Bay Convention Center in Las, Nevada.

In the first game of the showcase, Jones finished with nine points and five rebounds in 23 minutes off the bench in a 122-118 win over the Memphis Hustle.

Since his return to the G League, Jones also had 16 points and seven rebounds in a 108-99 loss to the Mexico City Captains on December 11.

In 8 G League games this season, Jones is averaging 11.3 points, six rebounds and 1.8 blocks per game on 60 percent shooting from the field.

In November, Jones had the opportunity to record a career milestone with the Hornets in a callup to the NBA.

Jones scored the first points of his NBA career in the Hornets’ 133-115 November 26 win over the Minnesota Timberwolves at the Spectrum Center in Charlotte, North Carolina.

Jones scored a late dunk with an assist from fellow rookie James Bouknight. The No.19 pick in last June’s Draft, Jones played sparingly before he was assigned to the Swarm.