FRONT PORCH: In a time of despair came the hands that brought hope

“In this age of great cynicism, political silliness, and wide-spread negativity, it was singularly uplifting for me to work alongside these dedicated and indefatigable front-line workers. They are a source of profound inspiration for me. I admire them deeply and I encourage Bahamians everywhere to thank them for what they did. They averted a national crisis, and the nation owes them a great debt of gratitude.”

In early 2020, the COVID-19 pandemic, one of the great historical pandemics, shattered then shuttered the global and national economy. International tourism came to a dramatic and unprecedented halt. Much worse than in the 2008 Great Recession, the Bahamas economy collapsed within months.

The loss in GDP, tourism numbers, government revenue, savings, and other chilling statistical declines was equally measured in increased unemployment, greater personal and business debt and food insecurity for tens of thousands of Bahamians, many of whom were always a pay cheque or two away from requiring assistance.

The pandemic exposed the degree of poverty and social inequality in the country. The Hubert Minnis Administration had to act quickly. It had to go big to provide unemployment, economic, business and social assistance.

Nearly 100,000 Bahamians would eventually need sustained food aid across the archipelago. At the height of the public health crisis, 57,000 households registered for food aid.

In the spring of 2020, a massive public-private partnership, the National Food Distribution Task Force (NFDTF), was constituted in response to the greatest socio-economic and food crisis in the nation’s history.

It would turn out to be a $54 million intervention, “and likely will be remembered as the largest and most successful social aid programme in our nation’s history.”

Critically, many migrants in need were also provided with food. 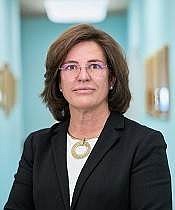 During 2020 it included the Bahamas Feeding Network, the Grand Bahama Food Assistance Committee, Hands for Hunger, IDEA Relief, Lend a Hand Bahamas, One Eleuthera Foundation and the Bahamas Red Cross. An army of volunteers supplied the dedication and energy required to make the programme an extraordinary success.

The NFDTF required an extraordinary leader, a no-nonsense individual with business and NGO expertise, someone who had experience in times of crisis and the organizational and intellectual acumen to translate a passion for national and humanitarian service into empathy and action on the ground.

In Susan Holowesko Larson, the country found the leader it needed. The Bangladeshi Nobel Prize Winner, Muhammad Yunus, an economist and banker, who founded the Grameen Bank, and who helped pioneer microfinance and microcredit notes:

“Human creativity is unlimited. It is the capacity of humans to make things happen which didn’t happen before. Creativity provides the key to solving our social and economic problems.”

Through her decades of work in business, civil society and community service, Susan Holowesko Larson has become one of the country’s most creative, passionate and capable social entrepreneurs, blending private, public and personal enterprise into a resume of hope and help for those in need.

She has helped “to make things happen” in The Bahamas “which didn’t happen before!”

There are many shallow talkers in the country but considerably fewer doers. Months before COVID-19 began to take its devastating toll, Mrs. Holowesko Larson sprang into action with others after the onslaught of Hurricane Dorian.

She co-founded Bahamas Strong in response to the worst natural disaster in Bahamian history. Its founding directors of record also include: Happy Hall and Karla Wells Lisgaris.

The initiative, formally constituted in 2020, helped to spearhead the private sector’s response to Dorian and assisted with the initial coordination of the response by international NGOs.

Mrs. Holowesko Larson was among those who helped to staff the evacuation centre at Odyssey Aviation which welcomed more than 6,800 displaced individuals arriving by sea and air from Abaco and Grand Bahama.

“A disaster relief logistics centre; a fully-supported and equipped sea rescue team, comprised of over 30 private boats, many of which transitioned from Nassau to North Eleuthera and carried out sea evacuations from Marsh Harbour and the Abaco Cays; and a medical centre, fully stocked by the National Drug Plan and able to provide prescription drugs for 60-90 days to evacuees arriving at the evacuation centre.”

“Working to create and maintain a national disaster resilience strategy and provide a national blueprint to identify and address vulnerabilities … and building a national repository of information which informs the general public, increases awareness of the merits of building resilience, and promotes participation.”

Community service and patriotism are in Mrs. Holowesko Larson’s blood. For 25 years she worked with the Bahamas National Trust (BNT), joining as its Education Officer, eventually serving as Director of Education and then Deputy Director.

Her meticulous and detailed approach to programme conceptualization and strategic planning were honed at the Trust, where she was a lead agent in crafting and implementing its first five-year strategic plan.

She also honed her skills in policy development and working with government agencies in the growth and management of the National Park System.

Collaboration and compassion are key to her vocation as a social entrepreneur.

It is the quality of mercy, compassion and collaboration seen in her commitment to Ride for Hope, of which she is a Co-Founder along with her brother, Stephen. Through the Ride, she has helped to spur greater volunteerism, philanthropy and community service, appreciating the cycle and wheel of giving and generosity.

She observed: “I think everybody knows that when someone is diagnosed with cancer that diagnosis comes with a lot of fear and a lot of anxiety. The Ride for Hope does not think that it should also come with financial ruin to families.”

And: “Cancer treatments are so expensive and there are so many Bahamians who are fighting cancer and really struggling to pay for their medicine. This treatment assistance fund was put together exclusively to help these Bahamians in need.”

The Ride is a cycling and running event. A hundred percent of the funds raised go directly into programmes, with approximately $3.5 million raised to date.

The programmes include a Family Island Mammogram Screening (FIMS) programme and the Treatment Assistance Fund. Through the Fund “direct cash contributions are made for chemotherapy and/or radiation for Bahamians who are fighting cancer but do not have the means to pay for their treatment.”

Social entrepreneurs like Mrs. Holowesko Larson mobilize the power and joy of volunteers, the latent civic energy and goodness in people, and the desire by many to move beyond apathy and cynicism to cultivate the hero within.

With enthusiasm she notes:

“I would be remiss if I didn’t call deserving attention to the thousands of hours of work by dedicated volunteers associated with these NGOs. Their contributions, especially during the height of 2020’s need, were truly invaluable and should be widely acknowledged. …

“While the term hero is often overused, the Task Force’s zone leaders truly earned that accolade as their efforts were nothing short of heroic. …

“The zone leaders’ dedication to helping the most vulnerable among us day in and day out often meant the needs of people they did not know took daily precedence over their own families and loved ones — sometimes, over their own health and wellness.

“That dedication continued for 70 weeks, over holidays, throughout lockdowns, in the face of great uncertainty, and around the clock.”

And Mrs. Holowesko Larson is quick to tout the virtues of partnerships and networks in the promotion of what we might achieve together beyond our narrow selves and mindsets:

“In scope and scale, the Task Force is the largest Bahamian public private partnership ever crafted. It has elevated awareness of what can be achieved when the government embraces the private sector as a willing and able partner, and, in return, the private sector contributes its experience and know-how for the greater good.

“It has cemented the role such partnerships should play in national development as our country moves forward.”

Even amid the social unrest and riots globally and as others went hungry throughout the world during the pandemic, Bahamians had sustained access to nutritious food because of the unprecedented partnership between the government, food programmes, churches, the private sector and volunteers.

Mrs. Holowesko Larson says it best: “My work with the Task Force’s NGO zone leaders filled me with hope.

“In an unprecedented time, they designed the largest-scale humanitarian aid programme our country has known and implemented it, not flawlessly but certainly with distinction.”

While no programme is flawless, the work of the Task Force was done with tremendous competence and integrity. They provided another form of sustenance for which our nation is hungry amidst “great cynicism, political silliness, and wide-spread negativity.”

It is defined as: “fresh hope; a recovery from despair.”

When we are tempted to despair we might remember the stellar example of hope and goodness and kindness and participation – and respair – by the food programmes, courageously led by Mrs. Holowesko Larson, who did not allow the naysayers and negativity to distract from her mission.

As the social entrepreneur Yunus reminds: “Creativity provides the key to solving our social and economic problems.” How might we use the example of the Task Force to respond to hunger and other national problems and to impart greater respair?

In gratitude for their work over the past two years, this year’s Person of the Year includes those who constituted and served as an army of hope and generosity: the Bahamas Feeding Network, the Grand Bahama Food Assistance Committee, Hands for Hunger, IDEA Relief, Lend a Hand Bahamas, One Eleuthera Foundation, the Bahamas Red Cross, scores of volunteers and Mrs. Susan Holowesko Larson, a social entrepreneur who helped to lift our vision and to inspire our imagination of what is possible.