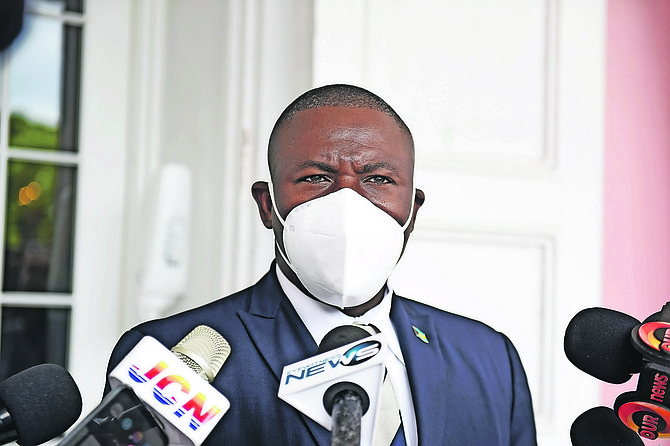 HEALTH Minister Renward Wells says while his ministry considers all recommendations made by medical experts to help strengthen the country’s fight against the COVID-19, it will only follow those that are “salient” and “valuable”.

He was responding to questions from The Tribune yesterday concerning former Health Minister Dr Duane Sands’ recommendations that the government adjust its response to the COVID-19 pandemic.

Dr Sands has suggested the government move away from RT-PCR tests as the gold standard to detect COVID-19 infection and instead embrace “newer technology”.

While voicing his opposition to the extension of the country’s state of emergency and emergency order protocols last month, the Elizabeth Estates MP recommended the government utilise RT-LAMP testing, which he says is cheaper to operate.

He also said it makes no sense to require PCR tests for domestic travel and further suggested the Minnis administration remove the barrier on surgical mask imports for the public.

He added there should be a government mandate requiring two-layer cloth masks to be worn instead of one to reduce spread of the virus.

Asked to respond to Dr Sands’ recommendations yesterday, Mr Wells said his ministry will look at the suggestions as it does for everyone else.

This is not the first time the former health minister has made recommendations to the Minnis led administration.

In December, Dr Sands said The Bahamas should conduct its own independent investigations into new COVID vaccines before widely distributing them to the public.

However, Mr Wells dismissed the recommendation, stressing that whichever COVID-19 vaccine the government chooses to implement will be a safe and effective one.

The country is expected to receive up to 100,000 doses of the Oxford AstraZeneca vaccine beginning the second half of this month through the second quarter of 2021.

Meanwhile, as it relates to the possible use of RT-LAMP tests in The Bahamas, Mr Wells told The Tribune last month that the government will not make a move on approving any form of additional COVID-19 testing unless first receiving the nod from the World Health Organisation.

Oxford University’s RT-LAMP Technology and CommonPass COVID eApp, which has quick test results loaded to a person’s cell phone within minutes of taking, is becoming more popular for use in airports and airlines around the world.

This test was presented to the government for approval to be used in Bahamian airports, however, it has not been given the green light, The Tribune reported previously.

“In general, the government of The Bahamas doesn’t move forward with any form of testing technology, kits or platform that has not been approved by the World Health Organisation (WHO). The Ministry of Health is a very conservative body and the Bahamian people need to understand that,” Mr Wells had said previously.

The best investment to make right now is to vaccinate 100 % of the population immediately. Borrow the money if necessary. With proper planning this can be completed in one month. Then our country may get back to 'normal' as long as we are mindful of our borders.

Why would we need to be "mindful" of our borders if we are all vaccinated? I keep hearing statements here and there that after being vaccinated even for a few months a person is still not immune to this disease. This seems to be the first vaccine in history that actually does not vaccinate people.
You would also be taking a serious risk with an unproven and untested vaccine/s. There has not been enough time to study these. It would be similar to following President Trump's sort-of suggestion to inject bleach into our veins - right?

If was left to the call this member of the crown - em's would soon have Comrade Jesus, peddling around and about the colony out islands on a bicycle.
Shakehead a quick once for Upyeahvote - you just couldn't wrote such salient and valuable bullshi# be any more committed right under the nose Her Majesty, Twice for not.

Dr. Sands added there should be a government mandate requiring two-layer cloth masks to be worn instead of one to reduce spread of the virus.

Sands should know better. Not even Minnis is stupid enough to make such a silly recommendation. Dr. Fauci quickly backed away from the idea of wearing two-layer cloth masks very shortly after he first suggested it a week or so ago. Epidemiologists worldwide were only too quick to point out that wearing two cloth masks or two layered cloth masks could pose even more serious health risks for the wearer.

Well that's your problem right there... you're assuming that Sands is actually reading the latest news and updates.

My Comrades, you're further endangerin' the health and welfare thousands more we colony's PopoulacesOrdinary (POAL), by you're misrepresentin' and makin' much out Dr. Fauci's,much earlier into the killer virus unknowns.

“salient” and “valuable” Patrick would not know what is salient and valuable if it came out and kick him in the face! ...Bahamians and Medical Professionals should be allowed to make their own scientific assessment of what vaccination is best and safe to entre their bodies and not following political patriotism' which could put the lives of Bahamians at (a known) and unnecessary risk.

no they wont. These guys become very arrogant when they take office. Jeff Lloyd was once a man of the people and he demanded the PM give answers because he reported to us!

Of important note for any of the high schoolers looking at pursuing to contest as a political party's future candidate, it can be important for future studies to include language fluency which will be a plus on your resume and job application for some cushy political appointment by a prime minister.
Comrade Reward, walked away from Oral Roberts University (ORU), with a 5-level Bilingual Proficiency fluency in bullshi#.

This country will mark one year since it has been battling the Corona pandemic in a few short weeks (3 or 4). It will also make one year since children have been to school in a face to face environment and a year since many senior citizens have ventured out of their homes, it only to church. And in a few weeks/months after that, the country will be preparing to graduate another generation of students on various levels, who, once again may have to have their ceremonies virtually. Some may not even have met any of their classmates face to face. So whenever schools reopen whether it’s after the Easter break or summer recess, hopefully government will put additional resources in place for returning students and even staff.

And within a year of the graduating classes of 2021, the Bahamian people will be going to the polls (May 2022) to give this government their grades. How well will the FNM fare in this process? Will the Bahamian people be kind and generous or will they kick them out?

Are you kidding?! The writing is on the wall for a snap election to be called anytime soon. Way too many things that are politically most harmful to Minnis are starting to unravel all too quickly, and rightfully so.

Tribanon is correct. Slovakia has just approved Ivermectin to fight Covid-19 in the early and late stages (all stages). It has been working for the past year in early stages and preventing even hospitalization. You would not know this by only following USA hysteria (otherwise known as news). Within 60 days there will be ZERO Covid in Slovakia and the rest of the world will follow (except for USA and UK who will deliberately continue on course due to financial benefits of hospital bills). Knowing this, I'm sure the government will use Speaker Moultrie's move as an excuse to call an early election during which they can follow the most recent American model of keep observers 50 feet away from the ballot counts (YES FIFTY FEET was what they did in Philly and Phoenix and Atlanta and others). It works wonders for the ruling party of a country to have observers who cannot observe. We will see how it goes.

Slovakia has approved Ivermectin for early mid and late stage use for Covid. We will see that either they will have zero Covid by end of March or they will be invaded by Russia in order to put an end to it. Or their medical plants may mysteriously catch on fire like several have around the world so far.

I would suggest everyone do a news check on Slovakia once per week to see how it is going over there.