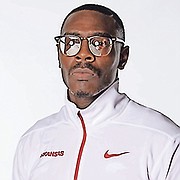 A Bahamas national indoor record for Laquan Nairn, a school record by Charisma Taylor and victories by Steven Gardiner, Jyles Etienne, Sasha Wells and Denisha Cartwright highlighted a series of weekend performances by Bahamian athletes around the United States.

University of Arkansas’ long/triple jumper LaQuan Nairn, who will only be competing in the outdoor season for the Razorbacks in his senior year, contested the men’s long jump at the American Track League #3 in Fayetteville yesterday.

The 24-year-old erased Leevan ‘Superman’ Sands’ national indoor record of 26-feet, 7-inches or 8.10 metres that he established on February 24, 2004 in Lexington, Kentucky.

“I was very pleased. I thank God. His grace is sufficient all the time,” Nairn told The Tribune after the performance. “I felt good. This was my first track meet for the year long jumping. So I’m very thankful the way it turned out.

“Obviously I could jump further and I will in time with more competition and reps.

“I didn’t know I actually got the national record until my coach came and told me. After he did, I was very happy about the performance.”

Reigning World Championship men’s 400 meter champion Steven Gardiner opened the 2021 campaign where he left off in the abbreviated coronavirus plagued 2020 season on the right track at the East Coast Invitational in Virginia Beach on Friday.

While it was unusual to see the lanky 6-feet, 3-inches Abaco native compete indoors, Gardiner, representing Empire Athletics, breezed through the men’s 200m in 20.71 seconds at the Virginia Beach Sports Center, which was off the Bahamas national record of 20.50 that Grand Bahamian Demetrius Pinder established on February 3, 2012 at the New Mexico Classic in Albuquerque.

“It was a great race. It was my first time doing a 200m indoors,” Gardiner said. “Coach (Gary Evans) and I talked it over before going to Virginia Beach.

“I also did a few practice runs when we arrived. So overall, it was a great run and I’m thankful for a successful and healthy race. I will now go back to training until the outdoor season.”

Joseph Manu out of Coppin State, was a distant second in 21.24.

In a home meet at the Gladstein Fieldhouse at Indiana University in Bloomington, Indiana on Saturday, senior Jyles Etienne soared to victory in the men’s high jump with his leap of 6-9 3/4 (2.08m). Etienne’s team-mate Grayson Rolen got second with 6-8 1/4 (2.04m).

Two Bahamians went head-to-head in the men’s 60m as Purdue University’s unattached Samson Colebrooke (competing in his senior year that he didn’t get last year because of the coronavirus pandemic) got the better of the clash with Ohio State’s freshman Adrian Curry.

Colebrooke, who has already qualified for the postponed 2020 Olympic Games, raced to a second place in the final in 6.73. Curry had to settle for eighth place in 6.94. Rikkoi Brathwaite of Indiana University was the winner in 6.63.

In the preliminaries, Colebrooke advanced with the third fastest time of 6.74 as Brathwaite and Waseem Williams of Purdue University were tied for the fastest times of 6.70. Curry got fourth in his heat in 6.95 for the seventh best time.

Colebrooke and Curry also contested the 200m, albeit in different heats. After he got second in his heat in 21.44, Colebrooke placed second overall behind Tyler Johnson of Ohio State, who won the heat in the fastest time of 21.07. Curry was second as well in his heat in 22.00 for fifth.

Devine Parker, competing for Ohio State, was eighth in the women’s 60m in 7.93. The Grand Bahamian, who attended St Anne’s School, had the second fastest qualifying time of 7.56 in winning her heat.

Vinajah Adderley, also of :Purdue University, was entered in the women’s triple jump, but she fouled out of the competition.

At the Heskett Center at Wichita State, Sasha Wells, in her senior year at Oral Roberts University, clocked 8.21 to snatch the women’s 60m hurdles, well ahead of her nearest rival, Claudia Rojo, who competed unattached for Wichita State in 8.75. Wells had the fastest qualifying time of 8.30,.

Taylor’s PR/WSU record in the hurdles

At the Arkansas Qualifier in Fayetteville, Arkansas, Taylor, now in her sophomore year on the Cougars’ track team, had the fastest qualifying time in a personal best of 8.19 in the women’s 60m hurdles for a WSU’s school record.

She came back in the final and had to settle for second in 8.24, the same identical time done by third place finisher Yoveinny Mota, a junior at Arkansas. Daszay Freeman, a sophomore at Arkansas, was the winner in 8.20.

Bahamian Ivanique Kemp, a graduate of Arkansas, still holds the meet record of 8.13 that she posted in 2012.

Competing like she did when she attended Queen’s College in the Bahamas Association of Athletic Associations (BAISS) Championships, Taylor didn’t have much rest as she went right to the pit and cleared 43-feet 7 3/4 or 13.30m for second place in the triple jump.

“There were a lot of technical things that I could’ve done better throughout the race but it was a good start. Fast forward to the final I had a great start and was set up to run a lot faster than the heat but I ran too close to hurdle three and hit it with my lead leg, again technical things I need to work on.”

As for the triple jump, Taylor said right after the hurdle final. she had to jump, which affected her a bit in her performance for her repeat second place feat.

“My rhythm got a little bit messed up from running the hurdles but I jumped 13.30m which is my best season opener for the triple jump,” she summed up.

Despite the pair of second place finishers, head coach Wayne Phipps was quite pleased.

“Charisma Taylor led the way, finishing second in the hurdles (although she ran the fastest time in the meet in the prelims) and in the triple jump both with nationally ranked marks,” Phipps stated.

Taylor and the Cougars will compete in the University of Washington’s Invitational this weekend and then they will travel to Lubbock, Texas for the Matador Qualifier on February 19.

“I’m looking forward to posting some high marks in both the triple jump and hurdles with God’s help,” proclaimed Taylor, as she prepares for the NCAA Indoor Championships, scheduled for March 11-13 in Fayetteville, Arkansas.

For quarter-miler Megan Moss, her heat at the South Carolina Invitational at the University of South Carolina was a breeze as she led from start to finish to post an impressive winning time of 52.99 for a season’s best.

Competing in her second two-lap race indoors this year, Moss had to settle for second place overall as she wasn’t as fast as Talitha Diggs of Florida, who took heat one in the overall best time of 52.34.

Moss, a graduate of St Augustine’s College, also ran the opening leg of the 4 x 400m relay team of Abby Steiner, Masai Russell and Dajour Miles, who captured first place in a time of 3:32.41.

They won over the University of Florida, anchored by Donesha Anderson, as the Gators got second place finish in 3:35.91. Anderson’s team-mates were Taylor Manson, Talitha Diggs and Sterling Lester.

Jaida Knowles, a freshman also out of St Augustine’s College, made her debut for the Wildcats, but was unable to complete her 200m race. Knowles is coming off a slight hamstring injury.

At the Ted Nelson Dual, hosted by Minnesota State at the Myers Fieldhouse in Mankato, Minnesota, Denisha Cartwright, a sophomore at Minnesota State, captured the women’s 60m hurdles in 8.62, well ahead of second place finisher Northern Iowa senior Megan Hudson, who did 9.03.

Cartwright also showed her versatility by clocking 24.78 for her triumph in the 200m. The race also featured Tyler Gray, a sophomore at Northern Iowa, who won her heat in 25.42, but had to settle for fifth place overall.

The two Bahamians also competed in the 60m final as Cartwright got second in 7.61 with Gray sixth in 8.06. Ja’Cey Simmons, a sophomore at Minnesota State, won in 7.59.

Cartwright had the fastest qualifying time of 7.66, matched by Simmons for second, while Gray was third in the same heat with Cartwright in 8.03 for the seventh best time.