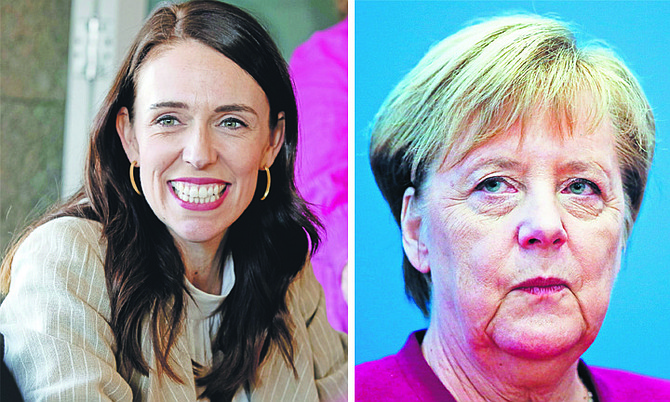 THE LEADERS of New Zealand and Germany, Jacinda Ardern and Angela Merkel.

International Women’s Day is less than a month away and the Commission on the Status of Women at the United Nations follows closely behind. The themes for these events focus on women’s leadership. UN Women noted that “in addition to persistent pre-existing social and systemic barriers to women’s participation and leadership, new barriers have emerged with the COVID-19 pandemic” and juxtaposed this with the fact that women have been on the frontlines of the COVID-19 crisis serving in many capacities.

It has been said, over and over again, that countries led by women — including New Zealand and Germany — have had stronger, more effective responses to COVID-19. Women’s leadership and participation in decision-making are critical.

Last week, a series of meetings were held with CARICOM ministers and civil society members in preparation for the 65th Commission on the Status of Women. Agreed conclusions are the result of this annual UN convening. For example, the 2019 theme was “Social protection systems, access to public services and sustainable infrastructure for gender equality and the empowerment of women and girls.” Agreed conclusions included reaffirmation to commitments made in the ratification and adoption of mechanisms such as the Convention on the Elimination of All forms of Discrimination Against Women (CEDAW), condemnation of all forms of violence against women and girls, recognition of the importance of improving public services and infrastructure to enhance the safety of women and girls, and recognition of the relationship between universal access to social protection and reduction of inequality through the eradication of poverty.

The CARICOM statement has not yet been adopted by Member States. Many hours of work have gone into the drafting and revision of the statement which is aligned with this year’s theme - “Women’s full and effective participation and decision-making in public life, as well as the elimination of violence, for achieving gender equality and the empowerment of all women and girls.”

We, in the Caribbean, have had many conversations about political quotas over the years. Guyana remains only country in the region with a quota and 36 percent of parliamentarians are women. In The Bahamas, 13 percent of parliamentarians are women. In addition to being a clear statement on the state of The Bahamas with regard to gender equality and women’s political participation broadly, it is also an indictment on the Free National Movement which won 35 of 39 seats. If the party had committed to and followed through with a 30 percent quota, it would have been the first administration to achieve this (already low) goal.

It appears we are heading into the next general election poised to, yet again, fail to come close to gender parity in parliament.

Two weeks ago, the Progressive Liberal Party announced the ratification of 18 candidates, Leslia Miller-Brice and Jobeth Coleby-Davis the only women among them. The Free National Movement announced the ratification of 17 candidates, including 11 incumbents, Senator Jennifer Isaacs-Dotson, Felicia Knowles and Miriam Emmanuel the only women among them. This week, it announced eight more incumbents including Pakesia Parker-Edgecombe.

The Progressive Liberal Party, then, has 11 percent representation of women and the Free National Movement has 16 percent. Both parties have a long way to go, and they certainly need to ensure candidates are fit for leadership with gender competencies, not just checking boxes on the surface.

The Progressive Liberal Party, in its announcement, mentioned the “mandatory training module” its candidates participated in. It included Bahamian history, party history and parliamentary procedures. There was no mention of more practical training on, for example, engaging constituents, assessing needs, understanding international mechanisms, or human rights.

All political parties should include mandatory training for prospective candidates that directly relate to the work they will do as Members of Parliament and may be appointed to do as cabinet ministers. Political parties should also demonstrate their commitment to gender equality by instituting a political quota, not of only 30 percent, but of 50 percent which is more proportionate to the population. The issue of political quotas will likely be referenced in both the CARICOM statement and the agreed conclusion of the Commission on the Status of Women next month.

There are rumours of an early election, but there is no telling when it will be called, especially with a Prime Minister who clearly relishes his ability to confuse and surprise the country. We do know, however, that a general election looms ahead and the options before us are subpar.

The current administration has shown little interest in fulfilling its 2017 campaign promises. The talk about transparency and accountability was, obviously, just talk. Everyone is speculating about the election date when the seventh page of the Free National Movement’s Manifesto claimed the administration would “amend Regulations to the Constitution to establish an independent Boundaries Commission and a fixed date for General Elections”. It also promised fixed terms for Prime Minister, a recall system for non-performing Members of Parliament, and establishment of an ombudsman office among many other actions left undone.

Unfortunately the Progressive Liberal Party has proven to be as lazy an opposition as the Free National Movement was from 2012 to 2017. What now?

The Free National Movement will tell us it needs another five years to complete its work. It will blame Hurricane Dorian and the COVID-19 pandemic for its failure, ignoring that this is the job it signed up for, crises and all, and that its performance was just as abysmal before those two events. The Progressive Liberal Party will consistently tell us that it is not the other party and point out all of the foibles and failures we already know about.

We need to demand more. Promises are not enough. In fact, they are nothing. We need evidence of their values and commitments, and they need to have been evident before election season. We need to see their commitment to youth and women demonstrated in the composition and behaviour of their slates. We need to see their familiarity of candidates with their constituencies, understanding of issues impacting constituents, human rights competencies, and their priorities as part of a potential team of legislators.

We have seen, in the aftermath of Dorian and during the COVID pandemic - and in the themes and content of international meetings and events - that women’s political leadership and participation in decision-making is critical to the development of countries, regions and the world. Gender equality (Goal 5) has, since the adoption of the 17 Sustainable Development Goals, been recognized as central to all of the goals and critical for their achievement.

The focus on women’s leadership and decision-making at this year’s Commission on the Status of Women is important, relevant and instructive. We need to pay attention to the candidates being announced and the communities — not just physical constituencies — and ideologies they represent. The majority of remaining candidates ought to be women. If they are not, we know the party leaders and the people pulling the strings are not paying attention, are incapable of or unwilling to recruit and train more diverse candidates, and lack commitment to equality and sustainable development.

The CARICOM statement focused on the theme of “Women’s full and effective participation and decision-making in public life, as well as the elimination of violence, for achieving gender equality and the empowerment of all women and girls” will be adopted in the coming days. It will help to shape contributions by Member States in the Latin America and Caribbean preparatory meeting, and that will influence the agreed conclusions at the end of the 65 session of the Commission on the Status of Women. The Bahamas will be a part of the process and will make its commitments there.

Political parties need to be mindful of this and ensure that their practices are in alignment with what they promise. In fact, taking a position, with action, on this issue of gender parity in parliament as a political party would demonstrate a serious commitment, challenge other parties to do the same, and may transfer to the next administration. Now is a good time to show women voters, all voters, and the world that learning has occurred and is resulting in transformation.

For voters, it is important to remember that no administration will have what the political parties and candidates do not have. We have to pay attention to the people named as candidates, why they have been chosen, and what they claim to bring to the party and, possibly, the next administration. We do not choose them ourselves and we are not privy to the favours that may be incurred or repaid by their ratifications, so we have to question, assess, and challenge. We have to demand answers to our own questions, and not the ones they design for us in their ads and other promotional material. In this moment, we need to demand the names of the remaining candidates, debates and other opportunities to hear directly from them, and proper representation including, of course, gender parity.