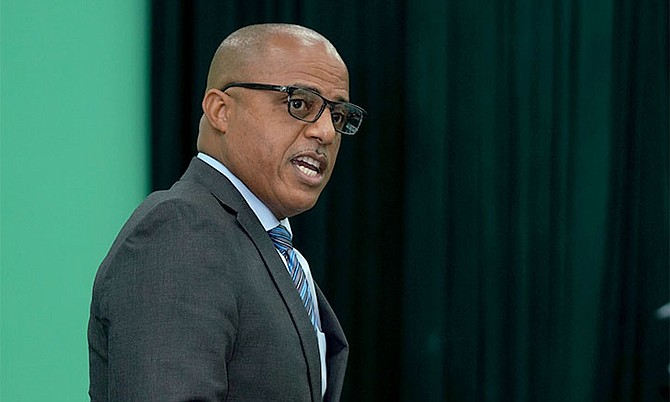 VOTERS who have relocated after being displaced by Hurricane Dorian will have to register to vote in their new constituency, National Security Minister Marvin Dames suggested yesterday.

Last week, House Speaker Halson Moultrie told reporters that members of the Constituencies Commission were still deciding how they will accommodate voters in Abaco and Grand Bahama displaced by Hurricane Dorian.

The commission chair said he believed that recommendations should be made on the matter, possibly allowing these displaced people to choose to vote in the area they lived in before the storm.

When asked about the issue yesterday, Mr Dames maintained that the law is the law, suggesting that storm victims who have moved to another area for more than six months will still need to make constituency transfers.

“Listen, again the law is pretty clear on that now and we can’t circumvent the law,” said Mr Dames.

“We would have spoken to that, I think, a few weeks ago but the law is really clear on persons who would have been out of their jurisdiction for, I believe it’s like six months, and how they ought to be treated. So, if and until the law is changed then we have to abide by the law.

“I’m not going to speak to that any further but right now, there are laws on the books as to how anyone being out of their constituencies for a specified period, how they ought and what they’re entitled to do and supposed to do.

“I can’t begin this process of speculating and making assumptions and misleading persons. Right now, we have laws that govern how we ought to conduct ourselves and we all have to comply with the law. That’s why we create laws.”

People who registered for the 2017 general election and who have not relocated for a period of 90 days or more shall remain registered as a voter on the continuous register unless their name has been removed from the register by the parliamentary commissioner, according to acting Parliamentary Commissioner Lavado Duncanson.

However, qualified Bahamians who are not on the 2017 register or who have moved to an address different from the one on their purple voter’s card will need to visit a Parliamentary Registration Department centre to register or transfer their registration to a new polling division or constituency where they now reside.

Mr Dames said while the process to register first time voters is going smoothly, officials still have to work out several “kinks”.

“I mean we’re rolling it out and obviously when you’re beginning to roll it out for a new cycle you’re going to have a little minor issues, (but) no major issues,” he said. “I got an update from the (acting) parliamentary commissioner yesterday (Monday) and things are going pretty well. They have to certainly work out some kinks here and there but what is good is that I think what you’re going to see is a greater level of efficiency this time around.”

Mr Dames attributed officials’ success so far as one of the benefits of having a permanent register.

He maintained that compared to previous years where voter registration numbers totalled over 100,000 people, this year the numbers will be much less as a result of the newly passed Parliamentary Elections (Amendment) Act.

The legislation allows for a permanent voter register to be established for the first time in the country, meaning people who registered to vote for the 2017 election will not need to register again.

Some 20,000 first time voters are expected to register this election cycle.

Mr Dames told reporters: “We’re looking at probably registering between now and the next general election between 20,000 and 25,000 voters. That’s nothing compared to the hundred and eighty plus thousand and so this should be smooth sailing.

“But what I’m hearing from the parliamentary commissioner is that things are flowing and people are coming in but again as I’ve said before that in this cycle—now and the next general election—you’re looking at 20,000 and 25,000 voters.

“So, we shouldn’t be faced with that onslaught of all of the issues around trying to register 180,000 plus persons and this is why we’re pleased with the direction in which we’re heading and there are a lot more changes certainly in the pipeline and we would’ve looked at the amendments to the Act and so in time we hope to reach a point where our system is totally modernised and that’s the objective.”

Minnis will be calling a snap national general election by the end of May at the very latest.

Why does everybody think minnis will ring the bell early? He must know he doesn't stand a chance, you'd think he'd want to wait til the last possible second...