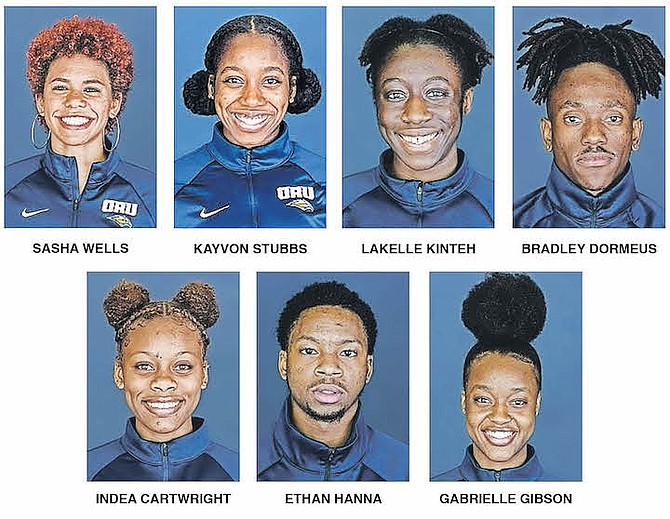 For the past few years, head coach Joe Dial said he has been pleased with the improved performances of the Bahamian connection of Golden Eagles athletes at Oral Roberts University.

Their latest performance came at the 2021 Washburn D1/JUCO Challenge where Sasha Wells and Bradley Dormeus both broke facility records at the Washburn Indoor Athletic Facility.

Wells eventually cleaned up the competition as she snatched three individual event titles, adding the 60m in 7.51 and the 200m in 24.56 to her triumph in her speciality in the hurdles.

Dormeus, now in his junior year, pulled off a double feat as he crossed the finish line in the 400m in 48.27 just ahead of his team-mate Cameron Neely, who did 48.62 for second.

Dial said he has been extremely impressed with the Bahamian athletes, especially Wells, the Golden Eagles’ team leader. “Sasha is in her 4th year at ORU. With each year, she has continuously improved in her event times and has been a tremendous leader for our women’s team,” Dial said.

“Having ran a lifetime best this indoor season in both the 60m and the 60m hurdles, she is really being set up perfectly to have a tremendous outdoor season to place in the NCAA Championships and represent the Bahamas in the upcoming Olympic Games.”

Wells, aiming for a spot on the Bahamas team heading to Tokyo, Japan for the Olympics in July, is Oral Roberts’ record holder in both the indoor 60m hurdles and outdoors 100m hurdles.

Dial said Dormeus is also proving that he can be another Bahamian Olympic hopeful in the men’s 400m and or on the men’s 4 x 400m relay team.

“Bradley has made significant improvements in his top end speed and strength,” he said. “He is also setting himself up for a great outdoor season and will be a strong contender for the Bahamas Olympic team.”

In addition to those two, Dial said Gibson, Lakelle Kinteh, sophomore sprinter/hurdler Indea Cartwright and Ethan Hanna have all been holding their own in their respective events. “Gabrielle has made significant improvements on her speed and strength, which has resulted in her running lifetime bests in her events,” he stated. “Lakelle recently ran a 60m personal best and I’m very excited to see what the outdoor season holds for her this year.

“Indea is beginning to create a strong foundation in her work habits which has resulted in a great performance last weekend. She has a great future ahead. Ethan is just now rounding into great shape and getting tremendous experience running an indoor 400m and is a valuable leg on our 4x4 relay.”

Hanna was fifth in the men’s 400m in 49.89. He also ran the third leg and passed the baton on to Dormeus on anchor as they led the other two members, Aaron Charlton (lead off) and Daniels Bambals (second leg) to victory for Oral Roberts in 3:17.37.

Kayvon Stubbs, another senior, didn’t compete but Dial said he has high expectations for her as well.

The Golden Eagles are scheduled to be back in action at the Summit League Indoor Championships in Brookings, South Dakota, over the weekend of February 27-28.