Married To The Bishop

New book reveals challenges of being a church leader’s wife 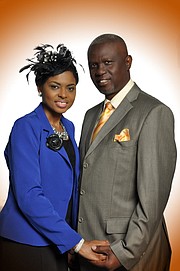 Eleanor Williams with her husband, Bishop Patterson Williams of the Church of Christ Apostolic.

Pastor’s wives ­– often misunderstood and misjudged; often viewed only like the extras in a movie who grace the scenery but do not play a major role. Some have lived without having their voices heard, and died with their purposes unfulfilled, never understanding that they, too, had a personal mission apart from their spouse. When facing personal trials, they struggle with the question of who to turn to with their burdens, all because of who they are – the wives of deacons, rectors, pastors or even bishops.

Instead of living in silence, existing merely in the background, Eleanor Williams, wife of Bishop Patterson Williams of the Church of Christ Apostolic, a non-denominational ministry in Grand Bahama, has stepped out into the spotlight with the release of her new book, “Diary of a Pastor’s Wife”. She shares in great detail the unique challenges one faces when married to a leader of a church.

Mrs Williams’s book was written in honour of her late mother, who passed away on August 30, 2012. Her mother, she explained, was her first “coach” and mentor as a pastor’s wife.

“I grew up in the Church of God of Prophecy. I was a pastor’s kid, and I received the Lord at an early age. I graduated from R M Bailey Senior High as well as the Bahamas Hotel Training College. I worked in the hospitality field for most of my adult life. I hold a Bachelor’s degree in Christian counselling,” she told Tribune Woman.

Mrs Williams said she knew the title of her book would capture the public’s interest at first glance. She hopes sharing her story will help someone who may be struggling with a similar role in life. 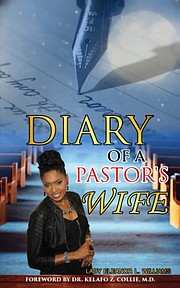 “For the past five years this diary has been in my womb. I was inspired by the many silent first ladies of the church. They do not know with whom to share their personal struggles and trials without being judged. Many died without fulfilling their purpose. Many of their voices were never heard. Some were misjudged and misunderstood by their husbands, his leadership team, and the congregation,” she said.

The book explores issues like the demands of ministry and family on a clergyman’s wife, personal issues a pastor’s wife can face, as well as conflict in ministry and relationship challenges in ministry.

Although she grew up as a pastor’s daughter, Mrs Williams said she only got a glimpse of what life was like being married to a clergyman. She did not see the full scope of what she would encounter later in life.

“As a pastor’s daughter, I watched my mother in ministry, but now I am no longer watching but walking in her shoes. I observed her from a distance as a pastor’s wife. She was seen but not heard much in leadership. Being a pastor’s wife now is totally different. You can never be fully prepared…I will describe it as this: You will get to your destiny safely, just be prepared for the turbulence on the journey.”

Marriage, regardless of the spouses’ occupations, always comes with a myriad of challenges. But a pastor’s wife faces very unique challenges that many may not be aware of.

“Being married to a pastor can be challenging at times because the flock is always on their heart. It can be difficult if husband and wife are at a lower spiritual location then the other or just not sociable. It is an extremely high calling from the Lord, yet a humbling posture at times because it calls for serving culturally different people,” she said.

Some of the difficulties Mrs Williams has faced have included being falsely judged and misunderstood; having people hold her to higher standards of her because of her position, and having her needs forgotten even after being there for others.

However, she has overcome them all and wants to help others to do the same.

“This diary is not just for pastors’ wives, but female and male pastors, co-pastors, church mothers, ministers, pastors’ aids, armour bearers, or just kingdom women in leadership. It is a manual or keepsake. It restores and rebuilds,” she said.

The book is currently available at Logos Bookstore in Harbour Bay and at The Bible Book & Gift Centre.