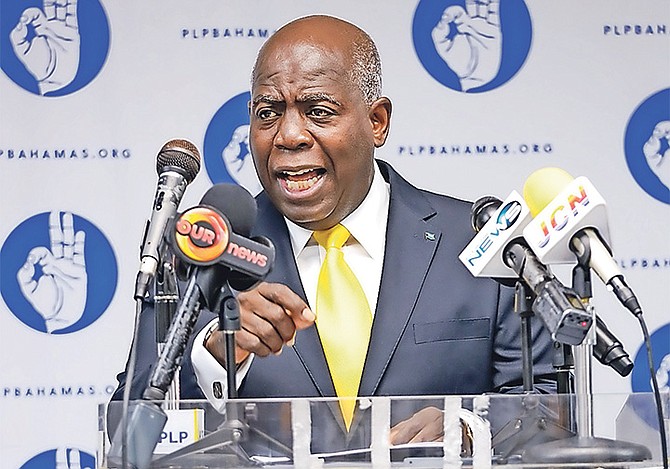 Mr Culmer hit back after Mr Davis accused the FNM of “dirty tricks” aimed at harming the PLP’s chances at the next election.

Mr Davis called a “major” press conference at which he said his party had tracked down 11 social media sites which he said were created by the FNM,

“The FNM doesn’t engage in those types of politics,” said Mr Culmer.

“I have refrained from those types of politics because I believe Bahamians are past that type of politics. The type of commentary we have compared with the PLP and Fred Mitchell is like night and day. I think Brave really was talking to Fred and telling him he should refrain from his brand from politics.”

When you have Bahama Press, the Gallery, Bahamas Against Corruption and other groups that come with distasteful things against the FNM, I can’t see how Brave or any PLP could say what he said. From day one these guys were on every media platform with the filthiest and most vile memes you could come up with. I’m disappointed and shocked that the leader of the opposition would fix his mouth to say such nonsense.”

Asked if he wants the anti-PLP ads to stop, Mr Culmer said: “The party don’t support that kind of thing.”

Earlier in the day Mr Davis told the media the FNM was funding “toxic, deceptive” political ads that have bombarded Bahamians on social media websites like Facebook.

“Anyone with a phone or an internet connection knows what I’m talking about,” he said.

“People are complaining to me every day now about the toxic, deceptive ads that seem to be unavoidable. Someone described it to me this way: ‘Mr Davis, the FNM is running a garbage juice campaign.’

“And that’s exactly right…I am not talking about ordinary politics. I can handle rough and tough politics. I have no problem with that. I am talking about how this FNM’s dirty political tactics are more deceitful and more dangerous than anything we’ve seen in our country’s modern history.”

Mr Davis noted that concerns about misinformation circulating on Facebook and similar platforms muddied the recent American presidential election while the social media behemoth faced congressional scrutiny for how it is addressing fake news.

“It is long past time for a public conversation in this country about the role that Facebook is playing in our democracy,” he said.

Mr Davis said his party has identified at least 11 fake Facebook pages that are running paid, anti-PLP ads while masquerading as being tied to the opposition party.

“These groups,” Mr Davis said, “are pretending to be independent organisations, falsely identifying themselves as ‘community sites’ or ‘news and media’ or even as a ‘PLP history museum’.

“They are no such thing. They are not real. They have no offices. They have no staff. They cannot be contacted. They do not produce or post or advertise content except for anti-PLP and occasionally some pro-FNM content.

“They pretend to be independent, but some are running the same exact ads and overlapping graphics and language, and many click through to the same websites.

“In some of these paid ads, sent out across the country, they have an image of duct tape across my wife’s mouth, and duct tape over the mouths of female PLP candidates. What is wrong with these people?

“They know if they put their name on that, it would hurt them, not help them. That’s why they don’t run these ads from the FNM page. It’s not just on Facebook, either.

“Their lies are everywhere, in banner ads when you visit your bank website, or play an online game, or watch a YouTube video. I’m not talking about the homemade graphics and memes that supporters of both parties make and circulate.

“I’m talking about expensive, coordinated, paid advertising bombardments in the millions of dollars.”

That is all they have to run on dirty tricks and lies. nothing else.

They did the same things in the last election remember the fellow who could not find 42 million. who can expect him to find 28?

they are reaping their rewards

The PLP stink of corruption, filth and lies. Support them at our country's peril. They thrive on ignorance and immature minds. If the devil ever created a political party then the PLP would be it. Evil, Evil, EVIL!!

@Sickened: You won't know what real nasty and wicked evilness is until Minnis bites you in your arse. LOL

Now many FNM has been brought before the courts and found guilty. and guess what they get PLP lawyers to represent them

The FNM fellows seem not to be able to speak the truth. they just can not do it.

The good thing about this upcoming election is the average Bahamian on the street or even home in curfew or lockdown is well aware of the issues and concerns of the country. They will not be sidetracked by the dirty politics that and campaigning by ‘dem racist people out West who are even attacking and sullying the names of persons who have not even expressed any interest in running in the upcoming Elections. Nygard is a nonissue and no more than this jred paper’s bag of yellow journalism and mad propaganda by dem people out west. No body in Bains and Grants Town knows the four girls who claim they were raped and are now living abroad, all expenses paid, compliments of you know who. No one except that preacher who also got funds. So if you exposing where one party got their money from, tell the Bahamian people, most already know where the other party getting theirs from. Can you see Russia from your back porch?

Much a serious matter to cause an official delegation of the colony's official opposition party be paying more than a pre-general election courtesy call on the colony's Chief Justice Comrade Sir Brian.

The word among the PLP insiders is the Vomit Christie will resume the leadership of the party for the next election. They say Davis has to go. He is not photogenic as well as in the pocket of Nygard. Just watch how it plays out. Trust me. Ask Tribanon.

I have no idea what you're talking about, but I do know some big money people in Lyford Cay, and I mean really big money, are quietly working behind the scenes to make sure Minnis's political career comes to end.

How quickly we "try" to sweep the Toggie and Bobo fiasco away. . . John can say whatever he wants to say. . .Nygaard and his "crew" are on tape implicating PLP top brass!!

It will be a "dosie" to bring Christie back since he is on those tapes too!! Davis want "dirty" politics to stop only when it is pointed at him. . .but keep it coming when its is pointed at someone else!!

Homeboy. . .when ya "gat" some big ghost them in ya closet. . .don't throw big political rocks at other peoples them closets!! Davis "fraid" that when them "things" come "tumberlin" outta he closet. . .POW!!

Don't "belee ma" just go on social media and shout "BAMSI" and the PLP them will call ya all kind of nasty players!! Mr. Davis has some "long bags on he back" . . .just the information that will come out will send him crazy!!

ZNS on-air announcers and newsreaders have been read the riot act, should any thems be caught to be referring to the man's as anything on-air, other than that of. The Most Honourable Mr. Mnnis.

Brave getting desperate... I hope for his sake Minnis dont beat him. I owuld mean egg in he face same as Perry had

The people them will not be voting for Minnis. . .THEY WILL BE VOTING AGAINST DAVIS!!!!

THAT KNOWLEDGE IS WIDE-SPREAD AMONG PLPS. . .they know that Mr. Davis is a "lame duck" going into an election. . .one just after the greatest election "cut hip" ever in this nation. . .one where Mr. Davis was the deputy leader!! More than being the 2nd leader. . .he always protected and defend PLP who were mixed-up in some "juicy" things. . .

What is this guy's appeal? Comes off like a weasel.

Call a press conference to sling allegations? Really? And the Tribune prints this garbage? This is not news.

...cause the PLP isn't? LOL. Thats why out of touch ppl need to sit down and some point, someone tell Mr Davis the Youtube Ads that his party pays to be played in between my videos, says paid for by the PLP at the end.

Sometimes I wonder where he grow-up. . .can't be around here? Or maybe he thinks we all fall of the turnip truck just this morning?? I have never seen the PLP grovel so low. Negative all the way. . .but the so many negative "start" making them look "jokey" and "weaselly". . . I done reined myself to another 5 years of FNM. . .unless the PLP do something about their "boorish" campaign work so far!!