Clinging To Life For 36 Hours 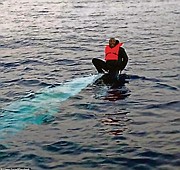 THE JAMAICAN man found clinging to the capsized boat.

A Jamaican national was rescued in the waters off Florida after 36 hours clinging to a boat that capsized as he tried to enter the US from The Bahamas, while six of his compatriots are missing and presumed dead.

Dailymail.com reported Captain Chase Cornell, a charter fishing skipper out of Fort Pierce, spotted the man on radar about 20 miles offshore and came to his rescue on Friday in his employer’s fishing boat, the Southern Eagle.

“I slowed down to take a closer look and found this guy clinging to his capsized boat,” Cornell wrote in a Facebook post.

“He had left Bimini with six others in attempt to make it across to the states when the boat capsized at 8pm Wednesday night.”

A Coast Guard Station Fort Pierce 45-foot response boat launched to the scene, received the survivor and transferred him to land and local emergency medical services Cornell and the fishing boat’s owner Peter Busch worked together to bring the man aboard +12

The rescued man, a Jamaican national whose identity has not been made public, was suffering from hypothermia and dehydration. Cornell and his friends wrapped him in warm blankets and contacted the Coast Guard.

The fishing boat’s owner Peter Busch, owner of Southern Eagle Distributing and chairman of the board at Busch Wildlife Sanctuary, was also on hand to lend assistance in the rescue.

It was unclear what happened to the man after he received medical care, or whether he was transferred into the custody of immigration authorities.

We now know who was physically the stronger of the seven of them.

Why are they risking their lives to go to the "racist" United States? Biden and the Democrats promise free citizenship and free money to illegals.