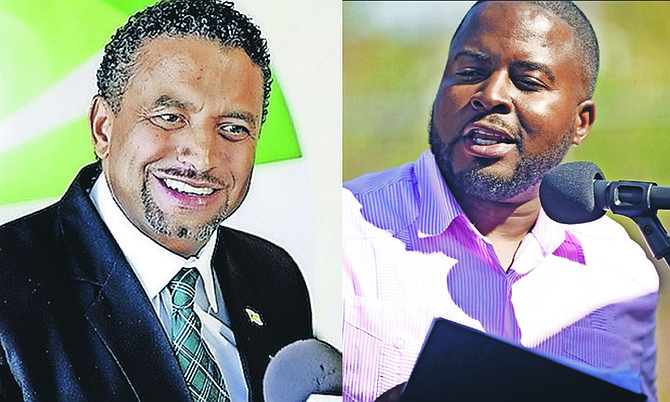 • Asks: ‘Why engage law firm you have lost faith in?’

The DNA’s former leader yesterday said the prime minister was “as quiet as a lamb” while slamming the “amazing” response to his law firm’s action against the Water & Sewerage Corporation.

Branville McCartney told Tribune Business that the reply by Adrian Gibson, the corporation’s executive chairman, to the lawsuit launched by Halsbury Chambers had only served to strengthen its case to be paid more than $40,000 in outstanding legal fees.

He argued that Mr Gibson, also the Long Island MP, had “not denied” that money was owing nor asking Halsbury Chambers to initiate legal action against a contractor he alleged had defamed his reputation in relation to Water & Sewerage contract awards.

Hitting back after the Water & Sewerage chief asserted that an “egregious mistake” was made in hiring Mr McCartney’s law firm to collect the corporation’s multi-million dollar aged receivables, the ex-Democratic National Alliance (DNA) leader said many of the issues complained about by Mr Gibson were standard Bahamian legal practice.

In particular, Mr McCartney dismissed Mr Gibson’s threat to lodge a formal complaint against Halsbury Chambers with the Bahamas Bar Association, adding that law firms typically withheld a client’s files and documents if they were delinquent in settling outstanding legal fees.

Disputing Mr Gibson’s account of the law firm’s meeting with senior Water & Sewerage Corporation executives in a bid to settle their dispute, Mr McCartney said his company had recovered more from one customer than the total $60,000 that the executive chairman asserted it had collected.

Mr Gibson did not respond to Tribune Business phone calls and messages seeking comment yesterday amid the escalating dispute with Mr McCartney and his firm, but the latter questioned why the executive chairman would request that Halsbury Chambers pursue a defamation claim on his behalf if he had “lost faith” in its ability as claimed.

Mr McCartney, a former Cabinet minister in the last Ingraham administration, said Mr Gibson was “trying to cover his tracks” and “talking a bunch of foolishness” through the statement issued in response to Halsbury Chambers’ legal action becoming public.

Branding the response “contradictory”, Mr McCartney told this newspaper: “He has not denied that he asked us to represent him in the defamation suit. If Halsbury Chambers was so bad, why would he ask us to represent him personally if we were so bad?”

That potential defamation action, according to Halsbury Chambers’ “statement of claim”, lies at the heart of its claim. It is alleging that Mr Gibson, in July 2019, requested that the law firm issue defamation proceedings on his behalf against Gregory Miller, Apex Underground and Utilities Company’s president, over criticisms the latter had made over Water & Sewerage Corporation contract awards.

While Halsbury Chambers served a “demand letter” on Mr Miller, calling on him to publicly apologise and retract the offending remarks, Mr McCartney said his law firm halted its involvement due to its belief that Mr Gibson - and not the Water & Sewerage Corporation or Bahamian taxpayers - should pay the required legal fees.

Reiterating that defamation lawsuits are “personal”, and that any damages awarded would go to Mr Gibson rather than the Corporation, he added: “He [Mr Gibson] wanted you, me and the public at large to pay his legal fees, and we wanted no part of it. Period.

“That got him upset, and he stopped us representing the Water & Sewerage Corporation any further, and stopped communicating with us.” Mr Gibson, though, blasted Mr McCartney and his law firm for “meshing” the disputed fees owed with the defamation action, adding that this “appears especially spiteful and political in nature”.

The executive chairman, who attached material seemingly confirming that he requested the ex-DNA leader and his firm to act for him on the defamation matter, also stuck to his position that the Corporation should have covered the legal bill as the offending comments and planned litigation involved him acting in “a public capacity” on its behalf.

Mr Gibson also sought to disparage the collections work that Halsbury Chambers performed on the Corporation’s behalf, denying that it ever came close to recovering the full $10m drop in its accounts receivables to $36m that he lauded towards the end of 2019.

“Our concise internal audits show that, notwithstanding in excess of 100 delinquent accounts being assigned to him/his firm, Mr McCartney and his firm collected roughly $60,000 whilst he/his firm in turn received a lot more compensation to the tune of nearly $200,000,” he added.

“Whilst assessing the firm’s performance, the Board and I – along with the general manager and relevant persons in the delinquent accounts section – considered that we were losing more monies in McCartney’s/Halsbury’s retention than we collected, and lost faith in... this firm relative to our thrust to effectively pursue our accounts receivables.”

Mr McCartney, though, yesterday argued that his company was the only law firm hired by the Water & Sewerage Corporation to pursue delinquent customers over the previous 11 months. “He’s the one that came out publicly and said the collection efforts were very good,” he added of Mr Gibson. “To come out now and say it was not OK, that’s foolish.

“We negotiated with some entities where we got on one settlement more than $60,000; just one matter. I find it amazing that you lose faith in a firm that you wanted to do your personal legal claim for defamation on your behalf. That’s contradictory. You lost faith in that law firm because I said we would not do the defamation case if the Water & Sewerage Corporation was going to pay for it.”

Arguing that the timing of the defamation move, and Halsbury Chambers’ loss of the Water & Sewerage Corporation’s work, supported this assertion, Mr McCartney also rejected Mr Gibson’s assertions that “our corporate files are being held hostage” by his law firm’s failure to return them.

Suggesting that Mr Gibson, as an attorney, should know better, the ex-DNA leader said: “It is the practice in the legal profession that if you have outstanding fees you can keep all the client’s files until they are satisfied. Otherwise you have a lien over those files. All other firms carry out that practice.”

Mr McCartney said these terms were spelled out in Halsbury Chambers’ “engagement letter” that was signed by Mr Gibson, and he also rejected the latter’s assertion that the law firm was still purporting to act for the Water & Sewerage Corporation despite being told to stop given that its contract was over.

“This is the standard practice, and the courteous thing to do. No fees are attached to that. The fees outstanding are from matters prior to being told to stop representing them. The $40,000-plus are fees due from 2019 prior to us being told not to represent the Water & Sewerage Corporation any further.”

Mr McCartney also gave a different interpretation to Mr Gibson of his February 2020 meeting with Elwood Donaldson, the Water & Sewerage Corporation’s general manager - an occasion where the executive chairman was allegedly not present.

“The general manager reported that at no time did he acknowledge any additional fees or make any commitment relative to the same, outside of $20,000 that was issued as final settlement (Halsbury Chambers had proffered a $60,000 demand),” Mr Gibson said in his version. “The cheque was accompanied by a letter stating the same and urging Halsbury Chambers to return our files.”

However, Mr McCartney said Mr Donaldson informed him that the full $60,000 would be paid in two instalments. The first $20,000 was ultimately paid some months later, with the outstanding $40,000 becoming the subject of Halsbury Chambers’ legal action.

Mr McCartney added that Desmond Bannister, who as deputy prime minister is responsible for the Water & Sewerage Corporation, was “quite nonchalant about the matter” when approached in October 2020. And his notes to Dr Hubert Minnis have yet to receive a response.

“The Prime Minister was as quite as a lamb. He didn’t say a word,” Mr McCartney said.