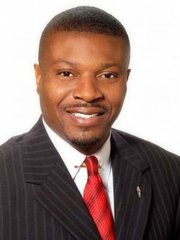 An ex-minister of state for finance yesterday backed income tax as a more "stable" and equitable alternative to the present regressive structure that is dominated by VAT and import duties.

Zhivargo Laing, who held that ministerial office during the 2007-2012 Ingraham administration, told Tribune Business that the Government's two main revenue sources are both regressive taxes in that they are not linked to a person's ability to pay. These consumption-based levies result in lower income Bahamians paying proportionately more of their income in taxes than their wealthier counterparts.

Mr Laing said: “I'm publicly on record talking about the fact that any reform of the Bahamas’ tax system has to take into account that, at present, our tax system is dominated by regressiveness. Meaning that as it now stands we do not tax on the basis of ability to pay. We tax the same rate, whether you are wealthy or poor.”

He thus joins both local and international observers, including the International Monetary Fund (IMF), in calling for The Bahamas to examine more progressive tax reform options.

Asked whether it was a mistake to select VAT in 2014, Mr Laing said: “Public policy is a matter of choices, and I think when the VAT was introduced, given the economic circumstances I thought that it was a mistake because of the implications that it had for dragging the economy.

“Had it been introduced in a more robust period, it would have had less of an impact on the economy, but credit has been added to your tax base to provide more yield for the Government. I don’t think that was a problem.”

Mr Laing argued that VAT's implementation was a “mistake” given the “dynamic nature” of the Bahamian economy. He said a further error was made when the current FNM administration raised the rate to 12 percent in 2018, VAT having first been introduced by the former Christie administration in 2014 at 7.5 percent.

He added: “When you introduce taxes you want to be staring at an upswing in the economy, not a downswing or a stagnation in it. You don't want to deal with taxation at those times.”

“There aren’t very many options. But with any reform you want to make it more equitable. You also need to make sure that whatever tax system you reform to has more reliability despite economic circumstances.

"Because if you have a consumption tax, when you have things ebbing and flowing, then your consumption tax moves with that ebb and flow. There are some taxes that tend to be more stable, and income tax is one of them."

LMAO. It really must be silly season election time!

Looks like we are being prepared for the slaughterhouse...

Will Peter Turnquest be next in this concerted income tax campaign ?