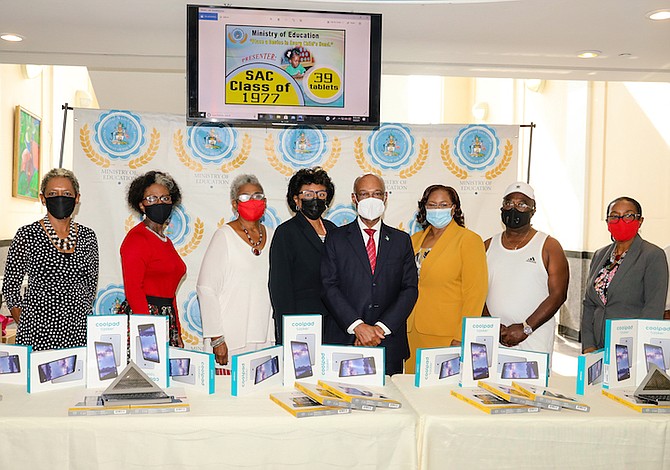 THE Ministry of Education’s device drive received a generous donation from the 1977 Alumni of St Augustine’s College.

The group, coordinated by Nickola Gomez-Dawkins, donated 39 tablets with keyboards and data to the cause on Friday, January 8. Mrs Dawkins said the group heeded to the ministry’s call and decided to take action as its members could not imagine a single child not being afforded the opportunity for an education. She also acknowledged Aliv as a critical partner in their initiative.

Education director Marcellus Taylor conveyed gratitude to the alumni. He said that “there is a spirit of excellence in SAC.”

Education Minister Jeffrey Lloyd, a former educator at SAC and the group’s former English language teacher, was pleased to accept the donation.

“I will not be satisfied until every public school child has a device exclusively for his or her education. This is the new reality and we have to accommodate it,” the minister said.

To date, 41,000 devices have been donated to the drive with about 6,000 more needed to meet the ministry’s goal.