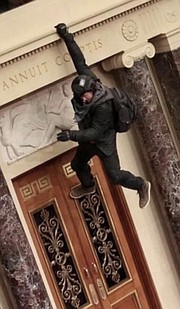 Josiah Colt abseiling from the public gallery to the floor of the United States Senate. 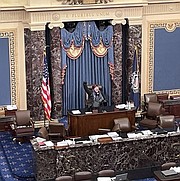 Josiah Colt, as he was pictured on the front page of The Tribune, after the storming of the US Capitol.

THERE is a disturbingly iconic image from last week Wednesday’s violent invasion of the US Capitol Building of a man clad in black abseiling from the public gallery to the floor of the United States Senate.

One of his legs is in mid-air with the other foot pressed against a door at the entrance of the chamber. Behind his outstretched dangling right arm holding on to the base of the balcony as he drops to the floor is an inscription in Latin engraved in stone above the doorway: “Annuit cœptis”.

According to CBS2 News in Idaho, the man in the photograph is Boise resident Josiah Colt, who later released a statement on the incident which read in part:

“[I] sincerely apologize to the American people. I recognise my actions that have brought shame upon myself, my family, my friends, and my beautiful country. In the moment I thought I was doing the right thing. … My intention wasn’t to put a stain on our great Country’s Democratic process.”

He stated that he was sitting in the chair of House Speaker Nancy Pelosi, though he was actually in the upper chamber in a chair reserved for Vice President Mike Pence.

The inscription evokes the founding boast of American exceptionalism, a mythology deeply ingrained in the insurrectionists malevolently storming one of the three branches of the U.S. Government as they attempted to overturn an election in favour of a president who inspired and encouraged their assault on the Capitol Building and on the democracy they ferociously claimed they were defending as patriots.

In their twisted conception, those they came to assail, abduct or perhaps assassinate were decidedly unpatriotic and irreligious heathens.

Despite the genocide of native peoples, the pernicious evil of slavery and the subjugation of women at America’s founding, and the subsequent vicious mistreatment of immigrants and brutality unleashed on other countries through American imperialism, the conceit of America as, literally, God’s gift to the world, remains a cardinal belief in the country’s mythology and self-understanding.

It is unsettling to listen to many around the world, including in the Bahamas, who have drunk this mythological Kool-Aid, spiked with some sort of historical amnesia-inducing narcotic.

Many refuse to more fully appreciate that America, while sometimes a city on a hill and a light to some in the world through its history, is as often a bastion of some of the most brutalising racism in human history, often a dark place where vast economic inequality and hunger is commonplace in the richest nation in history.

In an article in The Atlantic on the day of the rampage entitled, “Mass Delusion in America”, Editor-in-Chief Jeffrey Goldberg detailed his impressions of the mob in which he was embedded for several hours.

“What I do know, after spending hours sponging up Trumpist paranoia, conspiracism, and cultishness, is that this gathering was not merely an attempted coup but also a mass-delusion event, not something that can be explained adequately through the prism of politics.

“Its chaos was rooted in psychological and theological phenomena, intensified by eschatological anxiety.

“One man I interviewed this morning, a resident of Texas who said his name was Don Johnson (I did not trust this to be his name), told me that the country was coming apart, and that this dissolution presaged the End Times. ‘It’s all in the Bible,’ he said. ‘Everything is predicted. Donald Trump is in the Bible. Get yourself ready.’

Listen to many of the Bahamian supporters of Trump and you will hear the same religious fulminations and fundamentalism, including rationalizations such as: “He’s opposed to abortion”, which should not be a singular moral concern outstripping other ethical questions.

Other rationalizations include: “God can use a man with Trump’s lifestyle and past to do His work!”

The degree of rationalizing of Trump’s racism, crude behaviour and incitement of violence by people of faith, says more about them than about Trump.

As the insurrectionist intruders raced through the Capitol passing under its cathedral-like dome, many in the crowd were likely oblivious to the impressive fresco in the rotunda painted in 1865 by the Greek-Italian artist Constantino Brumidi, who also worked for a few years at the Vatican under Pope Gregory XVI.

“Visible through the oculus of the dome in the rotunda” is The Apotheosis of Washington. It is an idealized image of George Washington, the country’s first president and commander-in-chief of the Continental Army during the American Revolution.

“The Apotheosis of Washington depicts George Washington sitting amongst the heavens in an exalted manner, or in literal terms, ascending and becoming a god (apotheosis).

“Washington is draped in purple, a royal colour, with a rainbow arch at his feet, flanked by the Goddess Victoria (draped in green, using a horn) to his left and the Goddess of Liberty to his right.”

E pluribus unum, “Out of many, one”, the motto of the United States of America, appears on one side of the country’s Great Seal. The other side contains Annuit cœptis and Novus ordo decorum or “New order of the ages”.

To begin to grasp the fervor and motivations of the true believers who stormed the Capitol, what many have referred to as the “sacred temple of democracy”, is to appreciate the religious roots and theology of America’s founding, which is partially captured in the Latin phraseology found on America’s civic symbols.

To better understand America, is to appreciate both the virtuous aspirations and the virulent demons of the country and the struggle between both, or as one American writer observed, “the gap between our founding promises and our current reality.”

President-elect Joe Biden is correct when he speaks about the battle for America’s soul. But he is naive and given to romanticism in saying that the assault on the Capitol did not represent America.

The attack showcased America’s demons. The response to the insurrection by many showcased the country’s better angels. But the struggle between both is as old as the Republic and is a struggle without end.

A vast number of Americans are wholly ignorant or oblivious of revealing details of American history, religion, government and society,

So too are many Bahamians, who opine on America with precious little understanding of the dark and violent recesses of our neighbour, whose influence is embedded in our history and psyche in ways many of us barely appreciate.

Socially, culturally and intellectually, we have been inspired by the United States, even as our minds are colonised and corrupted by its worst excesses.

While Donald Trump is a man of limited intellect, not well-read, one of the more ignorant and incompetent presidents in American history, he possesses a genius-like hucksterism, capable of manipulating America’s darkest forces including: white supremacy, religious fanaticism, nativism, isolationism and the worst excesses of American capitalism.

A huckster is defined as: “anyone who sells something or serves biased interests, using pushy or showy tactics.” He has brilliantly used various media, including social media to rile, excite, inspire, motivate and unleash his supporters, culminating in the events of last week, with likely more to come.

Trump is not a religious man, except when it comes to his feverish cult of personality. But he knows how to manipulate people of faith and religious fundamentalists.

He blends the religious and civic features of American mythology in pursuit of his narcissistic ends, including utilizing the powerful media and influence networks of some American evangelicals, who happily do his bidding.

The Latin inscriptions on the Great Seal combine the intertwined civic and theistic religiosity that is the basis of the great mythologies of America, which contain clanging and unresolvable contradictions and meta ironies.

Those Bahamians who have given Donald Trump a pass and who simplistically believe that he and the Republican Party are reflexively good for our economy, fail to appreciate, despite the noisy evidence of the past four years, the greater danger of the most anti-democratic president in modern America.

Through sheer luck, the quick action by some security officials, insufficient coordination by the insurrectionists and other factors, America last week, barely avoided many more deaths, a hostage standoff, the possible assassination of some of its leaders and spiralling violence throughout the country.

During last year’s impeachment of Trump, Congressman Adam Schiff pleaded with and warned his colleagues: “You cannot constrain him. … Decency matters not at all. … Do impartial justice and convict him.” It is startling, the number of Bahamians who fail still to appreciate the depth of what happened last week.

Those who never thought such violent and seditious mayhem was possible in America, must reckon with their consciences for supporting an authoritarian who incited his supporters to insurrection

Though many who support Trump would not have been a part of the Capitol mob and are horrified by the events, they should recall the historical lessons of supporting autocrats and diabolical and pathological liars like Trump, which often ended in foreseeable events. It is not enough to say, “We could not see this coming.”

What did those who supported Trump feel about the white supremacy, misogyny, religious fanaticism and hatreds of his supporters? Why did it take bloodshed for many to somewhat or finally distance themselves?

Like those in the mob Jeffrey Goldberg described as delusional, there are those here at home who were also ensnared in a sort of mass and often willful delusion about Trump. This includes those who supported him in the name of God.

Who wrote this drivel? If you listened to Trump's entire speech yourself you'd know there was nothing "insurrectionist" about it. Of course you didn't listen to his speech, just the media spin about his speech. Maybe you should write another epistle about how BLM and Antifa burned down America for a full year and the same people who are screeching about "insurrection" now were encouraging it and suppressing the violence around it. I'm seeing a lot of Marxist nonsense in this piece as well, looks like the Bahamas might be quite infected with half baked intellectuals just like the US.