Nesbitt And Club In Top Spot On 13-Game Winning Streak 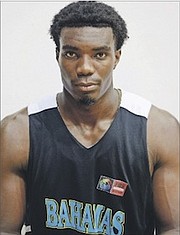 Shaquille Cleare in action for the Bahamas.

DAVID Nesbitt and his Minas Belo Horizonte club heads into Brazil’s Novo Basquete Brasil (NBB) mid-season break with a 13-game winning streak and the top spot in the league’s standings.

Nesbitt averaged 18 points, 8.5 rebounds per game and shot 58 percent from three-point range in a pair of wins last week as the team improved to 13-1.

The veteran forward finished with a season high 22 points and nine rebounds in an 85-75 win over Bauru. He shot just 3-5 from the field, but was also 3-4 on three pointers and 7-10 from the free throw line.

Two days later, he followed with 14 points and eight rebounds in a 70-63 win over his former club, Paulistano. Once again, Nesbitt scored most of his points from beyond the arc, where he shot 4-8 and made his only two-point field goal attempt.

After an opening night loss, Minas has reeled off 13 consecutive wins to surge near the top of the standings. The second half of the NBB season tips off on January 26 when Minas takes on Cerrano.

In his first year with the club, Nesbitt ranks third on the team in scoring at 13.9 points per game and second in rebounding at 6.6 boards per game. He is also shooting 58.3 percent from the field and 45.2 percent from three-point range. Nesbitt leads the team with 28 made three pointers and 41 made free throws.

This season with Minas marks Nesbitt’s third club in as many years in the NBB. He has also won two league championships during his tenure.

Cleare finished with 14 points and eight rebounds while Munnings added 12 points, seven rebounds and four assists, but their club fell to 8-5 after an 85-78 loss to the league leader, Sporting, who remains undefeated at 12-0. Through four games, Cleare is averaging 9.8 points and 4.3 rebounds per game. Through 13 games, Munnings is averaging 12.1 points, a team leading 8.2 rebounds and 4.2 assists per game.