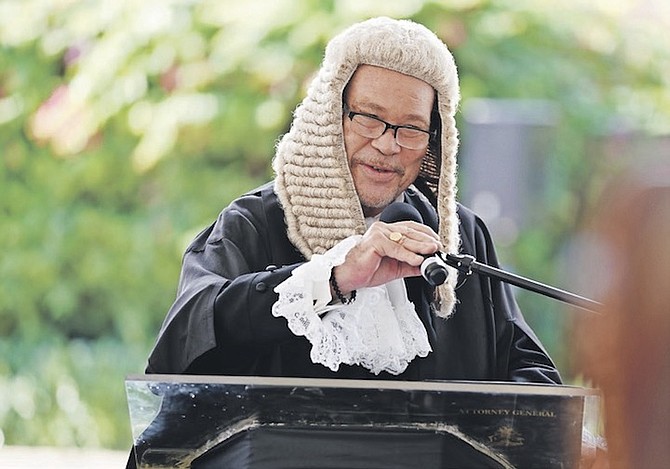 THE conviction rate for serious offences has increased to almost 90 percent despite the challenges brought on by the global pandemic, Attorney General Carl Bethel said yesterday.

Speaking at a ceremony held to mark the official opening of the new legal year, Mr Bethel said the conviction rate is 87 percent, up nearly ten percent from the 80 percent record in 2019.

“The director of public prosecutions continues to improve the performance of his prosecutors and I’m proud to confirm that in 2020 the conviction rate increased from 80 percent in 2019, to 87 percent in 2020,” he stated.

“Albeit, we know in the reduced circumstances caused by COVID, but I trust that the DPP will continue to exercise his wisdom and sound judgment to ensure that the gains of his prosecutors in 2020 will be repeated, if not exceeded in 2021.”

Mr Bethel said 18 nolle prosequi (a stop prosecution order) were entered in 2020, three of which pertained to accused persons or defendants who had passed away.

He said 2020 was an unprecedented year that he believes will be recalled as the “lost year”.

He also spoke of the judiciary’s move to become more digital.

“With regard to the judiciary, I note the move toward digitisation was not COVID induced movements. We were working assiduously in 2019 to bring about the move towards (an) improved (and) increased…fully digitised case management system.

“The Court of Appeal introduced remote hearings by the Zoom digital platform and that has enabled them to dispose of both criminal appeals and civil cases and they have drafted practice directions which set out how these hearings should occur. The court’s website was also upgraded to allow access to audio transcripts.”

As it relates to the Law Reform Commission, Mr Bethel said the body successfully drafted several new laws that have been enacted in 2020. He added that 41 of the bills that have been passed were drafted by the commission.

“Unfortunately, the Registrar General’s Department has suffered greatly in the pandemic,” Mr Bethel continued. “Prior to the start, the recording of deeds was done in 14 days and they were aiming to lessen the time. But unfortunately, the Registrar General’s Office is a very enclosed office requiring a lot of physical contact with persons...so it became somewhat of a repeat hotspot and we had sequences of infections. Unfortunately one person, a most able officer, Wellington Smith, passed away.”

Mr Bethel said like most businesses amid the pandemic, the Registrar General’s Department has implemented an email system for the submission of company and intellectual property applications.

“In May 2020 it was discovered that one of the department’s systems that houses the civil and corporate registries had been breached since at least October of 2016, and in fact by one review, it is an ongoing system failure,” he said.

In response to the attacks, court officials along with the RBPF immediately collaborated to improve security.

“They reconfigured the existing hardware components, they removed 45 obsolete computers from their network and they have also upgraded all computers both here and in Grand Bahama,” he said.

As it relates to the Industrial Tribunal, Mr Bethel stated: “The filing system of the Tribunal has been entirely digitised. By this revolutionary initiative, in the development of what has been called the first ‘Smart Court’ the president has thrust the Industrial Tribunal to the very forefront of the digitisation of legal services in The Bahamas and, indeed, the Caribbean region; which is now being pursued by the entire judiciary in The Bahamas.”