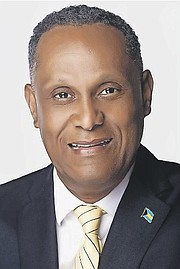 THE Progressive Liberal Party’s COVID-19 task force urged government to release a structured plan that allows for more virus testing throughout the country.

The move, the task force insisted, could accommodate a new US travel policy meant to combat further COVID spread which is set to go into effect later this month.

Task force co-chair Senator Dr Michael Darville issued the call while speaking to reporters at the PLP’s headquarters Friday as he criticised the Minnis administration for being unprepared and not having a clear plan on the way forward.

This comes after the US Centres for Disease Control and Prevention (CDC) announced Tuesday that all air passengers entering the US will be required to produce a negative COVID-19 test taken within three days prior to arrival.

On Wednesday, Tourism Minister Dionisio D’Aguilar told Tribune business officials were moving to make a case to US authorities for the Bahamas "to be at the front of the queue" should the US introduce exemptions from its testing policy.

However, on Friday, Dr Darville said the government’s response to the move is a clear indication that officials were caught off guard and not prepared despite obvious signals – a situation he claimed could’ve been avoided.

“If we had a plan in place already, we would not find ourselves in the position we’re in today,” he told reporters Friday. "It’s quite obvious that there were going to be stricter measures put in place by the United States with international travel and I felt that we should’ve had a plan in place and not scrambling to put one in place now.”

The senator also pointed to what he termed inadequacies of government’s testing regime, insisting officials needed to take responsibility for their actions and address the issues ahead of the new US policy.

“We already know that there are deficiencies for testing in the family islands. We’ve been calling from day one for more testing to decentralise the labs and to ensure that smaller labs have the capability, particularly in our family islands, to do testing and so now you see there has been an issue in Abaco with the nurses on the sick out”.

“A lot of family islands are in a similar position with the smaller clinics. They do not have the capacity, to my understanding at this particular time, and that’s clear because many tourists who were in those islands tried to get the necessary testing and weren’t able to do so.”

He added: “It’s not that they didn’t make an attempt to do the testing on day five. The infrastructure was not in place to do so and so yes, we hope and pray that the minister finds a way through debate or through negotiations to get a waiver but what we believe we need to do is put the infrastructure and the testing protocols on the ground now and the ministry must begin to modify its travel passport to accommodate the new CDC guidelines.”

During a press conference last Friday, health officials revealed that 46 percent of travellers to The Bahamas did not comply with the fifth day COVID-19 antigen testing requirement.

To this, Dr Darville stressed: “You could imagine if we had a massive surge of tourists in the country during the Christmas holidays, were we prepared to do the five-day testing and the answer to that is no and so there’s no need to beef about (it). Admit that you’re wrong, fix it and ensure that if the government is unable to do it, get the private sector involved so that it could be done.”

Meanwhile, as it relates to the government’s COVID-19 vaccine national plans, Dr Darville said the PLP's position on the matter has not changed and again stressed that there needed to be more transparency from the government on when a vaccine will be made available in the country.

He continued: “The prime minister in his address clearly indicated that a committee has been established. Dr (Merceline) Dahl- Regis will be heading that committee and in short order, the government will bring forth a plan on what they intend to do.”

“Our position is still the same. We’re saying to the government it’s time to be proactive. We need to move swiftly and we need to know exactly what is happening and what the government intends to do.

“We must realise that we also have a private medical community who rely heavily on what the Ministry of Health will be telling us what to do and its imperative that we know so that we can move swiftly and we can prepare ourselves for the potential roll-out.”

The PLP must have a magical 8 ball loaded with cookie cutter phrases. Once a week they shake and out comes the theme of the day.

What colony's PopoulacesOrdinary at large (POAL) needs the most is seeing if there be's some kind of an American test capable to detect what in the livin' hell could have possibly so possessed America's white evangelicals hold the perception of Trump being anything coming close to a Christian acting president...with Billy's son Franklyn, jumpin' cue be tested - right behind the My Pillow Guy.
Shakehead a quick once for upyeahvote cannot just be making such 'My Pillow Guy's nonsense up. Shake twice for not?

Do you know the Covid-19 virus acts differently over different ethnicities? Take for example Haiti and the Dominican Republic. The DR has ten times the number of cases than Haiti and similar fir the number of deaths. And whilst most African countries have flattened their corona curves, most countries like Italy, Canada, UK and the USA, continue to have surged. Then Cuba has a surge that started in December and has recorded more cases in the past few weeks than it recorded all year long. But wait, the same thing is happening in Barbados. It is seeing a surge in cases that is almost doubling the number of cases it had all of last year.

And the Canadian border between the US and Canada remains closed for nonessential travel.