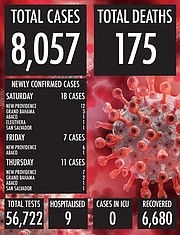 TWENTY-FIVE cases of COVID-19 were recorded between Friday and Saturday bringing the nation’s total to 8,057, according to data from the Ministry of Health.

Seven of those cases were confirmed on Friday while eighteen were recorded the following day.

As of Saturday, nine cases were in hospital, however, none of them were in the intensive care unit.

Of the more than 8,000 cases recorded, only 1,150 are listed as active according to the latest report.

There have been 175 COVID-19 deaths, with 15 currently under investigation.

Last week, a local infectious disease expert said it appears the recent holiday celebrations did not lead to an uptick of cases as officials initially expected due to the consistent low numbers of cases being reported recently.

“And COVID-19 is going to be here for a while so it’s very important that we learn to consistently do those guidelines so we can live with it and keep these cases low and to a management level essentially and so that could be a sign of that and what is happened and that’s very good because the human behaviour is a very important part of what spreads COVID-19,” Dr Nikkiah Forbes said last week.