Justice Loren Klein spoke out in a January 15, 2021, ruling on the “somewhat unusual” situation surrounding the Bahamas Public Services Union (BPSU) election in which the Government’s top labour official performed a total u-turn on the poll’s validity. 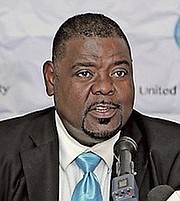 John Pinder, acting in his capacity as registrar of trade unions, had rejected complaints from a rival slate of candidates in certifying that the September 28, 2020, vote that returned incumbent president, Kimsley Ferguson, to office had been “properly conducted”.

That certification was issued on October 5 but, after the so-called POWER team of rival candidates launched their Judicial Review challenge on November 9, Mr Pinder said he had “made a mistake” because new information had raised doubts on whether the vote was properly supervised.

This “somewhat remarkably” resulted in the Attorney General’s Office, representing Mr Pinder, requesting a Supreme Court order that the election was “void” and a new poll should be held when the parties appeared before Justice Klein on December 4, 2020.

This was opposed by Khalil Parker, the Bahamas Bar Association’s president who was representing the BPSU, on the grounds that Mr Pinder and the POWER team were involved in “collusion”. Justice Klein, agreeing that the call to “void” the election results was akin “to putting the cart before the horse”, declined to grant the submission by the Attorney General’s Office.

Mr Pinder’s u-turn on the election’s certification effectively meant he had sided with the POWER candidates’ team, headed by Alexander Burrows Jnr. This was despite the group, as one of its grounds for Judicial Review, accusing the director of labour of being “conflicted and biased” because their opponent, Mr Ferguson, had been Mr Pinder’s vice-president when the latter headed the BPSU.

Unravelling these developments, Justice Klein nevertheless rejected the POWER candidates’ bid to overturn the election outcome despite Mr Pinder’s u-turn. Given the frequent challenges to trade union election results, he called for Parliament to upgrade the laws and “eclectic mix of rules” that govern such polls to prevent the courts from becoming overwhelmed.

Justice Klein also called for Parliament (and the Government) to consider laws permitting “a more direct method of challenging union elections” than Judicial Review. He argued that the latter’s narrow focus on the registrar’s decision to certify the results could magnify “minor irregularities or breaches” to such an extent that results are declared invalid even though the outcome has not been affected.

“It is also fitting, in the circumstances of the frequent challenges to union elections which besiege the courts, to append to this judgment a few observations which may have a bearing on these matters,” Justice Klein wrote.

“The first is that the provisions of the Industrial Relations Act have clearly not kept pace with the developments in international law dealing with the rights of unions and their members, nor has it evolved to keep pace with the burgeoning governance requirements of unions in the active labour and industrial law context of The Bahamas.

“As illustrated by this case, and the referenced authorities, it seems that union elections are conducted according to an eclectic mix of rules derived from the unions’ constitutions, principles interposed from the Parliamentary Elections Act, common law principles, and sometimes the edicts of the Registrar.”

Justice Klein said “much litigation and dissension” could be avoided if trade unions developed their own elections rules in compliance with the Industrial Relations Act, setting out the procedures to be followed on nominations, balloting and voting processes.

He added that this could be benchmarked against international laws such as the UK’s Trade Union and Labour Relations (Consolidation) Act 1992, or treaties that The Bahamas has signed such as the International Labour Organisation’s (ILO) Convention 87.

The judge also described Judicial Review as “a rather blunt instrument” for challenging election results because it does not scrutinise votes to determine if there are irregularities. As a result, Justice Klein warned that small breaches could result in an election result being overturned even if they have no material impact on the outcome.

“It might therefore be appropriate for Parliament to give consideration to providing for a more direct method of challenging union elections, which allows the court to uphold the results unless the irregularities or omissions would affect the outcome or overall fairness of the election, and not be straitjacketed into nullifying elections for procedural errors which do not have this effect,” he wrote.

Detailing the BPSU dispute’s background, and acknowledging its status as one of The Bahamas’ largest unions representing public sector workers, Justice Klein said the election “was not uneventful” both before and after the poll.

Just three days prior to the vote, Mr Burrows and POWER voiced concerns to Mr Pinder about the symbol being used by Mr Ferguson and his ‘Workers Team’. And, two days after the poll, they urged Mr Pinder not to certify the results on various grounds including “that several persons who ran as candidates were ineligible”.

The trade union registrar, who is also director of labour, replied in an October 7, 2020, letter that he had investigated the concerns and felt they did not compromise the election’s integrity. The certification had been issued two days’ before, prompting POWER to initiate its Judicial Review proceedings on November 9, 2020.

“It seems the applicants were intent on including in their grounds every possible fault or recrimination they could attach to the conduct of the election,” Justice Klein wrote. However, the POWER team and their attorney, focused their attack on the ground involving the BPSU election’s non-compliance with the Industrial Relations Act’s section 20.

This requires that union elections be held by secret ballot, and that Mr Pinder as registrar of trade unions supervise the vote himself of via “designated officers”. Fears of non-compliance in this area also resulted in Mr Pinder’s change of heart, as some ballots used in Grand Bahama were not signed by the “designated officer” but another Department of Labour official who oversaw the poll.

But, given the absence of a statutory or legal requirement, Justice Klein ruled: “I am unpersuaded that the failure of the designated officer to sign the ballots amounts to a failure to supervise within the context of section 20....

“I must indicate that this particular aspect of the case has caused me considerable difficulty, not only because it involves the construction of a problematic bit of legislation but because, in coming to my decision, I have had to reject the position contended for by the registrar. I do not do so lightly, and I have paid the highest regard to the views expressed by the registrar.

“But I bear in mind that although the registrar is not to be reduced to ‘a cipher’ with respect to the performance of his statutory functions vis-à-vis unions, neither does section 20 constitute him a mini-Parliamentary commissioner or presiding officer armed with coercive powers to conduct union elections pursuant to the statutory code for parliamentary elections, or according to rules imposed at his whim.”