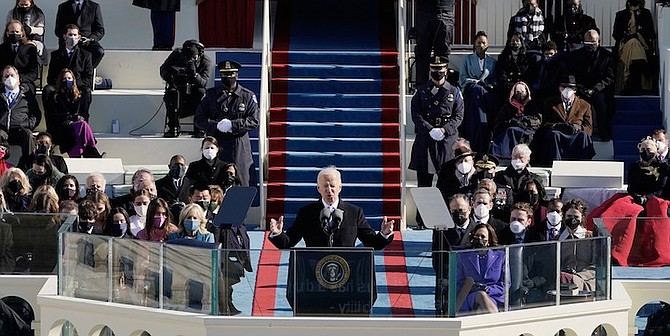 PRESIDENT Joe Biden speaks during the 59th Presidential Inauguration at the US Capitol in Washington yesterday. Photo: Patrick Semansky/AP

“THE Civil War was still going on. It’s still to be fought, and regrettably it can still be lost.”

The purple tie worn by President Biden and the purple outfit worn by Vice President Kamala Harris, symbolised the blending of red and blue America, a political and moral aspiration for the incoming administration.

The images and pageantry of Inauguration Day were moving. They represented an America striving and groaning to be “a more perfect Union”. The world witnessed the first female Vice President, with Caribbean and Indian roots, sworn in by the first Latino Supreme Court Justice, who is also a woman.

Featured at the Inaugural, escorting Harris and her husband as a security official, was Officer Eugene Goodman. He was the policeman who heroically led a part of the Capitol mob away from the Senate chamber the day of the insurrection.

“We’ve seen a force that would shatter our nation rather than share it, would destroy our country if it meant delaying democracy. And this effort very nearly succeeded. But while democracy can be periodically delayed, it can never be permanently defeated.

“In this truth, in this faith, we trust. For while we have our eyes on the future, history has its eyes on us.”

At a pre-inaugural memorial service at the National Mall in Washington Biden was joined by Cardinal Wilton Gregory, the city’s Roman Catholic Archbishop and the first African American cardinal.

Before heading to the Capitol, Biden attended mass at the Cathedral of St Matthew the Apostle, “the patron saint of civil servants”.

We have been here before. The inauguration of Barack Obama dazzled in hope, symbolism and promise. But we are now chastened. We are chastened by the backlash to the first black President and by the explosive puss of white supremacy of the past four years.

Gorman noted in her poem: “History has its eyes on us”. We must have our eyes on history. The master documentarian Ken Burns averred:

“The story of our democratic experiment is perhaps best told through our nadirs, of which there are many. In order to truly understand and appreciate the promise of the country, still unrealised for too many, we must explore the points at which it was most challenged, at times when it appeared even to almost fall apart...

“History does not unfold in cycles. We are not condemned to repeat what we do not remember. Our world is too chaotic for those simplistic ideas. What we recognize in history is a combination of fact and myth, often at war with one another.”

Many Americans and Bahamians fail to appreciate the founding and recurring myths of America, especially those espoused and glorified by white Christian nationalism.

Donald Trump represented millions of Americans, including many current leaders in the Republican Party, who though quick to decry so-called identity politics, loath other human identities and cultures while revelling in and endlessly promoting the identities of white Christian America.

The aspiration of E Pluribus Unum (Out of Many, One) is detested in the hearts of supremacists who festered in Trump’s attacks on immigrants, foreign nationals, black and brown Americans and others who did not fit their idealised racialist image of what constitutes a true and supposedly wholesome American.

Most Americans, like most Bahamians, are a creolized and miscegenated blend of cultures and bloodlines. The myth of ethnic or national purity is one of the great weapons of fascism and perverted nationalism. There are no “pure” Bahamians nor Americans. Most human beings are a mixture of physical influences.

Ken Burns stresses: “The American promise has long been at odds with reality.” His works, including his epic series on the US Civil War, explore the dissonance, divide and gap between promise and reality.

Even as the Statue of Liberty has been a symbol of hope for generations of immigrants, James Baldwin described Lady Liberty as “a very bitter joke” to black Americans.

A dear friend, an American educator for nearly 50 years, noted in response to last week’s column:

“The great apostasy of [America]: exceptionalism carved into a constitution built on slavery as a foundation. That is the deepest sin of our inception. The Civil War and Reconstruction attempted to reset the journey. The Civil Rights movement was the next part of the process.

“Trump ripped all of that to shreds and revealed the poison that is so deeply embedded in the core of our history. The failure revealed itself in the kind of delusionary passion combined with religious fervour.”

“We’ve got some difficult days ahead,” thumped Dr Martin Luther King Jr to a large church crowd on April 3, 1968, at a rally in Memphis, Tennessee, after travelling to the city to revitalize its non-violent civil rights movement by participating in a sanitation workers strike.

Dr King spoke of the Promised Land of racial and economic justice he envisioned. Yet he emphasized: “I may not get there with you.” Reportedly also suffering from depression, King knew his life was in peril.

He fully grasped that the toxic combination of white supremacy, economic inequality and militarism in America required unceasing struggle beyond his lifetime, which might cease at any minute.

Dr King noted of the Eastern Airlines flight the previous evening from Atlanta to Memphis: “As we got started on the plane – there were six of us – the pilot said over the public address system: ‘We are sorry for the delay, but we have Dr. Martin Luther King on the plane. And to be sure that all of the bags were checked and to be sure that nothing would be wrong on the plane, we had to check out everything carefully. And we’ve had the plane protected and guarded all night’.”

While standing on the balcony of the Lorraine Motel less than 24 hours after his final sermon, waiting for a car to take him to dinner at Reverend Billy Kyle’s residence, King was felled by a single .30-06 bullet fired by James Earl Ray.

“According to [Taylor] Branch, King’s autopsy revealed that his heart was in the condition of a 60-year-old man rather than that of a 39-year-old such as King, which Branch attributed to the stress of King’s 13 years in the civil rights movement.”

The barrel of white supremacy that murdered the 39-year-old Dr King is the same bloody force that exploded in the US Civil War, during Jim Crow and at the January 6 insurrection at the Capitol.

The fingers on the trigger of such unrelenting violence are white Christian nationalists, who believe they have instructions from God to keep America pure. Sounds familiar?

Writing in The Atlantic, Emma Green observed: “The name of God was everywhere during Wednesday’s insurrection against the American government. The mob carried signs and flags declaring JESUS SAVES! and GOD, GUNS & GUTS MADE AMERICA, LET’S KEEP ALL THREE. Some were participants in the Jericho March, a gathering of Christians to ‘pray, march, fast, and rally for election integrity’.

“After calling on God to ‘save the republic’ during rallies at state capitols and in DC over the past two months, the marchers returned to Washington with flourish.

“The group’s name is drawn from the biblical story of Jericho, ‘a city of false gods and corruption,’ the march’s website says.

“Just as God instructed Joshua to march around Jericho seven times with priests blowing trumpets, Christians gathered in D.C. blowing shofars, the ram’s horn typically used in Jewish worship, to banish the ‘darkness of election fraud’ and ensure that ‘the walls of corruption crumble.’

“The Jericho March is evidence that Donald Trump has bent elements of American Christianity to his will, and that many Christians have obligingly remade their faith in his image.

“Defiant masses literally broke down the walls of government, some believing they were marching under Jesus’s banner to implement God’s will to keep Trump in the White House.”

The inauguration of Joe Biden and Kamala Harris is but an opportunity. But the forces of darkness and hatred in America are unrelenting and powerful and must be challenged in every generation.

Dr King’s legacy and vision have often been romanticised. He understood America’s promise. But he just as much understood - and was the victim of - the evils of America, which will not relent to symbolism and easy asides about the arc of the moral universe bending toward justice.

Donald Trump is not anomalous in terms of the white, Christian nationalists enraged about the dream of Dr King and the scores of Americans who share his vision of E Pluribus Unum.

Another Trump, perhaps one more competent, intelligent and strategic, is watching and waiting for his opportunity for power. The survival of American democracy is not assured.