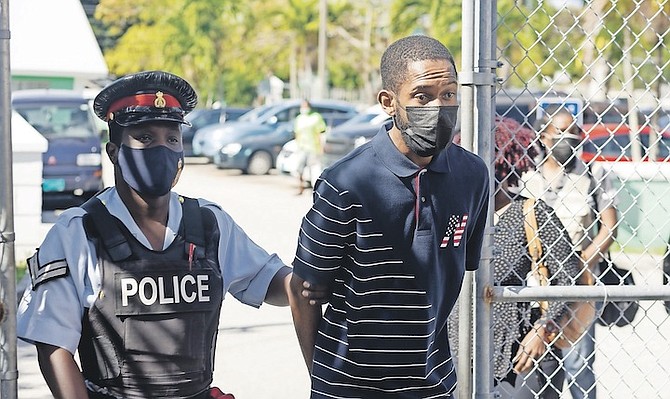 A 33-year-old man was yesterday charged with two counts of killing in the course of dangerous driving in connection with a horrific three-car collision that claimed the lives of a married couple on Christmas night.

Alexander Butler appeared before Chief Magistrate Joyann Ferguson-Pratt after he was accused of driving his vehicle on West Bay Street in a manner dangerous to the public which ultimately led to the deaths of Brent and Eulona Johnson.

The prosecution also alleged that Butler drove his car while he was not covered against third party risk insurance.

According to initial police reports, shortly after 6pm police received reports of a traffic accident that occurred on West Bay Street and Blake Road. When they arrived at the scene, they found a three-car collision involving a black Honda Accord, a burgundy coloured Nissan March and a black Chevy Malibu.

“An inspection of the vehicles revealed that six occupants sustained injuries as a result of the accident,” police reported.

“Emergency Medical Services were summoned and following their examination of the victims, an adult male and female were pronounced lifeless on the scene and four persons were transported to the hospital to receive medical attention.”

During the arraignment, Butler denied causing the couple’s death through reckless driving, but admitted to driving without third party risk insurance.

After the charges were read, his attorney asked the magistrate to consider granting his client bail; however, the prosecution requested more time to assess their position on the matter.

As a result, the case was adjourned to January 28 for a bail hearing.

Butler was remanded to the Bahamas Department of Correctional Services in the interim.