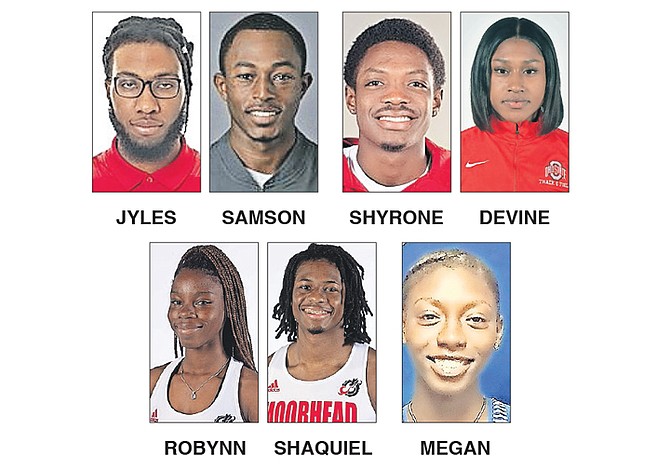 IT was a busy weekend on the collegiate track and field scene for a number of Bahamian athletes, led by Olympic qualifier Samson Colebrooke and jumpers Jyles Etienne and Grand Bahamian Shyrone Kemp.

Despite the increase in the coronavirus pandemic, track and field is one of the sports that continues to proceed, but without fans’ participation in the stands.

Colebrooke gearing up for Tokyo

Having already qualified for the men’s 100 metres at the postponed 2020 Olympic Games in Tokyo, Japan, Colebrooke, a senior at Purdue University, showed his versatility, competing in the longer sprints.

At the Gladstein Invitational at the Gladstein Fieldhouse at Indiana University, Colebrooke won the 200m in a time of 21.90 seconds, ahead of three competitors from Michigan, led by Noah Stallworth, who did 22.21 for second. Colebrooke, a native from Exuma who graduated from Queen’s College, also participated in the 400m where he clocked 50.59 to win his heat, but placed fifth overall. The winning time was 48.37 by Dubem Amene from Michigan.

Etienne, also in his senior year at Indiana State University, won the men’s high jump in Bloomington, Indiana, with a leap of 2.06 metres or 6-feet, 9-inches, the same height as Cassidy Henshaw of Michigan, who had to settle for second on fewer knockdowns.

At the Marauders Track and Field Invite in Bismarck, Minnesota, Shyrone Kemp, a sophomore at Minnesota State University at Moorhead, matched his own school men’s triple jump record with a leap of 15.17m (49-9 1/4) that he established last year.

In the process, Kemp’s performance was listed as the third best in the nation at the National Collegiate Athletic Association (NCAA) Division II (DII) level as he also surpassed the NCAA DII provisional qualifying standard.

Kemp, coached by Bahamian Olympic high jumper Trevor Barry, added a second place finish in the long jump with his leap of 6.86m (22-6 1/4).

Devine Parker, now in her sophomore year with the Ohio State University Buckeyes, was at the Horace Ashenfelter Indoor Track at the Penn State Invite in University Park, Pennsylvania where she finished third in the 60m in 7.62. She had the second fastest qualifying time of 7.53.

Adrian Curry, also competing for Ohio State, was seventh in 7.26 after he posted the sixth fastest qualifying time of 7.06. Curry was also tenth in the 200m in 22.49.

This weekend at the Woo Pig Classic at the Arkansas-Randall Tyson Track in Fayetteville, Arkansas, University of Kentucky Wildcats’ sophomore Megan Moss placed eighth in the women’s 400m in 53.52. She also ran on the opening leg of the Wildcats’ 4x400m relay team that included Abby Steiner, Masai Russell and Dajour Miles that finished third in 3:33.48.

Cartwright in action in Mankato

Minnesota State University at Mankato’s sophomore Denisha Cartwright got second in the women’s 60m hurdles in 8.84 seconds at the Chuck Peterson Dual at Myers Fieldhouse.

In the preliminaries, Cartwright produced the second fastest time of 8.84. Her Minnesota State freshman Lyric Brennen had the fifth fastest time of 9.34, but she didn’t contest the final.

Cartwright, now in her junior year, also contested the 60m where she was third in 7.79. She had the second fastest qualifying time of 7.76.