We Have Let Our Guards Down: Emergency Rules To Be Extended Until May 23 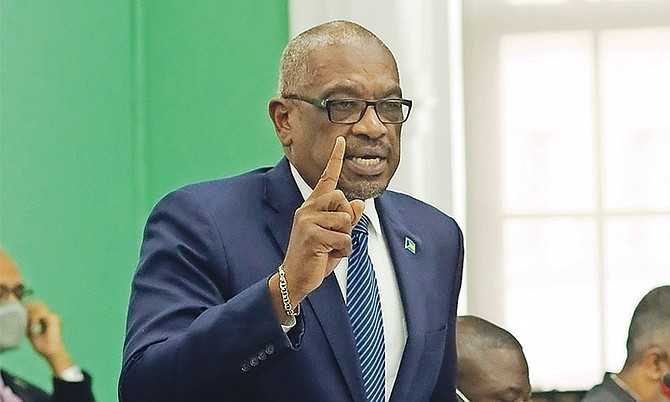 PRIME Minister Dr Hubert Minnis announced yesterday the government’s intention to extend the COVID-19 state of emergency and associated emergency orders until May 23.

He added Bahamians have appeared to let their guards down, pointing to funerals and Junkanoo parades that have defied protocols.

As he read a new resolution to extend the order, Dr Minnis said local officials can now see a “light at the end of the tunnel,” but people should remain vigilant to ensure the country does not regress regarding the number of positive cases, or worse, end up in a similar position to that of the United States.

The country has been under a state of emergency since March 2020.

“I want to say briefly that I want to remind the Bahamian public that, yes we are doing well, however we are letting our guards down, which could have devastating effects on our country moving forward as we look around and see the number of funerals in violation of the order,” Dr Minnis said after he read a resolution into the record of Parliament to extend the Emergency Powers Order.

“There are a number of memorials in violation of the order and even Junkanoo groups engaging in rushouts in violation of the order. I want to remind the public that we should all be vigilant because it only takes one individual to become infected and the virus can have catastrophic and devastating effects on our society placing us in a similar position as seen in the north.

“I recognise how individuals feel especially about their loved ones and want to participate in funeral activities and I recognise that in many instances this may sadden families and hurt families, but I want to remind individuals that I myself experienced this when my brother had passed away during Hurricane Dorian and though both myself and my family were grieving and hurt, we kept that internally because we felt that the country came first.”

Yesterday Dr Minnis said his family made the decision to delay the second brother’s funeral for a month out of respect for protocols in place.

He continued: “Not many may have known that but during that time I too was hurting, and I know what families feel having gone through that myself. I only want to remind them that people spread viruses and I only ask that they remain vigilant for at least another month because the vaccine may possibly be here soon and if we remain vigilant, we will be able to protect our future and our society.

“I want to remind the Bahamian public of this: I am not trying to be hard or difficult. I love them very much, but I love even more our country and the future survival of our country and our young people whom we reserve our country for and whom we pride it to ensure that they have a great future.”

The Killarney MP also made an appeal to the families of other well-known people who have died in recent weeks to obey the standing COVID-19 rules when planning their funerals.

“I too would love to participate, but I ask them to put their country first. That one infection within a funeral or parade be it by Saxons, Valley or anyone else can set us back to where we came from and put us on the track where hotels opening can be jeopardised.”

He noted a recent announcement from officials at Sandals that resorts in New Providence and Exuma are expected to open soon.

“So, I beg individuals to just continue to follow orders for at least an additional month. I am very happy to see how they responded to mask wearing and ask that those who are not wearing masks to continue to wear them as we can see light at the end of the tunnel.

“The pain that many would have felt because of the lockdowns and curfews, they were not intentional. They were only to save lives and save our country.”

The extension will be debated in Parliament tomorrow.

What a bunch of ignorance. If this person was minimally educated he/she would know we do not have the population size to develop economically viable industries. It is referred to as economies of scale and scope. Neither do we have the size of market nor the scope of infrastructure to go in that direction . Just be patient. Just trust our PM. And stop being so envious.

"WE" are letting our guards down ??? On 20th January the WHO publicly admitted that the entire testing regime that has been in place since last March as the "gold standard" of testing....is wrong. The high cycle PCR testing has now been deemed to produce an unacceptably large amount of 'false positives'. It is now a scientific fact that the ratio of false positives is consistent with what the medical community has been telling us is the overall ratio of 'cases' per people tested, which is why the case rate has gone up with more testing, whilst the death rate has declined. That is why there is zero correlation between cases and deaths !! So the entire justification for this 'man of science' to give himself unquestionable power and choose barbaric lockdowns as the only solution to the problem was based on 'false positive's . So Minnis has ruined the economy based on bad science and now WE are letting our guard down.......The only way this man is ever going to stay PM after the end of this term is by making his emergency powers permanent ...aka totalitarian dictator.

new WHO recomendation is: you are not a covid case when you test PCR+ however have NO covid symptoms.

changed just ONE day after Biden took the office....

The whole clown show is going to end soon

new citizen - yes, the WHO posted this. Covid will be gone soon because they (the CDC) will order the testing centers to reduce the mulitplication factor of the tests. It should only be 20, but they have been running 37-42 factor. Biden is in now, so lower case numbers are needed (and will be provided). Remember there is only ONE doctor in the whole world that knows about viruses and that is Dr. Fauci - glory be to his holy name.

Provide the link please. You know the CDC and the WHO are not the same thing, right? Do you believe the only reason they get hospitalized is because a test says positive? You don't even live in the US but somehow your view is so US centric that you are not aware that other countries do their own thing? Biden is the defacto ruler of the whole world? He's going to stop the virus in South Africa, in Italy, Peru?

That’s why the WHO notice urges lab technicians to view weak positive test results (ones with high cycle thresholds) with caution and to consult the instructions on their PCR machinery before issuing positive or negative test results.

Here you can see they are trying to downplay the notice from the WHO and just saying they are reminding lab technicians to read the manuals that come with the testing equipment - as if lab technicians are now suddenly idiots and it's all their fault. If you read that entire article you will get the feeling of how ethereal and fluid the whole thing is and how it is open to opinion and interpretation. Notice also that they are careful not to mention what the correct number of cycles is. This allows them to give instruction to labs in different areas of world, assigning different cycles to different regions to fit their goals. You will notice how "cases" are super high in all of the developed countries. I won't mention race here, because you know we can't talk about that anymore. Race and male/female no longer exist by decree of Nancy Pelosi.

If you look here :

You will see a long list of "publications" which they use to make it seem that they know what they are talking about. Meanwhile "cases" rise and "deaths" rise.

Wow, you are deep into the craziness. I hope it's just some good smoke talking.

If you want to see craziness, check out this link. Maybe they want police officers to trip over their hair while chasing criminals? You would also notice how the changing rooms are not open in any clothing stores in the USA - as if face masks do not work in changing rooms. But check this nonsense out from London

“WE” are not letting our guard down. Your police force is still not enforcing the orders for a few so the masses will suffer. It was no secret that funeral or Junkanoo rush outs were happening.

so true, like always, the law is conveniently enforced. So , the question is, should we obey the law? If it applies to different groups , let us abolish it.

This most corrupt, incompetent, arrogant, nasty and vindictive buffoon should be made to sit on his pointed index finger and rotate at high speed for at least 24 hours!

Come on .please. We have youth reading this filth. Please. Your envy, jealousy and vindictive and spineless stupidity reflects bad on our nation.

You've posted much 'filthier' on numerous occasions. Suggest you give up your piousness act because it could never be one of your strong suits. LOL

This incompetent excuse for a leader just doesn't know when to quit. Do we have to wait until two weeks before the next election when he pretends he is giving HIS PEOPLE, whose time it never was, a big gift?? 🤢😢😒🤢. Too bad the middle finger isn't available...

Stop being a jackass, Minnis! Downtown has been broke for almost a year and we have no money to pay property taxes and have run through our savings. You can't get what we don't have any longer.

He did not go to his relatives funeral services because he did not want to go. He goes where ever he pleases.

Now he is using his Trump words. He loves some people. .Really???

who falls for that. ? crap.

LOL IS ALL YOU CAN DO

My God this what we got... This guy still guessing.. He is lost at sea

Worse than that. He's also corrupt, arrogant, nasty and vindictive.

"Bahamians have appeared to let their guards down, pointing to funerals and Junkanoo parades that have defied protocols."

We didn't see the whole of the Bahamas on the junkanoo parade. We saw a group of people that the police allowed to "disperse". Address the people in violation. A year of continuous emergency orders is an inability to plan and an abuse of power.

Is this man serious hes not feeling what we are because he goes as he pleases out having 4 course meals while bahamians starving and always on a flight going somewhere and saying about his brother funeral he maybe disnt give a shit about his brother that's why he couldnt care less about his funeral this a bunch of b.s going on

This FNM regime is going to go down as the biggest betrayal of the Bahamian Peoples in history. Our elected representatives have mindlessly fallen in line with the globalist oligarch's takeover of the world, using fear and corruption to destroy our way of life, so that they can 'reset' the world in whatever manner they see fit. This pandemic is a mass media event only. I dont know anyone that even knows anyone that has died of covid yet this tyrant still thinks it's OK to tell us if we can move around, or do our jobs, or spend time with our loved ones. You are a Monster Mr Minnis and all you other so-called leaders, hiding behind this maniac, lining your pockets whilst the wider population gets fed to the wolves, are no better.