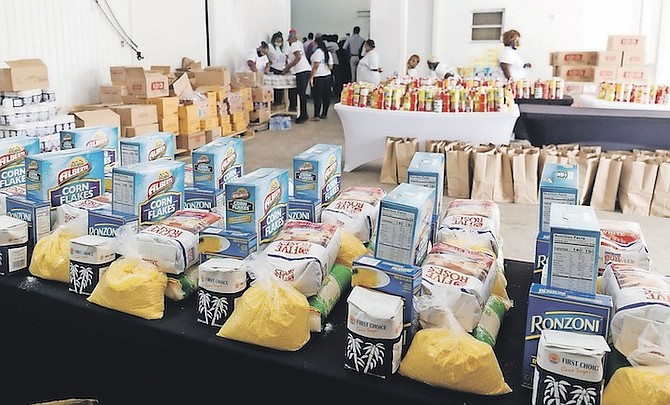 DONATIONS given previously by Rupert Roberts to the Feeding Network. Officials say the National Food Distribution Task Force is due to end in March, but 100,000 will still need food assistance then.

Officials have said they expect the current third phase to be the final stage of the food programme.

However, with so much economic uncertainty in the country, Mr Smith said he hopes the government will consider extending the programme at least until September.

Speaking to The Tribune yesterday, Mr Smith said the task force is now helping some 18,000 households, with an estimated 72,000 people receiving food packages or food vouchers.

The task force, which was established by the government last June, is tasked with delivering emergency food assistance to those most vulnerable during the coronavirus pandemic.

Initially, the programme was to end on August 31 last year, but was extended several times to assist people still widely affected by the COVID-19 pandemic.

Only those who have been verified and considered most vulnerable are eligible to receive the weekly assistance.

“So, the support has been great. In the final phase, we reduced our numbers by 60 percent or just over 60 percent from when we were feeding 55,000 families or 220,000 individuals (in the first phase).

“For phase three, that has been reduced to 18,000 families or 72,000 individuals. So going forward, we believed that number we reduced it to was probably less than it should’ve been.”

Even now, Mr Smith said there are many instances where those not included on the food distribution list have reached out to the organisation for food help.

“Some of the persons we took off the list should’ve probably still been on,” he added. “I was not involved in that process but definitely those on the list are the unemployed… but it is my belief that we would have not captured everyone when we came to that 18,000 so that would’ve been about 20 percent (from the initial number) that we’re now feeding.

“Because a lot of persons are still coming but they’re just not on our list… but we still do our best to assist and we have been able to assist quite a bit of them but it’s always a challenge. You know you have to eat to live and there are some people who are truly challenged.”

He also said the organizations that are a part of the task force are now preparing to launch advertising campaigns to get donations once the initiative ends.

“It is my estimation that there are one hundred to one hundred and twenty thousand persons who are still in need of food,” he said. “(When the programme ends), that is going to be quite complicated because that’s a pretty big number so I’m hoping that the government finds some way of extending their programme beyond March because when you talk about one hundred persons, that’s quite a bit of people.

“I expect that to happen in two to three weeks.”

The worst kind of animal instincts kick in when one is faced with starvation and/or a lack of drinking water.

Yet, can buy wendys, mcdonalds, conch snack and chicken snack on a dime. the government has failed in implementing strategies to teach the population about financial responsibility. You can't eat expensive bags, expensive shoes , clothes , jewelry and rims. Valentine's day is almost here , and how many girls expect chocolates, flowers, underwear. jewelry , and money without even thinking about food or water? Our priorities are all mixed up. I am not saying that people can't do what they want with their money, but when you do, do it responsibly. The rest of the society cannot keep carrying the burden. I am also not talking about people whim truly need help. Social Services needs to earn their keep and actually do something between Monday and Friday besides focusing on salaries . Little children need to be taught about savings regardless if it is $.25. They need to be taught to make responsible decisions based on logic and not emotion. How many of us get caught up in Christmas Emotion? It is a bad time in our country and the world. We must look out for each other.

True but the general mindset has been and still is that 'we look at each other' instead of 'we look out for each other'.

Yup ... while NOBODY would deny help to those truly in need, the numbers here indicate that 1/3 to 1/4 of Bahamians are now relying at least in part on free food handouts.

Knowing the mindset, it’s not hard to imagine that right becoming ingrained, along with the notion that you no longer have to pay those water and power bills, or credit card bills or car loans, etc. It’s all free now, thanks to Covid.

But we don’t notice any shortage of the latest high-fashion clothing, shoes, hairdos, makeup and jewelry — or, most especially, the latest cell-phone gadgets. Sad.

While I concur with you about the issue of priorities, I disagree on whose role that is.

It is not the governments job to teach people priorities. That is the role of parents.

Now governments should seek to partners with the home. However, you cannot put on government what is the role of parents.

The parents are children themselves. The educational system failed them. Now the government must break the cycle.

Exactly ! The parents themselves don't understand financial priorities, and their children then unintentionally learn the same habits. Basic finance classes should be taught in all high schools.

I agree, it starts in the home. However, that is not our reality in the Bahamas. The government needs to see where we fall down , and implement stratergies for its people. Wr all know that the traditional father, mother and children is non existent.

Would enlighten to better understand the feeding network's challenges if director Comrade Phillip, would speak to the geographical breakdown of the area of the 18,000 households, with the estimated 72,000 people receiving food packages or food vouchers.
How the ever, with so much economic uncertainty across the colony, why is the government paying $10,000 each and every month to some landlord for a building has sat completely empty on Parliament Street, whilst the feeding network is left cash strapped? Shakehead a quick once for Upyeahvote, twice for Not?

All you overfed fat, pompous, people degrading poor people for not living up to your standards is really sickening!

Actually, I can't afford to live up to a standard of the latest Apple iphone, Gucci sunglasses, land Bag etc, because i can't afford to buy them. i am not going to buy them and let the landlord put me out, let BEC turn my electricity off, water and Sewerage turn my water off etc. it has more to do with a an entitled mindset than the have's and have's not. None of these comments are degrading anyone. We all fall on hard times , and we all will need help at some point in life. That does not rule out making a better financial decision when a decision needs to be made.