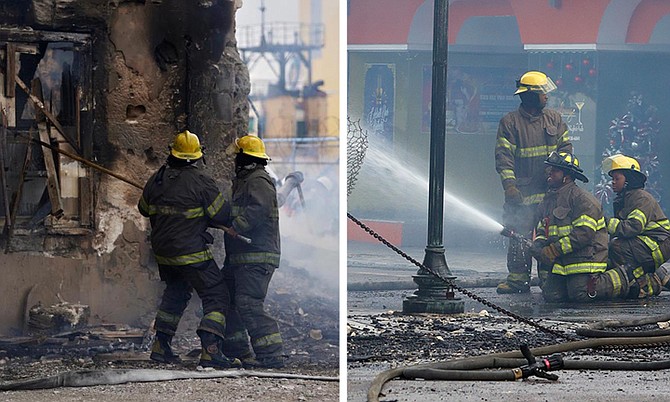 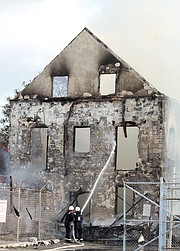 AN abandoned two-storey building on Bay Street was engulfed in flames Friday afternoon, destroying the structure.

Kenneth Morris, the Officer in Charge of the Fire Department, said the fire at the building, which is near Government Publications, did not damage nearby structures.

“Sometime around 3:26pm the fire department received a call of a building fire on Bay Street,” he told reporters. “As a result of this call, the fire department responded with three fire appliers (and) eight officers where we met a two-storey stone structure engulfed in flames. The fire was attacked, controlled and later extinguished, resulting to damages to that building only.”

Mr Morris said he couldn’t comment on whether a body was at the structure and police spokesman Assistant Superintendent Audley Peters later said reports that human remains were found at the site were unfounded.

THIS IS IT! THE END IS HERE!

Wow I just saw this and I thought the exact same thing!

Darrold Miller only shows up when such fires are, to use his words, "a biggie".

Quick! Get a bucket!

Body or human remains found inside

Oh this is that building before Elizabeth(?) Ave. Very beautiful.. rustic... at least it was

A beautiful old building. Sad that the owners allowed it to deteriorate to such a run down condition. Where is our Bahamian pride? The whole of Bay Street looking pretty grim these days.

Over The Hill they're quick to be seen as Abandoned Slum Buildings.
On Bay Street, they're referred to as Heritage Buildings. They're even given exclusive membership in the colony's Heritage Building Society.
I think sight is like that amongst the different classes. You look you see only what you want to see. Shakehead a quick once for Upyeahvote cannot just be making such nonsense up, twice No.

actually I like the look of those old buildings. Was just driving through bain town yesterday diverted from bay st for what was apparently this incident and was admiring one of the wooden houses on the 3'(?) blocks, very very beautiful. The house looked like it was abandoned but who knows. Our elders had some sense, probably built with flooding in mind. but we is just throw old things away... like they have no value... literally

And the public could never guess, but certainly should know, and would be most surprised to learn, just who is the prinicipal beneficial owner of this now fired destroyed two-storey building. LOL

Rest assured the likes of Ed Fields and Charles Klonaris are dusting off their blow horns and will soon be heard from. LMAO

Sad that this building was destroyed but if I remember correctly there were complaints in the past about letting the Eastern end of Bay Street full to dereliction. I think both ends of Bay should be to the same standards. On another note, why are the photos not published in gallery view? This is a poor layout of this story with text staggered in the middle, photos on both sides and having to click back to view each photo is taboo in online publishing!

The burnt out building should immediately fully demolished and be brought to the ground. The building after the intense heat and water soaked and having support timbers, roof destroyed inside, roof etc would have structure enormously weakened. Given the building is on Bay Street the constant heavy traffic lorries, jitneys, main traffic route would vibrate the weakened structure and collaspe and not injure anyone.

Last line should be..."...and collaspe and hopefully not injure anyone."

This burnt out structure needs to be immediately attended to for the safety of all.

Okay, so now we can create a bus-station there for those annoyingly parked jitneys? Something nice with a snackbar , some seats, some shade and clearly indicated waiting lanes for the different jitneys.

It pains me to see our countries firefighters fighting fires with no breathing gear on. Two firefighters seen in the videos jumped of with breathing apparatus.Either firefighters are not following their department procedures or the fire department is not well supplied. Whatever the case is stop taking chances. You have no idea what you're inhaling. Cancer is the number 1 killer of firefighters around the world. Firefighters have a 9% higher risk of being diagnosed with cancer. It will catch up with you in the long run.

It pains me to see our country's firefighters fighting fires with no breathing gear on. Two firefighters seen in the videos jumped of with breathing apparatus.Either firefighters are not following their department procedures or the fire department is not well supplied. Whatever the case is stop taking chances. You have no idea what you're inhaling. Cancer is the number 1 killer of firefighters around the world. Firefighters have a 9% higher risk of being diagnosed with cancer. It will catch up with you in the long run.