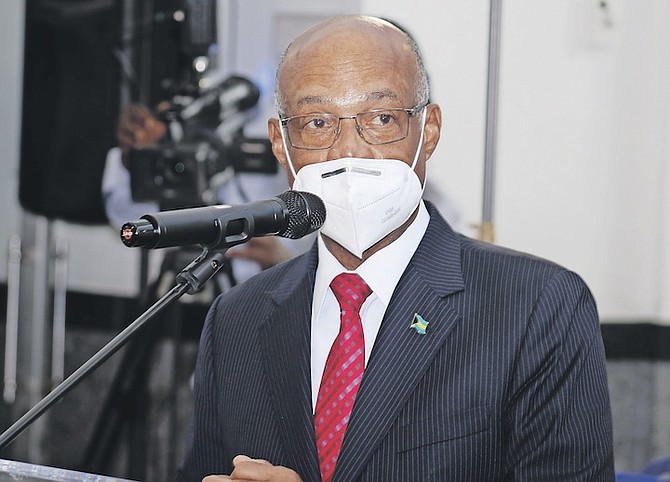 EDUCATION Minister Jeff Lloyd said yesterday it is likely this year’s national examinations will be held later than usual as a result of the ongoing COVID-19 pandemic.

Speaking to reporters, the minister said education officials continue to be engaged in discussions with Cambridge evaluators and assessors to finalise the dates for the examinations.

This comes after the 2020 GLAT, BJC and BGCSE exams were postponed several times last year in response to the pandemic that resulted in the closure of schools across the country.

Given the late commencements of the 2020 exams among other things, Mr Lloyd said it is only “natural” that officials give some consideration to pushing back the tests for this year.

He said a final decision will be made soon, at which point the public will then be informed.

“I expect within a week or so that there would be a definitive statement by the Ministry of Education as to the firm dates for the conduct of the BJC and the BGCSE exams and the GLAT,” Mr Lloyd said.

“I know that right now the ministry’s testing and evaluation department have been meeting with Cambridge assessment. I have also had a meeting with them and they are also further engaging the stakeholders, meaning our teachers and our educators by way of their advocates, the unions, to firm up precisely the dates for the conduct of these exams.”

He added: “As you would expect, it is likely that those exams will start later in 2021 than in the (years) before for obvious reasons – the pandemic, the exams last year were conducted late and as a result, it would be natural for us to have some consideration towards pushing back the exams to start at a week, two weeks, three weeks later date.”

With the resumption of face-to-face learning in schools in New Providence, Abaco, Eleuthera and Exuma still expected sometime next month, the minister also said officials would like to utilise the time to help students better prepare for the exams.

He said: “As you know we are going to begin the return of face-to-face instructions on New Providence, Abaco, Exuma and Eleuthera and we will like to exhaust as much face-to face time with our students on those islands as we could.

“Our anticipation is sometime in next month, we would start those (instructions) and then we would want those students in those islands to really have the benefit of a month or two months of real face-to-face so that they could really catch up and get settled into the routine of attending a physical school unlike which many of them have been doing since October of last year, which was the virtual school.”

The ministry’s decision to hold the exams last year received much pushback from parents and the Bahamas Union of Teachers, which recommended that officials cancel the exams and use forecasted grades instead.

Asked yesterday to respond to critics who feel the same way about this year’s examinations, Mr Lloyd replied: “I don’t have anything to say to those persons.”

“They deserve the opportunity to receive the credentials that many desire for the work that they have put in over their preceding ‘X’ number of years, nine years in the case of the BJC/BGCSEs.”

He also said: “…How unfair would it be for the Ministry of Education to deny those students that opportunity. Our commitment is the access to quality education. Each year, hundreds of students, though registered, do not avail themselves of the exams for various reasons.

“Should we then cancel the exams because there is a percentage of students that are not interested? I don’t think so. What about the majority of those who want an exam, who need an exam and we the ministry must surrender to the critics who cannot seem to be interested in what is valuable, necessary and beneficial to those students? I think not.”

Data released by the Ministry of Education in December showed that national exam results worsened in 2020 compared with 2019, with fewer students achieving A, B and C grades and more students receiving D, E, F and G grades compared with the year before.

Education officials have since defended the 2020 results, insisting the tests were a “success and remarkable accomplishment” despite the challenges of COVID-19.

No money, no resources, no education. Soon no electricity, no food, no life. Can't get any simpler than that. Thank you Minnis!