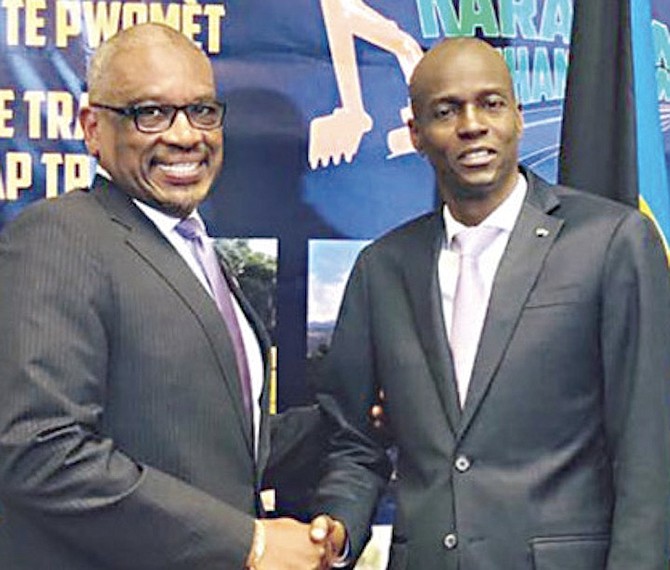 PRIME Minister Dr Hubert Minnis pictured previously with Haiti President Jovenel Moise, who has been assassinated at his home. The Bahamas embassy in Haiti has been ordered closed in the wake of the killing.

THE Bahamas has closed its embassy in Haiti and will beef up border security at home as precautionary measures after Haitian President Jovenel Moise was assassinated at his home yesterday.

“In any event, we were operating sparsely because of the pandemic,” he said.

Haiti’s First Lady Martine Moise was hospitalised after she was shot in the overnight attack. The Haitian President had ruled by decree for more than two years after the country failed to hold elections and the opposition demanded he step down in recent months, contributing to a precarious political situation in the country.

“They are following instructions of authorities to remain indoors and it’s calm in Haiti at the moment, but we don’t know what will take place later as the shock of this event wears off,” he said.

“We are very cautious about how (to) treat this situation. Any civil disruption in Haiti has a tendency to impact negatively on The Bahamas because of our nearness geographically. We are going to beef up security on the borders to keep our borders safe.

“Any Bahamian who is in Haiti – I’m advised it’s maybe five or six of them – they are advised to follow instructions of the authorities. We are assured by Haitian authorities that things are calm and under control.”

In a statement yesterday, Prime Minister Dr Hubert Minnis said the government is “deeply saddened” by the developments in Haiti and “strongly condemns the actions of the perpetrators”.

He said: “This morning, we awoke to the very sad and disturbing news of the death of Jovenel Moise, the President of the Republic of Haiti, who was killed at his residence at about 1am today, Wednesday, 7 July 2021.

“The Heads of Government of CARICOM at its 42nd meeting, which concluded on 6 July 2021, discussed the ongoing situation in Haiti and offered its assistance in finding a peaceful resolution to the political crises.

“I have been in contact with the Honourable Gaston Browne, Prime Minister of Antigua and Barbuda, chairman of the Conference of Heads of Government of the Caribbean Community.

“The Ministry of Foreign Affairs remains in contact with our embassy in Haiti. All staff are safe. The embassy is monitoring the situation.

“We pray for the people of Haiti and for a peaceful resolution to the political crises.”

“We are shocked by this heinous act of violence and offer to the government and people of Haiti our prayers and support during this difficult time,” he said.

According to the Associated Press, Bocchit Edmond, the Haitian ambassador to the United States, said the attack “was carried out by foreign mercenaries and professional killers — well-orchestrated.”

He also said they were masquerading as agents of the US Drug Enforcement Administration, which has an office in the Haitian capital to assist the government in counternarcotics programmes.

Voters must keep in mind that both Minnis and Davis lead political parties that have for decades failed the Bahamian people by not protecting our borders and allowing, even encouraging, the Haitianization of The Bahamas.

To hear Minnis now talking about the need to "beef up" border security is truly laughable. He will undoubtedly be calling for us taxpayers to foot a hefty bill to fortify his residence.

Perhaps he will call former President Trump to get advice on the building of an unassailable and impenetrable wall around his home.

What is more shocking than what Tribanon wrote are the disassociative position both PM Minnis and Leader of The Opposition (LOP) Philip "Brave" Davis took in the stance against democracy.

FIRST NOTE What those assassins did was despicable wither (a) foreign planned or (b) locally contracted, but it was an ingenious mastermind to bring an end to the problem, but didn't resolve the situation, or did it? It seems too strategic that it's origination was locally contracted.

HAITI FROM THE DEPTHS OF AFRICA'S REBELLIOUS TRIBES INDUCED INTO SLAVERY WAS NOT A GOOD IDEA AS DISCOVERED BY FRANCE Haitians has a justice melting point (JMP) and on their homeland when it does people die, France this all to well. Furthermore Haitians and those of Haitian descent should recognized that such a characteristic is model signed of patronage in their homeland and home soil of Haiti. What Haiti does to their leaders is much the same way as who or why Haitians elect as their leader the persons they have! It is Haiti's and Haitians choice! But one thing we as "Caribs" know as a fact that Haiti was the 1st to usher in emancipation and others followed.

HAITI SET THE EXAMPLE, NOW WILL EVIL SLAVEMASTERS TRY TO PUNISH THEM IN CLASSICAL SLAVE MENTALITY IN ORDER TO SET AN EXAMPLE THAT OTHERS DONT REPEAT OR THINK OF REPEATING THE SAME? It behoofs us all to think that these other leaders are not addressing the pink elephant in the room. Remember in the USA, Former President (#45) Donald Trump (Republican) apparently seemed like he would not leave the house of power but that was after an election in which he lost; whether fairly or unfairly, The people had spoken. Nonchalantly; US Former President (#44) Barack Obama made reference to a clause in the US Constitution that reference such a thing if it occurred what would happen. That is the Navy (seal team 666* ) would enter into white house and remove the former President. Reasons illustrates that the President of The USA is the commander of the military forces their command comes from the President and their can only be 1 president at a time. It is a beautiful constitution that is well constructed and easily amended or ratified, but it covers any possible incident possibly imaginable for now. On the other hand Haiti's Constitution seemed very much more vulnerable and prone to manipulation. Remember "for evil and injustice to exist, it takes good men to do nothing or turn a deaf ear or a blind eye". I firmly believe that no one should have the right to determine Haiti's future except The Haitians. But as history denotes, Haiti leads by example & hopefully other Caribbean leaders respect their Electorate, the Voters and the Nation to not be so blatant to think that the days of Physical Slavery (PHS) have given ways to Mental Slavery (MES), Psychological Slavery (PSS), Economic & Financial Slavery (EFS). Colonialism vs. Freedom and all men are created equal, just can not subdue the masses anymore & shouldn't!

Need to beef up border patrol? Security at what is supposed to be the most secure compound in this Bahamas was breeched and the life of a marine was taken and others threatened and no one knows who done it and those who know are not saying. EIGHT BAHAMIANS were shot, SIX ASSASSINATED in broad daylight on the busy streets of the capital of This Bahamas and no one knows who done it, or those who know are not saying. So why act surprised about what happened in Haiti. Y'all ain't serious. And guess what? Sometimes these type assassinations happen, not because the perpetrators have beef with the victim(s). The intent is the type of waves and repercussions that will be created, Be it social, religious, political or otherwise. Mass panic, social disorder, and upheavals or just the view the world will now have on that country and its citizens.

Precisely state on what reality morning was the crown's Foreign Affairs Minister Comrade Darren Henfield, awakes to...Exactly, what non-existent Haitian authorities are not even in a place of governance that could reassure 'em's that things are calm and under control in Haiti?
The same now assassinated president to which he and his red colleagues had propped stay in office, beyond his constitutional mandate, yes?

The reason why the assassination of the president may have been successful is because some responsible for the president’s security were duped into cooperating with the killers. They were told that agents were coming to arrest the president, not to assassinate him or try kill his wife. So they let their guards down and allowed the killers access. Amongst evidence recovered from some of the suspects was a cap with ‘DEA’ on i it, Live ammunition and a stash of weapons. President Biden has thus far declined Haiti’s request to send in US troops to help maintain law and order.

Haiti has become a major drug transshipment country over the past few years and if the president tried to crackdown on it… then this.