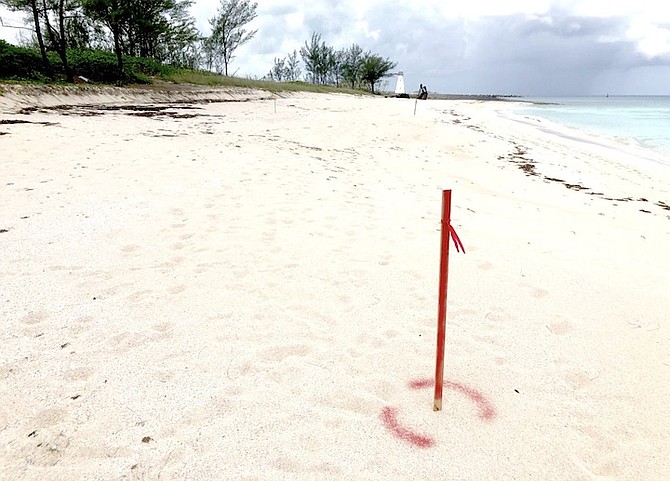 A SURVEY stick marking on the beach side of the Paradise Island lighthouse parcel of crown land.

A Bahamian entrepreneur yesterday hit out at Royal Caribbean after the cruise giant declined to “acknowledge” his Paradise Island crown land lease that is now locked in a legal battle with the government.

Toby Smith, principal of Paradise Island Lighthouse & Beach Club Company, told Tribune Business it was “very disingenuous” for the cruise line to have drawn him into reconciliation talks to see if their projects can co-exist only to then revert to its original position that his dispute with the Minnis administration has nothing to do with its ambitions.

Having handed over a copy of his site plan to Royal Caribbean, he argued that the cruise line had “drawn me into conversation” only to turn around and “disregard” the land boundaries for what Mr Smith argues is his own validly binding and executed crown land lease.

The entrepreneur spoke out after Jay Schneider, a senior Royal Caribbean executive, informed him via a July 5 e-mail that the cruise giant is not taking a position on his lease and that he must instead resolve his differences with the Government.

“After reflecting on our conversation and discussing this issue with our attorneys, Royal Caribbean is not in a position to meet your request (acknowledging your lease),” Mr Schneider wrote. “We have not been privy to your conversations and negotiations with various governmental officials and therefore find it impossible to take a position, one way or the other.

“We do not wish to appear provocative or unreasonable, just the opposite. Our motivation is to continue to build on the more than 50 years Royal Caribbean has supported The Bahamas and Bahamian businesses.”

Mr Smith, though, told Mr Schneider that he had only provided the site plan attached to his lease “based on your reassurance you wished to be able to see what a scaled down version would look like for Royal Caribbean”.

Speaking to Tribune Business yesterday, he said: “Royal Caribbean called the meeting for reconciliation talks. They asked me for a copy of my site plan contained in my crown land lease agreement on the auspices of understanding my boundaries so that they could run a 3D model with a reduced footprint to honour my parcel.

“They later responded that they were not prepared to scale back on their development, and they wish to disregard my land boundaries contained in the lease. It is a very disingenuous move to draw me into reconciliation only to draw me into conversation to obtain my site plan.”

Mr Smith said he had been further alarmed to discover that, between Sunday gone and the previous Monday, surveying sticks had been placed along the northern beach boundary of his Crown Land parcels, as identified on his site plan, even though the property is presently tied up in the Supreme Court litigation he initiated against the Government in a bid to force it to honour his lease.

The Government’s Department of Lands and Surveys, the entrepreneur said, had informed him it had no knowledge of any surveying being carried out in that area of Paradise Island.

“I think it’s very disingenuous of the Government to continue to negotiate with Royal Caribbean over a matter that is before the Supreme Court,” he added. “As a Bahamian, I am tired of these backroom deals being done with foreign interests, with the Government stomping on Bahamians who put them in office.

“Minnis, who wishes to announce anything positive so that his government can take the credit, sits quiet as a mouse in the backroom. I feel as though he is continuing to shun Bahamians. I’ve asked him for a meeting in writing, he’s ignored me in favour of foreign interests for Bahamian Crown Land yet again.”

Mr Smith contrasted the Government’s position with that of the Opposition, whose leader, Philip Davis, has promised to cancel any Paradise Island Crown Land lease involving Royal Caribbean should it be elected to office at the upcoming general election.

Royal Caribbean has steadily amassed around 13.5 acres on Paradise Island’s western end by buying out private landowners in the area, but it is also seeking to lease some ten acres of crown land in the Colonial Beach area to complete its Royal Beach Club development as part of a total $110m investment billed as creating $26m in annual local spend and 200 full-time jobs.

This has brought it into potential conflict with Mr Smith, who is seeking himself to lease two crown land parcels at Paradise Island’s western end, one of which involves two acres around the lighthouse and another three acres for the “beach break” element of his own $2m project. Two of the acres sought by Mr Smith are included in Royal Caribbean’s Crown Land lease.

Mr Smith’s court action is alleging that he was granted a valid crown land lease over both parcels, including the lighthouse and the area at Colonial Beach for his “beach break” destination, which is now legally binding. The case is based on a January 7, 2020, letter from Richard Hardy, acting director of Lands and Surveys, that was headlined “approval for crown land lease” over the two tracts he wanted.

Russell Benford, Royal Caribbean’s vice-president of government relations for the Americas, in response to Tribune Business inquiries previously confirmed: “Pursuant to the January 2, 2020, letter of agreement received from the Government of the Bahamas, Royal Caribbean has received the executed Crown Land lease and seabed lease associated with the Royal Beach Club project on Paradise Island.

“As steps in the project approval process continue, we will engage and work with local interests on business opportunities as the project moves forward.” Mr Smith, though, at the time suggested that the Government’s actions had effectively disrupted and overturned efforts by himself and Royal Caribbean to achieve common ground.

Ugly red paint markin' out where a stake is being driven for a sign be posted, warning all natives, more so Comrade Tobby, Do Not Crossover, Beyond This Private Beach Stake, yes?

Mr Smith contrasted the Government’s position with that of the Opposition, whose leader, Philip Davis, has promised to cancel any Paradise Island Crown Land lease involving Royal Caribbean should it be elected to office at the upcoming general election.

Mr Smith, without excusing the government’s disingenuous behavior, you should be careful of getting in bed with Brave and Co, to sup with the devil you need a long spoon. As we Bahamians say mout could say anything, money buy land. Once the cruise industry money going in another set of pockets you might be dismayed at the results.

How could you possibly want the Govt of the Bahamas to give the people's crown land for free to someone (Bahamian or not) instead of leasing it for millions to who can afford it and bring in millions for the Bahamas. He gats to be jokin

As many people have learned to their detriment, trying to fight The Government is like pissing into the wind. The only one to get wet is yourself!