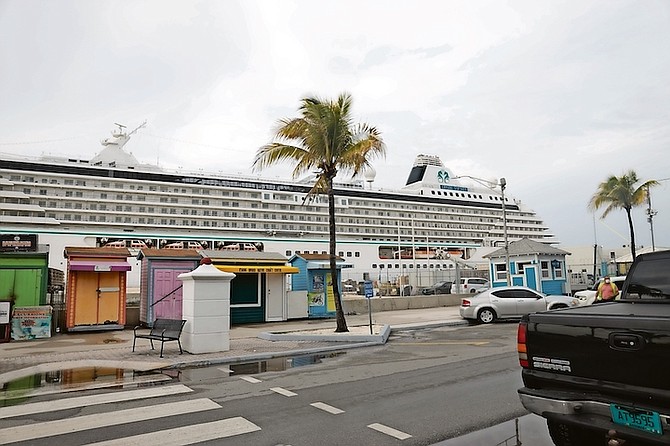 Nassau Cruise Port’s top executive yesterday said it could welcome one million visitors over the five months to year-end 2021 even if vessels call with just 60 percent average occupancy.

Michael Maura told Tribune Business there is a “lot more activity on the horizon” at Prince George Wharf with a total 520 cruise ship visits scheduled between August 1 and year-end as the industry “ramps up” its return to the seas following a 15-month COVID-enforced absence.

He said the cruise lines had indicated that as they become “more confident” in their health protocols and virus-testing regimes, on-board occupancy levels will steadily increase from the present 30 percent throughout the remainder of 2021 until 100 percent is achieved before 2022 is reached.

Pointing to the greater economic impact that increased passenger numbers will have for Bahamian industries and employees reliant on the cruise industry for their livelihoods, Mr Maura confirmed that “the number of ships forecast to berth” in Nassau during the final five months of 2021 presently stands at 520.

“If the 520 vessels kept occupancy at 30 percent, we would receive just over 500,000 passengers, but if they averaged 60 percent through the year-end we would welcome one million passengers over the remaining five months of 2021.”

The latter target would match the one million stopover visitor ambition that Dionisio D’Aguilar, minister of tourism and aviation, has set for the 2021 full-year, along with the goal of returning the tourism industry to 80 percent of pre-COVID capacity by the 2022 first quarter.

“We definitely have a lot more activity on the horizon this year,” Mr Maura said, which includes Royal Caribbean’s and Crystal Cruises’ respective home porting initiatives. “We have regular conversations, my team and I, with Disney, Mediterranean Shipping Company (MSC), Royal Caribbean, Carnival and Norwegian.

“We’re talking to these cruise lines every day. Today, when we spoke to Disney, they said they will start their cruises to The Bahamas during the first week of August. We will also have MSC ramping up, we’ll have Carnival starting up. On August 6 we expect Carnival’s new ship, the Mardi Gras, which they have highlighted as a business first because it is a liquefied natural gas (LNG) cruise ship.

“Royal is continuing to pile the ships on us. Norwegian Cruise Line will not start as fast as the other lines, but we expect to see them around October this year. The business is solid, and we are able to manage it through our construction and various pier works.”

Mr Maura said dredging around the northernmost pier extension, which will accommodate the world’s largest cruise ships, is due to begin the week after next as part of Prince George Wharf’s $250m redevelopment. Dredging on the eastern end of two other berths will also take place, with the move also re-opening the channels to nearby marinas used by visiting mega yachts.

“What we’re hearing on passenger volumes on these vessels is that as the cruise lines are sailing, and becoming more confident with their health protocols and testing regimes, they will be organising to build occupancy on their ships,” he reaffirmed.

“While we started with 30 percent with Royal, which is most of the business today, you will find that it will climb very quickly to the 75 percent level and then, at year-end, reach to 100 percent occupancy. They are forecasting with a high degree of confidence that by the end of the year they’ll be at 100 percent.

“They’re telling me that as recently as last week. That objective has been pretty consistent over the last couple of months. That’s very good from an economic perspective and Bay Street perspective. Our retail business volumes downtown are still light. We are seeing tourists walking down Bay Street but we are still a ways off from the 2019 numbers that we so enjoyed.”

Mr Maura, meanwhile, praised the Government for taking “the responsible action” in removing the requirement for cruise passengers sailing from Florida to first purchase and be approved for a health travel visa. He explained that its purchase, and that of the insurance that comes with it, was unnecessary because the cruise lines were dealing with all COVID issues and associated costs that arose on-board.

“Our reality is that we are not the only country that these cruise lines include in their itinerary,” the Nassau Cruise Port chief explained. “While we may have persons that feel why do I as a Bahamian, Michael Maura for example, have to complete a health visa when coming home and a foreign visitor on a ship does not, if Michael Maura as a Bahamian wants to take a cruise and has to pay for a health visa for every country he has to visit in that itinerary, I’d likely not take that cruise because it’s cost prohibitive.

“We need these tourists to come and visit The Bahamas. I think it’s a responsible action that has been taken, and it does not pose a risk to us. Over 90 percent of visitors coming by way of cruise have been vaccinated.”

Mr Maura said Nassau Cruise Port had worked with the Nassau Airport Development Company (NAD), Baha Mar, British Colonial Hilton and tour operators and taxi drivers to “work out a lot of the kinks and the bugs in the process” of home porting.

He added that Royal Caribbean, in particular, had praised its home porting experience to-date and “shared a comment that it’s easier to do business in The Bahamas. It’s really nice to hear that on the maritime side of things, and Royal felt we did it extremely well”.