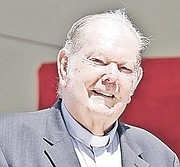 TRIBUTES have poured in for former Queen’s College principal and president of The Bahamas Conference of the Methodist Church Reverend Charles Sweeting, who died last week.

In a statement released yesterday, Prime Minister Dr Hubert Minnis expressed sadness over the reverend’s death and heralded him as a man of “enormous integrity”.

“Rev Sweeting was an exemplary man of faith, which was evidenced in his commitment to the spiritual, educational and social development of The Bahamas,” Dr Minnis noted.

“It is with gratitude that even as we mourn his passage, we celebrate his legacy and tremendous contributions to national life.”

In another post yesterday, Queen’s College remembered the reverend as a “gentle giant”.

“Flags fly at half mast today (Tuesday) at Queen’s College in memory of the late Rev Charles A Sweeting, former principal. His contributions to education, the Methodist Church and this nation have been many. He was a ‘gentle giant’. He has fought a good fight, he has finished the race. Well done, good and faithful servant,” the post read.

More tributes came from Andrea U Gibson, who served as principal of Queen’s College from 1997-2019.

“Rev Sweeting had the distinct honour and privilege not afforded to any other Methodist; that of serving as the head of two of his church schools – St Paul’s College in Freeport, Grand Bahama and Queen’s College in Nassau, and also as president of The Bahamas Conference of the Methodist Church,” Ms Gibson said in a statement. “As such, he was both progressive, and unafraid, of trailing paths in the history of the two schools and of the newly formed Bahamas Conference.

“I was told that, a few days before his passing, Rev Sweeting shared with one of his visitors how he had, against the odds, taken on the task of growing St Paul’s Methodist College from a primary school to a fully-fledged K-12 school and, in the process, brought about the Bahamianisation of that school.

“In later years, as president of The Bahamas Conference of the Methodist Church, he took the bold step of installing the first female, and first person of colour, as principal of Queen’s College. Despite the naysayers, Rev Sweeting was confident that the leadership team he had put in place would effectively lead the next phase of Queen’s College’s growth and development.”

She said during his time as QC principal, he worked “to lay a firm foundation that enabled successive leadership teams to build upon the school’s legendary past”.

She noted that Rev Sweeting, a former head boy, teacher, and first Bahamian and alumni principal, was the first person to be inducted into QC’s Hall of Fame in 2003.

He was also the first QC principal to have a landmark on the campus named in his honour in 2014, she said.

“Rev Sweeting’s contributions to his beloved Queen’s College, will long be remembered in the minds and hearts of all whose lives he influenced during his principalship and as chairman of the Queen’s College board of governors. May his soul rest in peace.”

Mr Davis explained Mr Sweeting was “a nation builder par excellence and his passing brings to an end a significant era in national leadership”.

“He is credited with leading much of the developments of the Methodist Church in The Bahamas while preparing a generation of Bahamians for leadership in practically every sphere of national life.

“We thank him for his stellar and selfless service to this country he clearly loved dearly - especially in the all important areas of education and religion,” Mr Davis said.

Rev Sweeting is survived by his wife, Sheran, his son Andrew and other relatives.

He look like one of those white men who used to build and set up missionaries to brain wash black indigenous people during slavery. Dem same set who used to change ya name an ting. I don't see what yall see. Religion hasn't made black people a better people, not baptise, catholic, Anglican, Methodist, Lutheran, none of dem! Bahamians aint "better off" because of no religion or faith! We doing what this man anscestors MADE us do! We still killing each other, we still don't have adequate education level to compete with the world, we still bringing all our money to the church making the pastors rich while we live in poverty, we still believe praying will change something without action behind it. Bahamas should be one of the wealthiest nations based on the amount of churches we have. It's thousands of them on carmichael road alone! Yall aint never ask where all that money does go specially when church get year round consessions like, duty free, vat free! How come our communities ain't improving? How come the lives of people who go to church aint improving? Once you get someone to BELIEVE something, you could give them stale bread and tell them thats the freshest bread ever and they will accept that as gospel! Shit crazy to me......

It matters what he did not how he looks. He was a man that dedicated his life to trying to do good.

lol still blaming whitey for all your problems?

... as a black Bahamian I know that Sweeting did more good for people by accident than your post, and possibly your life ,has done intentionally!

Churches are like schools, its up to the person who gets the information to apply it! May times the problem is not the teacher, but the students!

@stislez,You obviously never met Reverend Sweeting because your level of intellect and attitude would certainly have benefited if you had. You shame all Bahamians, particularly black Bahamians, with your ignorant and bigoted remarks.

Reverend Sweeting was a giant pillar of faith in our community who tirelessly devoted himself to the betterment of our nation and its people. He was by every measure a truly remarkable Bahamian. His family will be comforted in knowing he was well loved by so many and is now resting in peace.