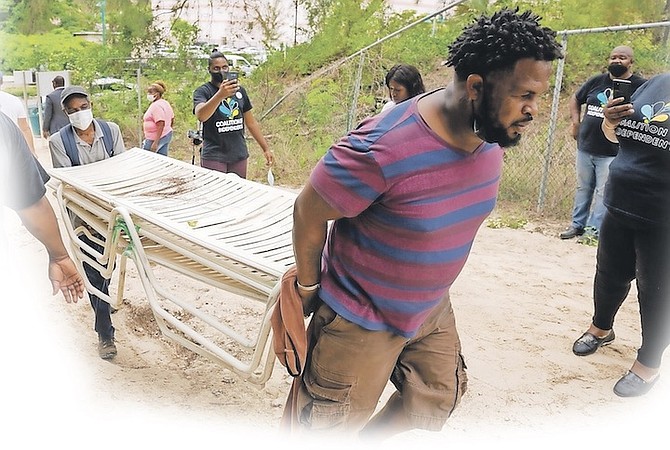 THE toughest political issues – the ones that wake a sleepy village and thrust it into frenzied activity or turn the somnambulant into the firebrand – are those that impact our own backyard.

Not a political activist? Watch what you become when news that a halfway house for serious sex offenders is about to be built on your street. Don’t care about climate change, figuring they’ll fix it if it gets bad? Watch what happens when your street floods.

Backyard issues are so volatile they can determine the outcome of elections, particularly at a local level.

Even without true local government, there is no greater backyard issue in The Bahamas than beach access. When it comes to beaches, whose rights are right?

It hits all of us, those who own a piece and those who just want to use a piece. The question lingers unanswered, simmering underground, until every now and then, there is a new event, another gate erected, another access denied and the question whose right is it anyway flares up and boils over before it simmers back down and remains that way until the next time.

Whose beach is it anyway? Maybe it would not be so important if the waters were not so much a part of who and what we are. Maybe it wouldn’t hurt so much that we can’t just stop anywhere and go for a walk or swim if the sea were not so blue, so clear, so inviting and enticing.

Maybe it would not feel like we were being deprived of something we believed we had a right to even if some part of us understands that if that beach were our backyard we may not want strangers hanging out and having a family reunion on it.

But the beach is so close to our hearts, it feels like part of us and we a part of it. We drive by it and yet it is not ours, like a lover we used to have and still long for but can’t touch. A tease, a desire to lie on the warmth of the sand and splash in the cool of the deep. And we keep driving, longing.

Romanticism and emotion aside, the soft sand is a thorny issue.

From a scientific perspective, the reasoning is plausible. We are water beings. Our bodies are made up of 70 percent water. So is Earth. In The Bahamas, the percentage is even higher, (though Wikipedia has it wrong). We are roughly 5,300 square miles of land to 100,000 square miles of open ocean or 260,000 square miles of water if you include the exclusive economic zone which extends from the outer limits of internal waters up to 200 nautical miles outward. Our ancestors sailed the seas and lived on its bounty. Our deep connection to the water is historic and by extension, our connection to the shoreline is not mere fancy, it is ingrained as surely as our DNA.

All of which takes us full circle back to the question whose beach is it anyway?

If only the answer were clear. But it is not and may never be. Of a few things we are certain. The law favours private ownership rights on dry sand, public access rights on the wet sand, or what is referred to as above and below the mean high water mark.

In truth, there are more questions than answers which became apparent after Florida passed House bill 631 in 2018. Signed into law by Republican governor Rick Scott, it tilts in favour of private vs public by putting the responsibility on those seeking access to pursue through the courts instead of those who want to maintain privacy and it takes the power away from a local government to decide such matters, again placing the onus on that entity to establish reason.

The irony in that is that with all the money that goes into beach restoration in Florida, taxpayers may be denied access to a beach or may be arrested for trespassing on a beach their tax dollars helped to restore. About 60 percent of Florida’s beaches are privately owned and we can only surmise that in New Providence, the figure is even higher. In short, it awards “superior right to possession of real property” to those who hold the deed rather than those to whom history and habitation might favour.

Were it to be the case here, the vendors on Cabbage Beach would have no case to bring, but the political climate being what it is during these sensitive months, it would be surprising not to see some form of compromise and resolution.

While the solution is not an easy one where so much development has already occurred and investors have poured hundreds of millions into resorts where guests enjoy the beauty we often cannot get close to, it is not too late to save access in the Family Islands and on much of Grand Bahama. One Florida example stands out – after losing much of the south end of the city’s beaches to private development, the city of Boca Raton in Palm Beach County woke up and smelled the salt air. The entire northern length – some of the most expensive real estate in the southern US – is one public beach after another and all development is on the opposite side of A1A, the ocean road. Residents have the best of both worlds, a view and access, and that is a lesson we can learn before another gate closes and it is too late.

It’s rare to celebrate news that a licence expired but when the Minister of Environment & Housing Romauld Ferreira reported yesterday that licences held by Bahamas Petroleum Company, BPC, had expired and they owed fees to government dating back to 2017 it was hard not to punch the air with joy.

We thank our lucky stars that the initial drilling for oil did not turn up commercially viable quantities. Let’s do what we should have been doing all along, invest in solar, wind and carbon credits. We’ve been given a second chance. Maybe Sam Duncombe can call for a moment of a national sigh of relief. Let’s not waste the reprieve.