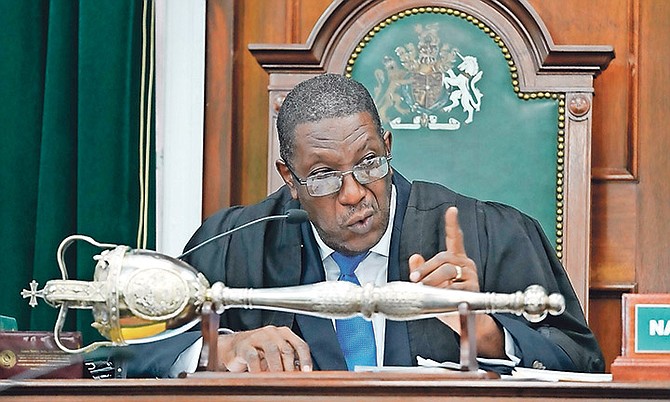 HOUSE Speaker Halson Moultrie committed a “clear and flagrant breach of the Constitution” when he submitted a report on Friday to Governor General C A Smith that contained only his signature and no one else’s from the Constituencies Commission, committee member Marco City MP Michael Pintard said in a statement.

“No other member signed off on the report and it does not represent what the majority of the commission’s members agreed to,” Mr Pintard said.

Mr Pintard noted that, according to Article 69(3) of the Constitution, any decision of the commission requires agreement from no fewer than three members.

“Pursuant to Article 70(3),” he said, “when the commission intends to submit a report to the Governor General, it must (first) give written notice of the intention to the Prime Minister, who shall publish that notice in the Gazette.

“The action of the Speaker does not comply with any of these fundamental provisions of the Constitution and is a blatant disregard for legality and for the constitutional order of the Commonwealth of The Bahamas.”

Mr Pintard said: “What was clear from the beginning of this process, which began last September, is that the Speaker of the House was intent on having his own way and doing his own thing.

“The Speaker announced a meeting to sign the report, which was not properly constituted, and there was not a quorum. The member for Exuma indicated via email that he was in his constituency and not available for the meeting. No other member of the commission responded to the email or attended the meeting.

“The Speaker submitting a report to the Governor General signed only by him is grandstanding and political posturing. It marks a low point in the history of our democracy.”

Speaker Moultrie’s term has come to be defined by controversy and this is only the latest indication of this. He quit the Free National Movement in February this year to serve as an independent Speaker.

According to the unsigned report, a copy of which The Tribune obtained yesterday, most members of the committee opted not to recommend that constituency boundaries be changed to adjust the current number of 39 constituencies.

Speaker Moultrie and Mr Cooper disagreed with the majority, according to the report. However, Mr Cooper’s opposing view was not included in the report, which said his view was “not received at time of printing.” The report nonetheless said Mr Cooper had concern about the “purity and accuracy of the permanent voters register with respect to the purging of deceased persons; and the number of missing persons not yet presumed dead as a result of the impact of Hurricane Dorian on the five constituencies in Grand Bahama and the two constituencies in Great Abaco.”

In a statement yesterday, Speaker Moultrie said there is no constitutional requirement for signatures from “all” members of the committee.

Speaker Moultrie noted the report makes it clear that most members did not recommend changes to the boundaries.

He said the Constitution does not allow for dissenting voices to be silenced, “which was the goal motivating the majority and another bone of contention in several meetings.”

“Dissenting voices have a right to be heard. The stalemate came about because of the efforts of the majority to acquire all five signatures in spite of the dissenting voices, thereby giving the false impression that the decision of the commission was unanimous,” he said.

According to the report, information from the Parliamentary Registration Department showed there were 191,217 registered voters, including 132,443 on New Providence, 30,552 on Grand Bahama and 28222 in the Family Islands.

When will the country be rid of this clown?

The vote counting procedure will secure this election for the winner.

Can't be. That would make you a blithering idiot.

Would appear Halson has lost his mind....

Well first Halston would have to prove that he actually and truly had one to start off. Is this not the man that "blasphemed" about democracy. I think it is time that the Honorable HOA have members that re true to themselves and to the good intent of the Bahamian people first and foremost! If the facts are as in the media with media spin, shame shame on you Halston! May the Bahamian people forever remember your harassment, assault and rape of the Bahamas constitution and its laws.

Comparing the deepness the bravery of the Honourable House Speaker to that the fired trio's so lackn' balls, Messrs Dr Duane, KP and Brent, the comrade Speaker man's is worthy much respect plays a major role brung about a new political Popoulaces movement that is vital to aggressively launch a fight upon a rungin' bell to kickstart a general election campaign, yes?

@Tal, comrade you speaking in tongues again, twisted though it is. Moultrie has absolutely no credibility nor any understanding of the Office of The Speaker of The House. As Mark Twain once put it, “it is better to remain silent and be thought a fool than to talk and remove all doubt.” Moultrie of late only opens his mouth to change feet and you're in danger of emulating him.

It seems your argument or comparison is equivalent to a fortuitous response that Jack The Ripper, may have said if he was caught in todays time and age; that is "He raped the woman because her skirt as too short and therefore she will learn never to wear short skirt like that again, because of being raped! .

WHAT IS THE HOA SPEAKER DOING TO STAY IN POWER - UNDER THE TABLE COMPROMISING POSSIBLY?

Secondly; may you have thought that maybe Mr. Speaker was probably willing to compromise far more than the others were willing to, like they had too much morals, ethics or conscious ? Recall this is a game of political chess, played right before your eyes. Minnis survived the Lorretta Butler overthrow from the first time ever Lost of Power as Leader Of The Opposition. For those who may not have studied politics in the Bahamas; .

PM Hubert Minnis is a political Python, he needs to see the attacker or the attacker needs to be exposed and then (HAM) he can close the distance and attack squeezing and suffocating the attacker politically. The condition is referred to as #Jamonitis. 100% effective to date: Lorretta Butler-Turner, Perry Gladstone Christie. Some believe that Minnis practice the dark art of political voodoo aka "Vu Do". .

THE LORRETTA BUTLER BUTHERY: WIN THE BATTLE LOOSE THE WAR

Let's ask Lorretta R. Butler-Turner; former MP & former Leader of the Opposition in HOA 2012-2017 from Dec. 2016 until May 2017 what happened. The grand daughter of Milo Butler & from first becoming a HOA member in 2007 for Montagu constituency and then again as a member for Long Island constituency in 2012 she planned to repeat the same initially in the 2017 election for long island but for the first time in her political life as an Independent and not as a FNM in post-Jamonitis Era. Minnis strategically made minced meat by the pound of political pedigree Lorretta Butler in the 2017 election where she lost by double digit percentage points to the 2nd place vote getter who was a PLP candidate: Glendon Errington Rolle, & she was the incumbent for the LI constituency. She lost to the FNM candidate, Adrian Paul Gibson, by 38% points. LBT was political pedigree and Minnis made minced meat burger by the pound of her stripping her of her political pride and the hard work her grandfather had sacrifice for the Bahamas to ensure greater democracy, but she became a political outcast ironically, a political lucifer post expulsion of apparently the political helel aka "HAM" from heaven Minnis sold it that iniquity entered her heart & in reality that she was the dragon & her tale dragged down 6 other MP's. Lorretta butler disgracefully only got 252 of the 1461 votes casted in the Bahamas General Election 2017 constituency of Long Island. There Lorretta Butler-Turner was seen casted down & out of her political Heaven after being painted with political iniquity by Hubert Minnis skillfully.

But, Lorretta Butler-Turner was not the only fall from grace. Minnis squeezed and coiled PLP Leader and incumbent Prime Minister Perry Christie in the most despicable manner, by turning his base against him; his constituency and that was absolute political surgery at its finest. Calling a spade a spade and being completely objective! .

WHATS EXPECTED FROM THOSE WHO GO AGAINST HUBERT MINNIS

It is expected that any candidate and that is any candidate no matter ho successful under the FNM machinery, once they would have been spotted they will be coiled to political death and consumed and the list includes: (1.) 2017 Pineridge MP Frederick McAlpine, a former PLP at the core who was politically baptized an FNM by Hubert Alexander Ingraham aka HAI. Hubert Minnis is practicing the same surgery against Freddy McAlpine, the thing is he is not smart enough to recognize that he has been painted as the Deceiver, the Satan, and will undoubtedly fail and fall. The moment that McAlpine runs against an FNM Candidate he would have broken the FNM cardinal rule, created from the old days of Cain & Able, do not politically strike at your political brother in elections, he is out. Minnis will effectively illustrate that Freddy Mc is a Political Harlot but Freddy is caught between a rock and a hard stone and he will find that Jamonitis is easily contracted and more fatal than COVID-19 once you contract it. Bye-Bye Freddy. But maybe Freddie is trying to suck as much attention as possible like a "Political Attention Whore" and has no intention of running as an independent like Lorretta Butler-Turner did! Time will tell and show Freddy's Political IQ.

(4.) Halston Moultrie could be seen as nothing more than the commodity seller, or the African that would capture and sell his own people into slavery, this could be the deal of Minnis-Moultrie but Moultrie will sound find out that he is wrapped and coiled in Minnis grip, next to be eaten whole. Halston's political upbringings was a little like that of Freddy but the fate will be the same!