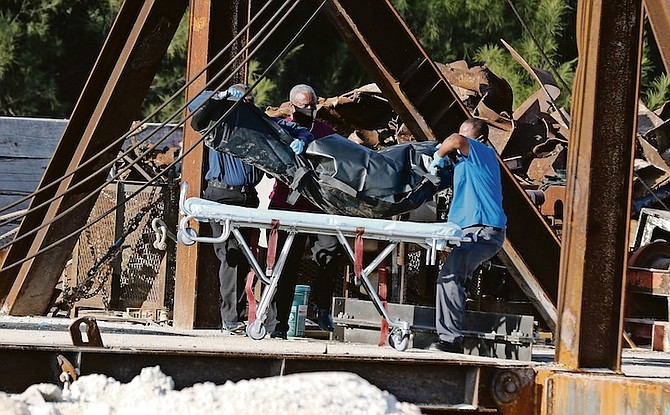 A body is taken from the scene at City Services Ltd yesterday after three men died. Photo: Vandyke Hepburn

THREE men died yesterday in an industrial accident in Freeport after possible chemical exposure while cleaning a tank filled with scrap metal.

A Bahamian, American and a Dominican were discovered unresponsive in a pit on a floating tank at City Services Ltd shortly after 4pm.

Although police are withholding the identities of the men, one of the deceased is David Dorvile, a Bahamian of Haitian descent.

Felix Timothy, a relative, told The Tribune his cousin David was aged about 47 and worked at City Services. He received a call around 3pm of the tragic news.

According to reports, the tank was being cleaned at the time. One of the men went down in the pit first. When he failed to return, a second man went in to check. When he did not return, the third man went in.

Assistant Superintendent of Police Stephen Rolle said police received a report around 4.15pm of an industrial accident at the City Services property which is located in the industrial area, just north of the container port.

“These males were doing some work in the floating tank and they all became unresponsive,” he said.

Mr Rolle said that an employee from an adjacent property came over to assist with the removal of three lifeless bodies from the pit.

When The Tribune arrived shortly after 5pm, the bodies were still lying on the deck of a floating tank, which was filled with scrap metal.

Even with a mask on, you could still smell a chemical odour in the breeze.

EMS personnel called to the scene pronounced the men dead, ASP Rolle reported. The bodies were taken by three hearses to the morgue.

ASP Rolle said investigations are continuing into the matter and an autopsy will be carried out to determine the exact cause of death.

The identities and ages of the deceased men are being withheld pending official identification, Mr Rolle said.

When asked the nationalities of the men, Mr Rolle confirmed one is said to be a Bahamian, a Dominica and an American who lived in Grand Bahama.

ASP Rolle indicated that the men went in the pit one at a time.

“We cannot say the depth of the pit, but there is some depth down there,” Mr Rolle said.

He said when police arrived the bodies had already been retrieved from the tank, with the assistance of a fourth man who worked on the adjacent property. 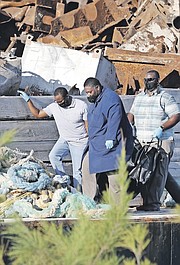 Mr Timothy said David was the father of one child, who lives in Miami, Florida.

He was very shocked to learn of his cousin’s death.

“I got a call at home around 3pm about my cousin,” he said. “This is a very serious situation when you send a person inside a stinky hole with gas; they should have someone on top to keep eyes on them.

“You let people go in there by themselves and nobody check on them for hours after hours. You don’t see them and that’s when you check?

“I received a phone call and it shocked me. Someone said, ‘You ain’t hear what happened, ain’t nobody call you?’ Then they say David die. I said who David? My David?”

Mr Timothy said his cousin David was a hard-working man who was always by himself.

“I feel bad, this is terrible. How would you feel if someone close to you was walking, and next you hear someone say they are dead – that shock me, I feel very bad about that,” he said.

“..The tank that stinks with gas in there. That is not safe.”

Two hearses from Restview Memorial Mortuary left around 6.45 pm with the bodies of two men, and the third hearse from Russell &Pinder left with the third body shortly after.

Truly tragic and obviously a very sad incident for the family members of the deceased. They, and the lawyers who are already no doubt clamouring to get involved on their behalf, should have a very good negligence case with the ability to look straight through City Services Ltd. to the Grand Bahama Port Authority and its key representatives.

This is what happens when greedy enterprises are penny wise and pound foolish, resulting in the failure to hire appropriate experts to advise on proper measures and safeguards to protect against harmful and fatal mishaps involving highly toxic and very dangerous waste materials.

There is no health and safety for construction here in the Bahamas, no one is ever held liable. This isn't an accident, this is willful neglect of basic safety procedures. This is basic confined space training. When will the government step in and mandate that health and safety be followed in the work place?

When we have a reliable, responsible government filled with caring persons with common sense. I shouldn't hold your breath!

This is exactly why we need a regulating body such as OSHA here. There are too many unsafe practices being done with no one to monitor.

If they had been under a standard, first thing would have been to use a O2 detector to read the O2 levels, secondly once they would have gotten the reading the space would have to be vented the entire time someone was in it, and lastly with an enclosed space continuous monitoring would happen, which includes having someone stationed outside the entry to continue monitoring the air quality.

Smh...a needless and tragic waste of three lives cause as usual anything goes in The Bahamas. Smh...