20 New Cars To Help Crack Down On Crime 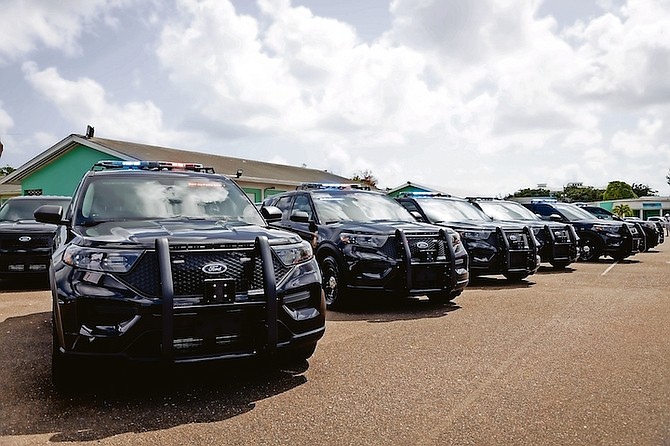 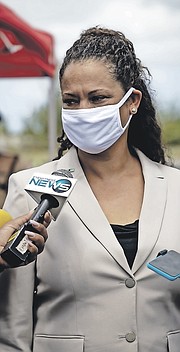 US Chargé D’Affairs Usha Pitts speaking to the media.

The Interceptors will be used in Nassau, Grand Bahama, and the Abaco islands.

The SUVs will also replenish part of the fleet that was lost during Hurricane Dorian.

According to the US Embassy, the State Department’s Bureau of International Narcotics and Law Enforcement (INL) provided the funding for the donation after Hurricane Dorian destroyed approximately 100 RBPF vehicles on Grand Bahama and Abaco.

Speaking on behalf of the American government at the handing over ceremony yesterday, US Chargé d’Affaires Usha Pitts noted that “these Ford Interceptors are a wonderful, small example of the friendship between the United States and The Bahamas.”

National Security Minister Marvin Dames thanked the US for their donation stating that “we can’t do it alone. Through partnerships we can do amazing things, and we’re doing it.”

“It’s one thing to hand out cash; it’s another thing to have the bureaucratic fortitude to stick with a project and see it through to the end,” the Chargé d’Affaires noted.

Mr Rolle explained that the pandemic impacted the manufactures.

“Ford was mandated to make ventilators and the president ordered that Ford discontinued manufacturing vehicles and concentrate on ventilators for the hospitals.”

In a press release the US Embassy explained: “These Interceptors — valued at just over $1.1m — expand on another recent donation of six police vehicles valued at approximately $300,000 dollars that were delivered in February, bringing the value of vehicle donations from the U.S. Embassy in 2021 to about $1.4m. The 20 vehicles delivered today are fuel-efficient hybrid SUVs, helping to reduce fuel costs and sustain increased police patrols in areas with high crime.

“These latest vehicle donations exemplify the strong partnership between the United States and The Bahamas. It also compliments the United States’ ongoing support for citizen and border security in the archipelago, following a donation in December, 2020 of six Mercury Verado boat engines valued at over $168,000 dollars to the Royal Bahamas Police Force (RBPF) Marine Support Services Unit and Bahamas Customs Marine Unit.”

And most of these new vehicles will not be road worthy in a couple of years at most.

We are left to assume that US Chargé D’Affairs Usha Pitts is unaware most Bahamians would have preferred a generous donation of personal protection equipment to our public health system. Oh well, as the saying goes, beggars can't be choosers.

… by Monday, the batteries will be missing from 17 of them.

I think you meant 21

Sigh I guess theyre trying to help... we need more. We need the corruption beans to get spilled. Weed them all out.

We got 20 cars a valued at 1million. Yet back in 2018 the govt distributed 50 cars valued at 6million. The maths just dont add up......whho thief di money

Why is it that we continue to think negatively about ourselves? We will never become a competitive and prosperous nation until we believe in our ability to transcend past development indiscretions. Every nation on earth has gone through periods of crime and decadence. What is required is a leader with a vision who can take us forward.

Take for example Singapore. This was a decadent and corruption rife nation until Lee Kwan Yew became the Prime Minister. He was able to inculcate new values and a new culture of thrift and productivity. It was not an easy task but he was successful. Some people said he was too tough and others said he was a dictator. But what do we have today for Singapore? One of the world’s most disciplined, productive and competitive nations on the face of the globe.

This is precisely the kind of leadership we need in the Bahamas . And this is the type of leadership being provided by the Right Honorable Prime Minister Dr. Hubert Minnis.

I am amazed when I read the negative comments written by some individuals who would like to see our nation continue as is. However they need to be reminded that slackness, laziness and foolishness are things of the past. Under the FNM things will change for the better.

Could you imagine Lee Kwan Yew getting involved with bribery and debauchery and members of his Cabinet demanding and taking bribes and sexual favors from known international sexual perverts like Nygard?

So when we say nasty things about our culture please know that culture is not static. It can be changed through leadership and transformation of our values via our social institutions.

Please let’s rock with the Doc. And do not turn back the clock .