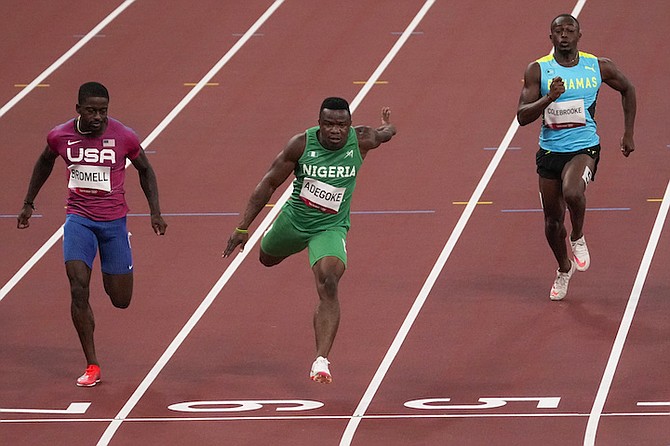 Enoch Adegoke, of Nigeria, centre, wins a heat in the men's 100-metre run at the 2020 Summer Olympics, Saturday in Tokyo. Samson Colebrooke of The Bahamas is on the right. (AP Photo/Charlie Riedel)

TYNIA Gaither’s bid for a spot in the final of the women's 100 metres and Samson Colebrooke's attempt to get out of the first round of the men's 100m heat fell short on Saturday night at the 2020 Olympic Games.

As the much anticipated races got underway on what is considered a fast track at the Tokyo National Stadium in Tokyo, Japan, the Grand Bahamian clocked 11.31 seconds for seventh place, but it wasn’t enough to get her one of the eight lanes in the finale of day two of the track and field competition at the games.

The 28-year-old, in her second appearance at the games, finished 21st overall out of lane three as she couldn’t make up the real estate left to stay next to Jamaica’s Elaine Thompson-Herah, who, in lane four, surged to the front of the field in 11.76 for the second fastest time going into the final.

Also advancing out of the heat with the second automatic time was Switzerland’s Mijunga Kambundji in 10.96. American Teahna Daniels ran a lifetime best of 10.98 for third place to secure one of the two fastest losing times to book her ticket into the final.

Gaither, a graduate of the University of Southern California, will now turn her attention to the 200m where she will be joining reigning Olympic 400m champion Shaunae Miller-Uibo and Anthonique Strachan. The heats will get underway on Monday.

There was some controversy surrounding the entry of the participants with four women qualified. The Bahamas Olympic Committee’s management team solved it through a runoff between Strachan and Grand Bahamian Brianne Bethel on Friday in Tokyo, just before the final entries had to be submitted.

Coming out for his debut in the men’s century, Colebrooke placed seventh in the second of seven heats in 10.33. The 24-year-old graduate of Purdue University, where he was coached by Bahamian Norbert Elliot, came into the event with a personal best of 10.01 and a season’s best of 10.18.

The Exuma native finished 44th overall in the field. The top three automatic qualifiers from his heat were Nigeria’s Enoch Adegoke in a lifetime best of 9,.98; Qatar’s Femi Ogunode in 10.02 and Great Britain’s Zharnel Hughes in a season’s best of 10.04.