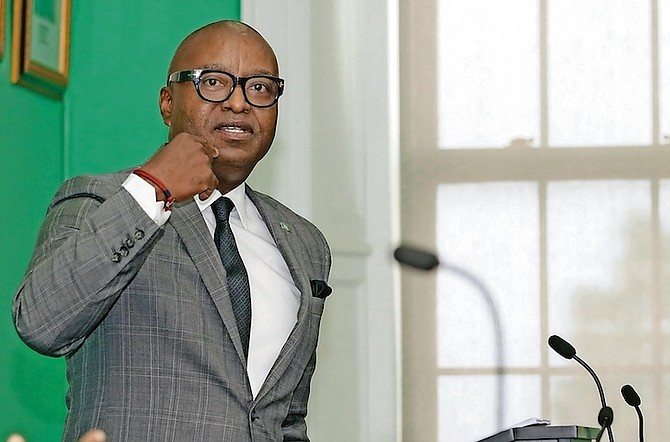 NEARLY two years after Hurricane Dorian, Minister of Foreign Affairs Darren Henfield said yesterday that construction will begin on five model homes in Abaco donated by the Bakers Bay group within the next three weeks.

Speaking on plans to fulfil the homeownership dreams of Abaco residents, the North Abaco MP also said the Ministry of Housing will replicate its service lot initiative on the island, with some 60 homes to be built at the end of the project.

“Early on, we identified three potential sites in Abaco to develop the type of communities envisioned. These include Central Pines — more westerly toward Murphy Town’s Southside Road area; Spring City and Wilson City. Separately, from the mentioned identified sites for the development of service lot communities — through potential public, private, partnerships as envisioned by the Prime Minister — the DRA has already cleared the proposed site for the building of homes donated by the Bakers Bay group.

“It is anticipated that construction on five model homes in that community will commence within the next two to three weeks. I am also pleased to say that the Ministry of Housing —through the government’s service lot land initiative— is poised to replicate its Carmichael initiative in Central Pines. It is contemplated that by the end of the development, some 60 homes will have been built. Phase one of the project, which anticipates the building of some 20 homes will commence before the end of the summer.”

Mr Henfield said the government, despite its best efforts, cannot repair all of the damage caused by Hurricane Dorian.

“Permit me just to say here that this Minnis led administration — through the operations of the Disaster Recovery Authority (DRA) — is committed to ensuring that every homeowner that has been assessed and approved by the mechanisms employed by that agency will receive the assistance promised by the DRA,” he said.

He said help from donors is also needed.

He added that an initiative dubbed “Operation Work Speed” — which is intended to augment and not compete with existing governmental and private restoration efforts in Abaco — will provide more help.

In the first instance, the programme will focus on those in need of labour and others in need of material, he said.

“Thus far, some 95 plus homes have been assessed as to their existing needs and it is anticipated that five of these homes will be addressed in one way or the other within the next two weeks.”

They spent 6 million on domes, where are they?

Dome homes (or lighthouse shaped) would be the BEST solution for islands in a hurricane zone. WHY this SIMPLE solution is NEVER acted on is beyond me. (The lack of angles keeps the structure from buckling or being destroyed by hurricane winds...)

Someone should let the government know!

"within the next two weeks"

The domes were supposed to be completed December 2019.

But "within the next 2 weeks canna do". That is when the vaccines are arriving and they have a photo shoot in the sun on the taxiway.

Henfield has always been nothing but a 'do nothing' pathological liar of the highest order like so many others Minnis foolishly allowed to be put on the FNM party ticket in the last national general election. And true to form, Dumbo Minnis has allowed the very worthless Henfield to remain on the FNM party ticket for the next national general election. Meanwhile the very corrupt Sidney Collie continues to enjoy, as Minnis's personally hand picked Bahamas ambassador to the US, quite the lavish life style in the US.