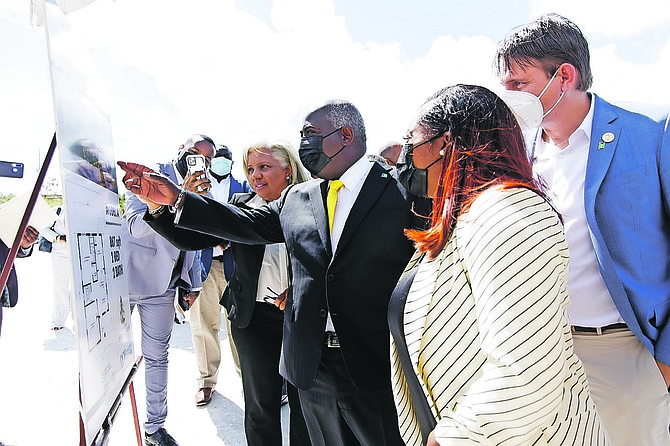 THE former administration only partially built five out of more than 50 homes planned for the Central Pines subdivision in Abaco, after homes in the area were wiped out by Hurricane Dorian in 2019, Prime Minister Philip “Brave” Davis said yesterday.

Mr Davis said his administration is now removing the responsibility of this project from the Disaster Reconstruction Authority and placing it under the remit of the Ministry of Housing to build the remaining 48 homes.

His comments came at a groundbreaking event for the government’s Central Pines Abaco housing project where he promised to carry out several initiatives to help residents bounce back from Hurricane Dorian.

Mr Davis credited Abaco residents for remaining strong and working together to salvage their lives and communities in the most difficult conditions.

He said the least Abaco residents deserve is an effective and supportive government, as he committed to “fixing the operational issues and inefficiencies that have acted as obstacles and slowed progress” in rebuilding.

“During our assessment, we found that the affordable homes programme in the Central Pines Subdivision - which the previous government introduced - had only partially built five of the 53 homes planned for that subdivision with the Disaster Reconstruction Authority at the helm,” Mr Davis said.

“It took two years to build fewer than 10 percent of the promised homes. Many excuses were offered, but excuses can’t put a roof over a family’s head at night. Excuse(s) can’t protect our children from the elements.”

“We are moving the responsibility for those lots from the DRA to the minister responsible for housing. I am confident that we will see efficiency and progress under her leadership,” said Mr Davis. “Minister Coleby-Davis is a woman of action – and that’s what people here need and deserve: action.”

Mr Davis said that not only were the “homes being built at a snail’s pace” but plans had been redeveloped “so that multiple homes would occupy a single lot, and the materials did not live up to the quality and style of the neighbourhood”.

He said this led to concerns that this approach would lead to a devaluation of homes and lots in the subdivision.

“We could not allow this policy to continue,” Mr Davis said. “Our partnership with local small contractors will lead to the building of 48 homes in this subdivision, consistent with the standards envisioned for this neighbourhood while also being offered at a relatively low cost.

“We will create opportunities for local contractors through public-private partnerships while providing quality, affordable housing to dozens of families. You see, we don’t believe that just because the people of Abaco urgently need housing, we can build any old structures. People deserve to live with dignity.”

Mr Davis encouraged all interested residents to visit an open house where teams from the Department of Housing, the Bahamas Mortgage Corporation and private financial institutions were present to process applications and pre-approve them on site.

“We are committed to swift progress, and what you see today is only part of our plan for the restoration and development of the Abacos, which also includes a renewal of the Small Home Repairs programme; a new phase of debris removal; completion of the main shelter in Abaco; more solutions for those currently in temporary housing and establishing a solution for much-needed rental units,” Mr Davis said.

Davis is always talking about spending money as if it grows on trees. You never hear him talking about introducing meaningful policies aimed at enabling the private sector to grow and create decent paying jobs.

Because Davis does not have a clue. All the years he represented Cat Island and Rum Cay and never has done anything for them. That shows you the type of PM he will be. DO nothing but take home the money.

You never put a person who has done nothing in leadership and expect something to happen. Never works.