‘Judge’s ruling is wrong and we’ll be fighting it’ 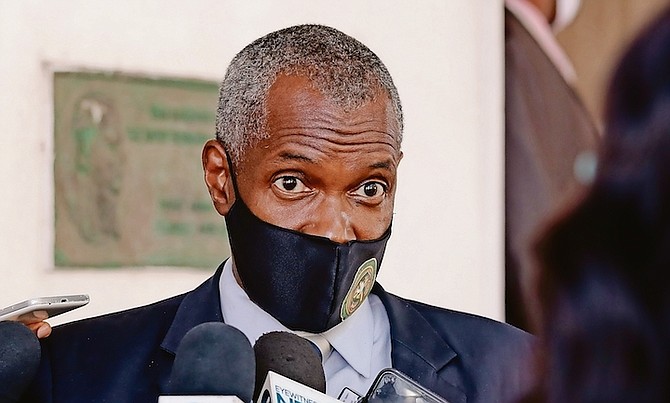 WORKS Minister Desmond Bannister criticised a Supreme Court ruling which bans the government from further demolishing shanty town structures across Abaco, saying it has set a “dangerous” precedent that has “usurped” the power of the Ministry of Works.

He also said the decision would create “open season” for anyone to illegally build on land they do not own.

In her ruling on Monday, Supreme Court Justice Cheryl Grant-Thompson ordered an extension of her injunction to include all unregulated communities in Abaco. The injunction prohibits the government from evicting shanty town residents and disconnecting services in their communities.

She ordered the government to “cease and desist” from “any further interference” with the respective communities until the outcome of a pending judicial review and also admonished officials for moving to demolish the structures without first getting approval from the court.

Justice Grant-Thompson’s ruling comes after the Ministry of Works spearheaded the demolition of 45 “incomplete and unoccupied structures” in The Farm shanty town in Abaco in April and followed up with further demolitions last month.

Yesterday, Mr Bannister called the ruling “a flawed decision” and “wrong in law”.

“The Free National Movement is a government of laws as we respect the law and insofar as that decision represents the law right now we’re going to follow it, but I just want y’all to think in a democracy you are entitled to criticise decisions,” he said.

“In my view, it is a flawed decision. It is wrong in law. It is wrong and we expect that we will have it overturned and I’ll tell you why. There were two injunctions in place. The first injunction prohibited the government from demolishing shanty towns and buildings and structures, etc. The second injunction stopped people from building those structures. Every one of those buildings that we were demolishing on The Farm was built contrary to the court’s injunction.

“. . . You have a judge who has made the decision, and I want y’all to understand how dangerous this is for the country right now, that we can’t demolish these structures unless we go to her. What that has done is, she has usurped the statutory powers of the building control officers in the Ministry of Works. She has usurped the statutory powers of officers throughout the various ministries in the country and the judge is now determining whether they could carry out their duties in accordance with the law—that has to be wrong.

“The second thing is this—it is now open season for anybody to go on any land and put up any structure they want and not comply with the law. So you can have your land wherever you want. Somebody could go there, put up a structure on it and the building control people, instead of being able to enforce the law, even though they don’t have a permit for it, are going to have to go apply to this judge to be able to come and demolish that structure.”

Mr Bannister also said the ruling “doesn’t make sense” and is not “worth the paper it is written on”.

Outside of Cabinet yesterday, Attorney General Carl Bethel said he met with the counsel involved in the matter that morning and restated the government’s intent to appeal.

“We respectfully disagree with the reasoning of the learned judge,” Mr Bethel said. “We respectfully disagree with the conclusions arrived at by the learned judge and we will be appealing or seeking leave from the judge to appeal on the basis of urgency to the Court of Appeal where we hope that this matter will be definitively resolved by the Court of Appeal.”

For his part, North Abaco MP Darren Henfield said the government is interested in regulating buildings in The Bahamas as he highlighted his concerns about shanty towns.

“I’m concerned about the environmental degradation. I’m concerned about unregulated buildings. I’m concerned that we’re in the hurricane season again and we saw what Dorian did with shanty communities in Abaco. We were there. We saw it, many of us. The Mud, The Pea, Sandbanks all destroyed – portions of The Farm. Lots of lives lost. That’s the interest of the government to regulate buildings in The Bahamas,” he said.

This has become a mess. The way he explain it does sound like a bunch of shit tho. I don't understand how the judge have more power than the leader of the country. I thot he cudda ova rule erryone cept the governor general or sumtin....ine kno. I don't think she understand fully what she do. Ya done cant stop the boats from coming in with illegals, now no one in control or overseeing who and where they going to build na. Common sense would tell you a whole shit load of people coming to build in that area na. Try put yp something b4 the injunction ting ova. If they mash down 20 home, when they go back after dis whole court ting it ga 60 new homes. Watch da wibe. I wonder if that judge should even be allowed to BE a judge in our country anymore. Her decicion could have consequences beyond control. For instance 60 go up an hurricane hit an we have a repeat event. Its highly possible because, during the pandemic where these people get money from to build a properly regulated house? Building a house up to standard structure wise don't take 2 an 3 days. So if they don't have funds to do that den wat kind of house you think they gonna build? And i could hear people talking bout kids and stuff and a roof over your head, but if that roof be the same roof to fall on you an your family an kill yall how worthwhile was a shanty home? If that home gone have you under the impression that you SAFE, but when a storm comes it get destroyed along with you then what? I would not want to put my kids in a house i know aint safe because now im endangering them even more than not having a house. One ting i have come to learn bout the government, that is it seems like only the white man signature on a contract and a supreme judge could stop them from doing what they want. Lol that signature on that BPL oil drilling contract the sword of god to the government.

You do not want to live in a country where the elected (or not) leader has more power than the courts. then you would be somewhere like Myanmar, China, North Korea, Venezuela, Cuba, etc. etc. watch what you wish for bulla

It certainly seems Minnis, Bethel, Bannister, Johnson, etc. have found an accommodating Supreme Court Justice like Cheryl Grant-Thompson to provide them, and the entire FNM party leadership, with the cover needed to once again just kick the can down the road.

Rather than taking urgently needed action to address the explosively growing shantytown crisis, which is integrally tied to the unchecked and out-of-control illegal immigrant crisis, it appears our most senior elected officials with the help of a most accommodating Supreme Court Justice prefer instead to have our country's laws selectively enforced to suit their own interests and political agenda, and be damned The Bahamas and the Bahamian people.

Cheryl Grant-Thompson's ruling means our small financially crippled and very fragile nation will continue to be crushed both economically and culturally by these lawless shantytown communities that are now sprouting up everywhere at a torrid pace. Chief Justice Brian Moree should have long ago intervened rather than idly sit back and allow the court system to be used in such a disgacefully abusive way.

It's all too obvious that Minnis and his AG Bethel will do whatever it takes, including using the courts in a devious way, to ensure the large population of voters in our country of Haitian ancestry do not feel alienated in a national general election year. And of course one of the big beneficiary in all of this deviousness, is none other than QC Smith in his quest to make us Bahamians second class citizens in our very own country.

Everyone get so emotional when it comes to the Haitian issue. All the learned judge said, was allow due process to be complete. There is an injunction in place for some shanty towns. It is judicial courtesy to wait for a ruling to see whether you are within the law. You don't ran off and go to another Shanty town and do what prompted the first injunction. Yes, we understand that the government needs to score browny points before election.

Cheryl Grant-Thompson has been deliberately dragging her heels on this most important and urgent shanty town matter ever since the original injunction was put in place a long time ago. And Minnis and his flea-ridden AG Bethel just haven't seen fit to have her address the matter with any great despatch.

The judiciary is broken and has been long before Cheryl Grant-Thompson was appointed to the Supreme Court. We can't get murders heard in a timely manner.

A politician or civil servant can do only that which the law allows, A private citizen can do anything save that which the law prohibits. A point not understood by Mr. Bannister, obviously. NONE OF THEN HAVE ANY POWER! They Have Authorities as delineated by the RULE OF LAW! FULL STOP! That they exercise extraneous "Powers" is why the Country in the mess it is in. Their Authority has to have limits, or you end up with PIndlings, Hubbigities and Minnis's Micro Managing every aspect of Civil life and opportunity. (note, there isn't any) Civil servants have no power to Deny anything, but simpley to ask for the provision of what the law requires be submitted for a rubber stamp approval. However, it is the people who are at fault, thereby allowing a constant stream of malfeasant imbeciles to be elected. This whole "permission denied" or "stalling" is garbage created by those who would rule, not govern! I say the above to say this: we were not capable of self determination and Independence then nor are we now.

The first time the Ministry Of Works Realizes That They Too Are Subject to Law And That They Are Not The Law. LOL. if MOW did their job the way it is supposed to be done, ALL OF THIS WOULD NOT BE AN ISSUE. Plain and simple the Ministry of Works F'ed up repeatedly over the past 40 years and now we have to try and fix it. Better to move on, accept the F up and tidy up the house going forward. Just because you f'ed up doesn't mean you don't have to follow the laws. In order to prove guilt you have to do just that prove guilt.

Desmond is out of his depths on this. How do we know none of those buildings were erected more than 21 years ago? How do we know they did not get permission to build there? All the records of Min of Works in Abaco were lost and destroyed in 1999 and again in 2019. Why does Min Of Works never deal with the huge number of open cesspits and septic tanks without covers (both extremely dangerous for small children), the homes built too close to the road (one new commercial one in Abaco is about 3 feet from the road boundary. how about the Central Pines where rules state 1 building per property but so many now have 3 and 4. No commercial activity in central pines but guess what? MOW lost its integrity when it applied to rules to one person but not another which started 40+ years ago.

You obviously didn't see any of the aerial photographs taken of the current shanty town areas in the immediate aftermath of Dorian.