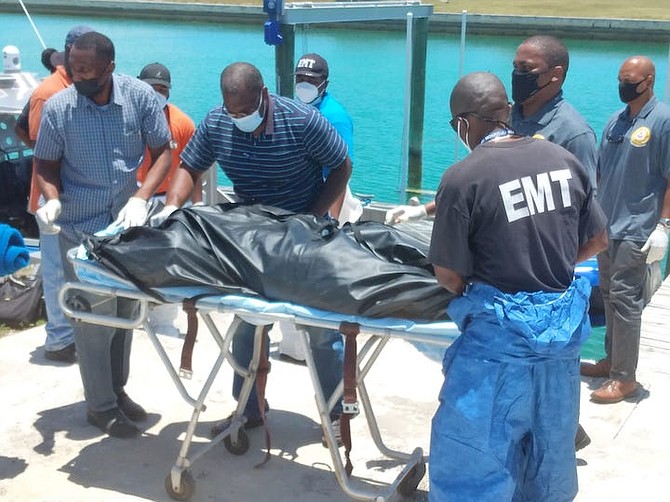 The body of one of the two fatalities on a stretcher at the Police Marine Base in Lucaya. Photo: Denise Maycock/Tribune staff

The survivors at the Police Marine Base

TWO Haitian migrants are dead and eight others, including a baby, were rescued after the boat they were on capsized in waters off Memory Rock, Grand Bahama, on Friday morning.

The bodies of an adult female and a male juvenile were discovered inside the overturned vessel by officers of the Police Marine Section. Both are believed to have drowned. 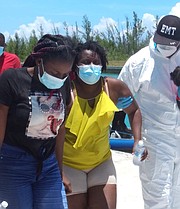 Survivors being helped at the Police Marine Base. Photo: Denise Maycock/Tribune staff

The nine survivors were all found clinging to the capsized vessel several miles off Memory Rock, West End.

It is believed that the group of Haitian migrants was heading to the United States in an illegal smuggling operation when the tragedy occurred.

Assistant Superintendent Stephen Rolle, police press officer, reported that the incident happened shortly before 9am on Friday when the Police Control Room received reports of a capsized boat some seven miles off Memory Rock.

“The Police Marine Section, along with Customs Marine Section, went to conduct an investigation, and upon arrival, they saw the capsized vessel with eight persons hanging on who appeared to be dehydrated,” ASP Rolle told reporters.

“Upon a further check of the vessel, they (the officers) discovered two persons submerged in the vessel under the water, an adult female and a male child. At the time, they both appeared to be lifeless,” he said.

According to a press release, the deceased were found in the cabin of the 20ft vessel, equipped with two outboard engines.

The rescued immigrants and the two deceased victims were taken by a police vessel to the Police Marine Base, near the Grand Bahama Yacht Club, in Lucaya.

Immigration and Customs officials met the vessel on its arrival shortly after noon at the Police Marine Base. A hearse and two ambulances were also on site.

Survivors are pictured in a police vessel. Photo: Vandyke Hepburn

The migrants were kept on board the vessel for nearly two hours. At one point, some of the female survivors could be heard crying, and asking for relief from the hot sun.

A doctor and several nurses from the Disease Surveillance Unit of the Public Hospitals Authority were present to assess their condition.

When asked about the condition of the other survivors, he said: “A young baby was among those rescued in this latest incident today, and at this point, they are being treated by a local doctor. We are unable to say the exact extent of their injuries.”

He is appealing to migrants of all nationalities to stop risking their lives at sea in such a “dangerous” way.

“I urge persons of all nationalities who tend to take this venture to get smuggled into the US for a better way of life that it is a very dangerous journey, and I want you to think twice before you decide to make such a trip with anybody going to America. As you can see today, it can result in death,” ASP Rolle said.

He said that officials are unable at this time to determine exactly where the group of Haitian migrants came from.

“But…it appears they were trying to get smuggled to the US,” he added.

Asked whether there was a boat captain, he said: “We cannot say if he was on board during this incident, but police are investigating the incident.”

He said that the US Coast Guard plays an integral role in sea rescue operations. “The USCG normally assists with these types of (rescue) missions, and yes, they were part of this operation this morning. They provide air surveillance services that assist police with finding this capsized vessel,” he said.

• This story has been updated to say that there were eight survivors – not nine, as originally stated.

The sea has been rough It is not a good idea to go off in small boats.

I am sorry for all loss of life.

QC Smith, Justice Cheryl Grant-Thompson, Minnis, AG Bethel, Henfield, Bannister, Johnson, Campbell and others like them all bear great responsibility for having invited these illegal immigrants to our shores in the first place.

The right message has yet to be loudly sent to the greedy human traffickers and their Haitian customers back in Haiti that our country will be enforcing its immigration laws to the fullest extent possible and that illegal immigrants will be arrested and detained until their repatriation on a sustained basis with no let up going forward.

The US is having similar problems with its Southern border and people are also losing their lives trying to enter the United States. Smugglers are dropping young children over 14-foot walls and leaving them with nothing but a phone number. Many are not only trying to escape the violence and hardships in their own countries, but the lure of an easier life and an economy that is expected to boom with a $15 minimum wage it too much to resist, But it is not only human smuggling on the increase, but drug smuggling is also on the rise. Maybe the absence and the fear of Donald Trump, makes smugglers more brave and bold,