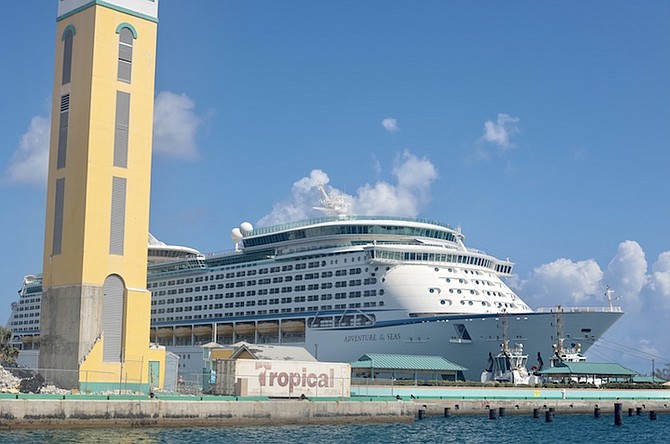 “So after 15 months of not sailing from the Americas, I am really, really happy that the ‘Adventurer of the Seas’ is home porting here in Nassau and she is going to sail her inaugural voyage from Nassau tomorrow (Saturday) and we are incredibly excited to be here this weekend,” Mr Benford said on Friday.

“We have thousands of our guests who have flown in from all over the world, mostly from the United States and they are going on a seven night voyage from Nassau and a week later they will return and we’ll have another ship of cruise passengers departing from Nassau. So we are super excited.

“Once those guests actually fly into The Bahamas, mostly from the United States … a lot of folks came in days ago …. so they were booking stays in hotels so you are seeing hundreds of hotel nights that have been booked by cruise passengers which is great for the economy.”

Mr Benford said that Royal Caribbean is doing everything to ensure the safety of its passengers, crew, and the people of The Bahamas.

“We are going to start at reduced capacity,” he explained. “We are going to start at a little bit less than 50 percent. The most important thing is that we return to cruising safely. We’ve worked for many, many months on a set of protocols to make sure that we keep not only our guests safe, but most importantly we want to make sure that we keep the people in The Bahamas safe as we return to cruising. We are also changing the way some things work on board the ship.

Mr Benford said there are two types of cruises that will come to The Bahamas and both will be beneficial to the people of this country.

“There will be two types of cruises,” he explained. “(Saturday) we start with the homeport ship. As it relates to the economy, one of the first conversations we had for example was with Bahamasair. So Bahamasair started to figure out how they were going to ramp up flights and fill seats on planes which was a very good thing.

“And, then once the cruisers return later in June and early in July from the United States, Nassau will be a port of call day. Folks will come in early in the morning, they will take tours. Thousands of people will be taking tours. They will be shopping, eating at local restaurants.”

Grand Bahama will not be left out, he said. “I think it’s great, not only for Nassau but we are also going to be in Freeport, Grand Bahama as well,” Mr Benford said. “For this inaugural cruise from Nassau, we are going to spend the whole day in Freeport. We have worked for months with the taxi association. We’ve worked with the people who own resorts … people who have attractions, just to make sure they are prepared and ready to receive our guests.

“We’ve been looking for years for additional capacity to bring our cruise ships and we think Freeport, Grand Bahama is a perfect place to do that. This is not just for Royal Caribbean, but we think the cruise ship industry has a lot of opportunity for growth in Grand Bahama so we are excited to be a part of that work.”

He said over the next year Bahamians will see the start of a transformation in Grand Bahama as it relates to the cruise industry and Royal Caribbean is happy to lead that effort.

He also said how excited guests are to return to cruising.

“I flew in yesterday. The airport was full of people at the immigration line. There was a long line of people when I checked into the hotel. The line was wrapping around so the energy is really high.”

we are looking at maybe acquiring the Our Lucayan Hotel

Did the government say some time ago a long time ago it would be sold in eight weeks?

as long as we know the only reason theyre here is to bypass stricter laws for sailing out of florida under COVID. word to the wise, dont do any long term planning on the home porting model.

Who gains more - cruise ships or The Bahamas? Given they are being locked out of destinations left right and centre I'd say they re desperate...can't trust a word they say..

Back channels are already saying the home porting is a temporary thing...ie 6 months.

Repost from earlier this morning:

I suspect more load shedding than ever will come this summer with the expansion of the port in Nassau to allow for the docking of more cruise ships and with the hotels starting to draw on the electrical power grid in a big way to accommodate their home port passengers.

Most residents of New Providence do not appreciate the extent to which the island's electrical grid is used by the huge floating hotels whenever they are in port. This is yet another 'big negative' associated with these monstrous cruise ships owned by the likes of Royal Caribbean and Carnival. They need us much more than we will ever need the pittance they contribute to our real economy all the while polluting our environment.

"Shore power, also known as ‘cold ironing’, enables ships to turn off their electricity generators and connect to local electric power that is supplied to the ship from the utility at the dock. Cold ironing is a shipping industry term that first came into use when ships started to be fitted with steam engines and ancillary machinery. When a ship was tied up at port there was no need to continue to fire the boilers and the machinery would literally cool down, eventually going completely cold, which gives the term ‘cold ironing’.

The rationale for supplying ships with electrical power from the shore utility supply while the ship is in port is to reduce pollution in the port area. Environmental considerations are becoming increasingly more important and the propulsion and electrical generation machinery of ocean-going vessels contribute to global air pollution by their exhaust gas emissions. These emissions are particularly significant for cruise ships when berthed in ports because of their constant need for ancillary power to meet domestic loads of lighting and heating, ventilation and air conditioning requirements."

Credit: Geoff Cronshaw, The Institution of Engineering and Technology, a registered as a Charity in England and Wales.

Nassau does not offer shore power at its berths neither does Freeport. And I doubt they ever will....

ship makes us the home port, yet the straw market is closed. No plans placed to have Bahamians prepared and working to offer these visitors a Bahamian experience with Bahamian made crafts and souvenirs.