Moree: Be careful about criticism of the judiciary 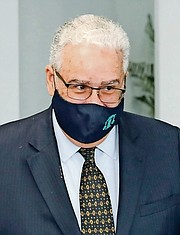 Sir Brian — who stressed he did not want to comment on the matter specifically — said while people are entitled to disagree with a judgement, the comments have to be “tempered”, “measured” and “respectful”. He added that the country has “to be careful that one branch of government doesn’t denigrate another branch.”

Mr Bannister also said the ruling “doesn’t make sense” and is not “worth the paper it is written on,” suggesting it set a “dangerous” precedent that has “usurped” the power of the Ministry of Works.

Attorney and activist Fred Smith, who represents the applicants in the case, later told The Tribune that Mr Bannister’s response was “scandalous” and brought the administration of justice into disrepute.

When asked for a reaction yesterday, Sir Brian said: “I don’t want to respond to that specific matter but I would say this: everyone is entitled to criticise a judgement or to disagree with a judgement.

He later said: “I don’t want to say more about it than that or address the specific comments. I just think we have to be careful that one branch of government doesn’t denigrate another branch and that we address these matters with respect and with temperance.”

The chief justice argued the proper process is to appeal a judgement if an individual thinks it is wrong. Attorney General Carl Bethel has noted the government’s intent to appeal the ruling.

Sir Brian spoke on the sidelines of a ceremony where Neil Brathwaite was sworn in as a Supreme Court justice. Mr Brathwaite was among the five appointments that were announced by the Judicial and Legal Services Commission recently to be appointed to the Supreme Court.

Mr Brathwaite said he expects initially to be assigned to civil matters and expects, having regard to his years of experience, to eventually be assigned to criminal matters.

He said the honour means “a great deal”.

“I have always felt that the Supreme Court bench is the apex of the legal profession. So to have been selected after a rigorous process it certainly to me is a fitting reward and a culmination for the many years of work that I’ve put in and hopefully I will justify the faith that has been placed in me by those who selected me.

“With respect to the backlog my intention is to simply work as hard as possible to deal with whatever matter is brought before me and to try to do so in an expeditious manner,” Mr Braithwaite said.

The chief justice said previously that he hoped these appointments will help to tackle the backlog of cases in the judicial system.

Neil Brathwaite's appointment as a Justice of The Supreme Court is clearly a really 'BIG' deal....quite literally.

"He added that the country has “to be careful that one branch of government doesn’t denigrate another branch.”"

Yes its true, and very important, because all branches of government are part of the same mission, that is to confiscate the wealth of the people and nation and keep the people under control.

If our branches of government start bickering, they each risk loosing the respect of the people, and thus eroding the control of the masses.

It's just that simple...

Does "SIR" Brian actually think the public have any trust in our judicial system?🤣🤣🤣