Hopes For Completion Of $1.8m Abaco Centre And Shelter By Summer’S End 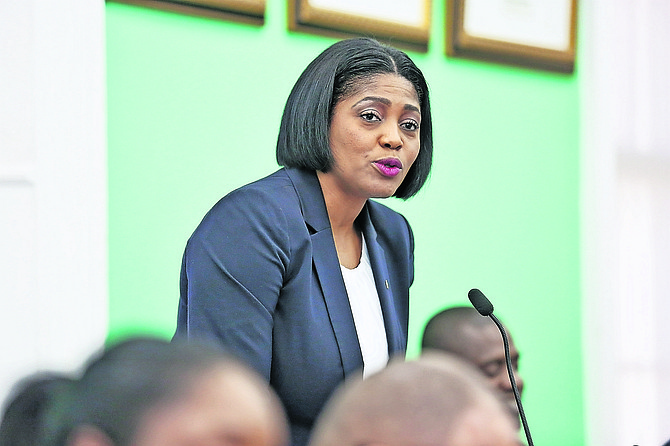 MONTHS after government officials broke ground for a $1.8m community centre and hurricane shelter in Abaco, State Minister for Disaster Preparedness Pakesia Parker-Edgecombe said construction work has officially started on the project, with officials hoping for completion before the summer’s end.

In December, Prime Minister Dr Hubert Minnis participated in a groundbreaking ceremony for the hurricane shelter and community centre, which he said will be capable of accommodating 800 people during a hurricane.

At the time, Dr Minnis said he expected the centre to be completed by May 2021, before the beginning of the next hurricane season.

However, that target was missed.

Yesterday, Mrs Parker-Edgecombe admitted that the project had been delayed, which she suggested was due to funding restraints. However, she said work has since commenced and added that officials are now hoping to have the development completed before the end of summer.

Speaking to reporters outside the Churchill Building, she said: “There was a groundbreaking. Work has commenced and there’s a delay in that not necessarily because of the fact that it’s not going to be completed. We are hoping that it is done very shortly.

“I know there is a concern in Abaco also in regard to some other housing issues so what we’re doing is we’re sitting at the table still and trying to figure out how best to move forward,” she added.

“Funding has always been an issue for us but we’ve been very grateful for the fact that persons are coming on board to assist us with that. I am hopeful, in all honesty, that it is completed before the end of the summer months because the reality is we would’ve wanted it to be done way before the hurricane season, but we are where we are and we’re going to continue to work toward having it completed.”

As a temporary housing solution, the National Emergency Management Agency budgeted $6.4m for temporary domes to be placed in both Abaco and Grand Bahama, with an estimated $4m committed to cost.

More than 100 domes have been erected on the storm impacted islands since then.

Yesterday, Mrs Parker-Edgecombe said the DRA is trying to determine whether more domes need to be erected in Abaco and added the agency is also appealing for help from the private sector to help resolve the island’s housing shortage issues.

“Again, funding has always been an issue for us and we are giving it our best and we are trying to help,” Mrs Parker-Edgecombe told reporters yesterday. “But the question now is whether or not those domes still need to be put up because they were supposed to be temporary so all of this that’s going on.

“At the moment, we’re trying to get to the best practice to assist those residents of Abaco, in particular because housing is an issue and we’re also appealing to the private sector and individuals who may want to go into Abaco to build rental units to do this,” she told reporters.

“. . .We’re having challenges as expected, but that doesn’t necessarily mean that we’re not going to continue to commit ourselves to our promises. We are going to ensure those residents get the attention they deserve.”

You have to know that the office of the prime minister (OPM) is conducting pre-general election campaign rehearsals when its puppet ministers, surrounded by a traveling entourage of 12 are seen popping up on Abaco's islands, towns, settlements, and cays?
Telling, considering its popoulaceslated with the out islanders most consistently lied to by the 35 House-elected Red MPs, yes?.

WOW! such distain and disconnect

I was under the impression that DRA was partnering with several other foundations to build the new community center/ hurricane shelter in Abaco and have received donations in that regard. Also, Darren Clarke, professional golfer, and The Abaco Club at Winding Bay have also solicited donations to help build the hurricane shelter.

I truly hope that the construction moves at a steady pace to ensure there is some form of shelter before we're in the midst of another hurricane. Godspeed!