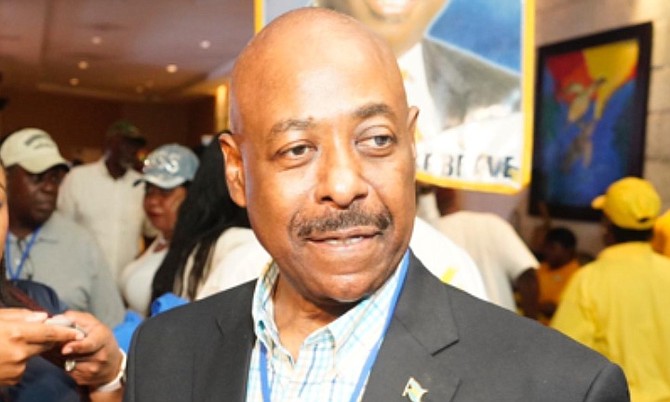 AFTER winning the runoff at the branch level, the PLP’s West Grand Bahama Branch believes former West End and Bimini MP Obie Wilchcombe will also come out ahead in the Bimini runoff tonight.

“We are very happy and excited that this part of it is finished in (West Grand Bahama). As you know Bimini is not completed and…so that is our next battle. So, we are happy it is behind us now. I have no doubt, he will be successful in Bimini also,” said Derek Delancey, chairman of the PLP West Grand Bahama Branch.

Mr Delancey said the association is endorsing Mr Wilchcombe, who was able to secure 154 of the 179 votes cast during the run-off for West Grand Bahama on Sunday.

Mr Delancey noted that except for Mr Astwood, none of the other five aspiring candidates came to the branch first about their interest in seeking the nomination for West Grand Bahama.

“Only one of the aspiring candidates ever came to the body that I’m responsible for,” he said. “All of the other names, none of them ever approached the branch; they never came to us and that is the way it is designed; to come through the branch. And that is why you saw the difference in the numbers yesterday. The branch votes before it goes to the council,” he said.

When contacted yesterday, Mr Wilchcombe said that he was pleased with the support he received on Sunday.

Mr Wilchcombe, a native of West End, first entered frontline politics after the general election of 1992. The former PLP MP for West End and Bimini also served as Minister of Tourism in the Christie administration. In 2017, he was beaten by the FNM’s candidate Pakesia Parker-Edgecombe, who won by some 263 votes.

He did not want to comment on the current MP’s performance. He said that he will leave that for the constituents to decide.

“I am from the school of politics where I like to focus on what I want to do. I believe that Pakesia Parker will have to speak to the people of the constituency and they will vote, and they will grade her.

“But, I can tell you this, without equivocation that I believe that West Grand Bahama and Grand Bahama in general needs real change,” he said. “It really needs to play a major role in the GDP of our country.”

Mr Wilchcombe indicated that he started some transformational programmes in West Grand Bahama.

“I don’t think people really appreciate the economic plan that was to be had predicated on the Administrative Complex in Eight Mile Rock and the new school in Holmes Rock. Those served as economic pillars…,” he said.

He stressed that there must be an economic plan in place to combat poverty. “If you don’t, then poverty levels will continue to rise, and unless there is a plan for economic growth, for instance, tourism, we are not going to get anywhere,” he added.

He said in order to revitalise the island, more is needed than just the reopening of the Grand Lucayan hotel.

“You are not going to be able to make tourism grow and be successful with just the reopening of Our Lucaya, you need at least 5,000 to 10,000 hotel rooms in Grand Bahama. And Grand Bahama and its airport have to become more vibrant. It has to be opened up, and it has to become a service for the entire world. And so, there are so many things I want to do, and I have a plan that I have written. I am hoping to be able to talk to the people about my plan,” he said.

Mr Wilchcombe thinks that West End has to be anchored on two things - tourism and fishing. “We have to immediately cause for the harbour to be dredged as we did in Bimini… and we have to consider reclamation of land to ensure we are doing more to protect the area during natural disasters, but be able to create economic opportunity,” he said.

He also said there are interests in hotel investments in West End.

“Now over the last several years since I have been out of office, I spoke with a number of individuals about it and investors. And I have a different approach I would like to see for the hotel now, and I believe that the plan I have could be and will be successful,” Mr Wilchcombe said.

As far as Bimini is concerned, Mr Wilchcombe said that the PLP created economic stabilisation for the island.

Like Leslie, Obie needs to sit down. Same old tired PLP. Guess Fred and Gray next.

This societal wart of a man couldn’t even pay his utility bills before he was first elected. Miraculously his personal financial situation improved greatly after he was elected. As everyone already said, this guy believes very strongly in serving himself first, second and third before even thinking about anyone else. I would rather elect a herpes infested goat than vote for him.

The scummiest of the scum bags are popping out of the woodwork. They can smell in the air that a snap election will soon be called and there's limited time for them to make their move in the hope of once again be able to ride on the glorious gravy train of political corruption. None of them seems to know or care that the current Minnis-led administration has run HMS Bahamas aground on a mountain of national debt with foreign lenders now turning their noses up at the stench of our country's very dismal economic prospects for decades to come.