DIANE PHILLIPS: King of the Waterfront – Lundy doin’ what he did half a century ago and lovin’ it just as much 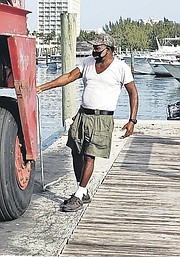 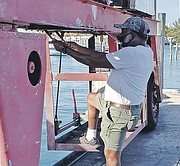 MENTION Bahamas waterfront and images of fancy estates and condos overlooking broad sandy beaches come to mind. But there are no swaying palm trees or wide green gardens on the other waterfront. It’s chockablock with side-by-side boats up on blocks, overflowing dumpsters waiting to be emptied, the sound of work shoes squeaking on oil-stained concrete paving, a radio blaring, men’s voices rising to be heard above the rumble of machinery.

This is the other Bahamian waterfront, the working waterfront.

It stretches in New Providence from the western end of Arawak Cay, along the bulkhead where oil leakage, battery acid seepage and years of dumping derelict boats have poisoned the water for swimming or fishing, all the way to the eastern end of the island where busy shipyards like Brown’s Boat Basin and Bayshore Marina are the lifeblood that keeps all those yachts, fishing vessels and leisure craft afloat, doing what they were built to do.

And here on this waterfront at a repair yard and marina known as Bayshore is where you will find Lundy Robinson.

At 69, Lundy is the unquestioned king of the waterfront. He’s humble, unpretentious, recognisable by the self-imposed dress down white v-neck undershirt and Sportif shorts that he’s worn every day for as long as anyone can remember.

He weighed 220 pounds when he started this job at age 16 and he still does today, 53 years later.

Most people couldn’t even tell you Lundy’s last name. They just know him as the man who hauls boats and, like the team quarterback, juggles the moves, so somehow he can lift one boat, squeeze it in by moving a few others, to make room for the boat that is just coming up the harbour and into the slip to be hauled, power-washed, painted or repaired.

It’s a giant waterfront jigsaw puzzle and no one has mastered the game like Lundy.

He doesn’t see himself as any kind of hero despite the respect he has earned from boat owners and captains the world over. He’s just grateful to be doing what he started doing more than a half century ago and loving it just as much as he did the first day. Not a day goes by that he doesn’t thank his lucky stars that he can earn a living on the water.

“A lot of guys started but I guess I am the last one left,” he says. With the passion as alive as ever, he has no plans to retire. “All I know is boats. I love the water, it’s where I get my life from. My wife knows if I’m not home or I’m not racing, I’m to the marina. I wouldn’t give it up for anything.”

Lundy does worry about one thing, the future of native sloop sailing, a sport many Bahamians, if not most, believe should be the official national sport.

Lundy has sailed in every class, from the largest A Class right through to E, and won more trophies than he can recall in boats usually with the name of Partner – Silent Partner, Crazy Partner. He believes sailing should be part of the national curriculum and remembers when boat builder Sheldon Gibson also taught it. With only a handful of sloop builders still living and the cost of racing climbing, he fears for its survival as a pastime, a builder and economic driver of communities and an activity with dramatic imagery unique to The Bahamas.

One thing he doesn’t worry about – where he will be in the morning. Right back at Bayshore Marina, operating the old travel lift that seems to be part of him and that no one else wants to take a seat in, though he has tried to train understudies.

So long as the king of the waterfront is still around and lovin’ what he has done since two years before the first cruise ship ever set sail for The Bahamas, that torn leather seat will remain a workman’s throne for Lundy Robinson.

SHOULD NATIVE SLOOP SAILING BE THE NATIONAL SPORT?

The images are dramatic – wooden sloops measuring 28 feet in length powered by massive canvas-like sails rising on 65-foot masts, defying gravity, with strong men hoisting, tacking, gybing, vying for position in anchor-start races unlike any anywhere on the globe. This is the world of native sloop sailing, a sport that began as a hobby and evolved into a slice of Bahamian culture and lore.

Sloop sailing got its start when a few boats completed their cargo run or sponging and were about to head back to the capital or whatever harbour they had set out from and one of the boats would throw out a prize – first boat to get to that floating bottle of rum would be the winner and the ride home would be a little happier for it.

Over the years, the sport took shape with racing becoming part-sport, part-passion and an economic engine with large crowds supporting vendors selling conch salad, macaroni and cheese, Kalik and more to locals and visitors who gathered on shore to watch the spectacle. With no mechanical advantage but just sheer muscle managing the sails and leaping in line on the pry board to become human ballast especially upwind, the sight has captured the eye of photographers and videographers who have documented the drama seen only in The Bahamas.

Over the years, there have been many calls to make sailing the official national sport of The Bahamas. There is a new Minister of Youth, Sports and Culture. Maybe if the call is loud enough, the new minister will cross the starting line with the wind in his favour. If you want to make your opinion known, comment on The Tribune site or e-mail diane@dpa-media. com.